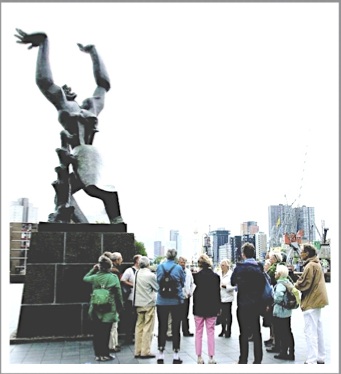 Rotterdam, bombed mercilessly in May 1940 by Hitler’s Luftwaffe, is famous for its Zadkine sculpture depicting the city without a heart. However, a walk through the urban centre on Saturday overwhelmingly convinced a trans-confessional group of ‘fellow pilgrims’ that God was reshaping the church of the future and restoring a heart to the city.
The popular image of a secularised city with empty churches, greying and dwindling congregations sidelined
by the march of modernity was totally contradicted by the stories we heard walking from church to church on both banks of the River Maas.
Over recent years, Together for Europe in Holland (Samen voor Europa) has organised citywalks in Utrecht, Zwolle and Amsterdam for members of both Catholic and Protestant movements to discover together common roots and common concerns. Unlike earlier walks, our emphasis in Rotterdam was more on the present than the past. What was God doing in the city today?
Starting at the only medieval structure left standing in  Rotterdam’s city centre, the Laurenskerk, we briefly visited various exhibitions in what has become a multi-functional centre for concerts, symposia and celebrations, as well as home for several congregations, Dutch and international. A permanent exhibition on the works of mercy Jesus spoke of in Matthew 25 offered an introduction to what we would see and hear on our walk: the feeding of the hungry, clothing the naked, sheltering the homeless, visiting those in prison, and comforting the sick and bereaved.
Hijacked
The bronze figure of Rotterdam’s most famous son stood waiting for us as we stepped outside into the square. Erasmus stands as symbol for much of Europe’s Christian heritage that has been hijacked by Enlightment thought. Claimed by humanists as representing ‘undogmatic thinking’, Erasmus was a devout believer whose greatest passion was ‘to preach Christ from the original sources’. Refusing to take sides during the Reformation, he was too Catholic for the Protestants and too Protestant for the Catholics. The city’s only link with the scholar was as his birthplace. An illegitimate child, he left with his mother when only four years old, never to return. Yet his name lives on today in the city’s hospital, university and in the graceful bridge spanning the Maas.
A brief pause by the Zadkine statue allowed us to reflect on Europe’s acute post-trauma stress disorder after the war, and the vision of Schuman and others to rebuild on Christian foundations of forgiveness, reconciliation, solidarity, equality and peace. A few minutes later at the Scots International Church, one of numerous churches originally catering for ‘foreign Europeans’ brought by shipping into the bustling port, Madelon Grant of SKIN-Rotterdam (Samen Kerken In Nederland) told us of her work advocating the interests of international or migrant churches in the Rotterdam region. Europe’s biggest harbour has attracted workers from many ethnic and religious backgounds, and has the highest percentage of ‘new Dutch’ in the Netherlands, including Muslim and Christian migrants. Active in  networking and bridging various interests in a win-win situation for society, Madelon has won the support of the city council whose subsidies help cover her salary.
Empowerment
Local government policy in recent years has shifted to include faith-based social initiatives wherever they are saving the city money. For according to a university-conducted survey, faith-based social programmes save the city up to €130 million per year, running food-banks, counselling services, homework assistance, languages courses, empowerment and social integration, anti-human trafficking, and much more. Fully half of this effort is provided by the migrant population.
Crossing the Erasmus bridge to the Koningskerk on the south bank, we had this picture confirmed by church leader Joris van der Spek who described a well-networked, multi-faceted community of believers active in the immediate neighbourhood, a church not of ‘members’ but ‘disciples’, seeking the welfare of the city.
Finally at the Italian restaurant Trattoria Borgo d’Aneto on Nassauhaven, our visit was rounded off by Gusta Bouwman of 2Bfree, telling of her work among trafficked girls, and restauranteur Faouzi Chihabi, sharing his vision of empowering young migrants to find their place in society through training them as cooks.
This, one of our group summarised, was surely the church of the future!
Till next week,

In many European schools and universities these days, believers in God are dismissed as mental…