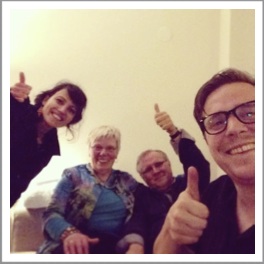 The news is not so reassuring this week. Russian troops along the Ukrainian border threaten invasion. Extreme rightists in France make great gains in municipal elections. And the latest UN report predicts the impact of global warming to be ‘severe, pervasive and irreversible’.

Time to pull in our heads and pretend all this is not our business; it’s too far from our daily lives; somehow it’ll all blow over?
True, for most of us it is far from the mundane challenges we face each day to make ends meet and to fulfil our immediate responsibilities to family, colleagues and friends.
But as the UN report reminds us, none of us is an island. We are all interconnected and more so than ever before in history.
Also true is that the vast majority of us have little influence on world affairs, beyond voting in elections. So we look for meaning and security closer to home: in our family, among our friends, our football club, our tribe, our community…
Which can become the breeding ground for nationalism–when we begin to think in terms of ‘them’ and ‘us’, finding scapegoats to blame for things going wrong. Perhaps we could call that kind of limited world a ‘selfie-culture’.
Even at international political levels, a ‘selfie-culture’ can be very prevalent. One analyst of last week’s nuclear top in The Hague detected an attitude among delegates of seeking to better one’s own position, rather than genuinely trying together to solve a common problem: ‘internationalism without empathy’. What was missing is what Schuman called the ‘spirit of Europe’, choosing to seek the welfare of the whole.
Scarey
‘Selfie’, by the way, was the Oxford English Dictionary‘s ‘word of the year’ last year. The first use of the word can be traced to this Australian internet forum entry in 2002: ‘Um, drunk at a mates 21st, I tripped ofer [sic] and landed lip first (with front teeth coming a very close second) on a set of steps. I had a hole about 1cm long right through my bottom lip.  And sorry about the focus, it was a selfie.’
Selfies can of course be fun. Such as this one where my wife and I celebrate our son’s 30th birthday with his recent bride. But over the long run, a ‘selfie-culture’ will spoil the fun, leading to social disintegration and the loss of the big picture.
As Jesus followers, we are part of a movement that is both local and global at the same time: ‘glocal’, some call it. We’re actually God’s plan, believe it or not, to transform our world, to see the authority of Jesus extended into every sphere of life, to see His Kingdom come. It’s perhaps scarey to realise he has no other plan. We’re it, folks!
Within this ‘glocal’ movement, many will be focused locally. But at least some need to look to the big or ‘global’ picture, like the men of Issacher, who ‘understood the times and knew what Israel should do’ (I Chron 12:32). Unfortunately, because the one, holy, apostolic, catholic church has suffered ruptures over time resulting in many territorial churches, which themselves–for good reasons–have splintered into myriad denominations and local churches, most leadership today is focused on the local.
Lord?
So where can we receive input on big picture issues, such as understanding Europe today,? It’s easy to say, ‘Jesus is Lord‘–but of what is he lord? Is he lord of history? of the future? of the nations? of governments? of economics?
Is he concerned about the Ukraine right now? about Lampedusa? about the 70% of Greek youth unemployed? about care for his creation,  planet Earth?
If not, then is he truly lord of all? If so, then should not we share his concern? After all, we are his plan, remember? If we can’t do anything else, we can at least pray.
The State of Europe Forum in Athens, May 8 & 9, is one of the few places I know where Christians can meet from various disciplines to look at these urgent big picture issues facing us in Europe. This will be the chance to meet Greek church leaders, Orthodox, Evangelical and Pentecostal; to hear stories of crisis being turned into opportunity; and to build friendships with other Europeans from various disciplines also seeking the big picture.
The Masterclass in European Studies, (July 27- Aug 2) in Geneva is another opportunity to understand from whence Europe derived her identity and moral values, and to seek ways forward.
The two Heritage Tours, one in Ireland and Britain, the other on the continent, will be truly fun, horizon-expanding experiences.
So why not sign up to get the big picture? And maybe get some selfies too–in Athens, Geneva, Dublin or Prague!
Till next week,
Jeff Fountain

Some of the dangers in NGO’s work

Was the real Santa Claus black?!