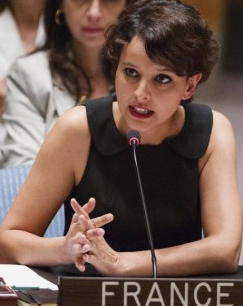 A sea-change is taking place in the way Europeans view prostitution. In an almost too-good-to-be-true-report, the European Parliament announced it will vote later this month on criminalising clients rather than the sex workers.

Perhaps even more surprising is the news that the French parliament, led by Women’s Rights Minister Najat Vallaud-Belkacem (see photo) already voted to fine clients paying for sex €1, 500 for a first offence, with a doubled fine for a second offence.
The bill aimed to prevent foreign pimping networks and to help prostitutes who wanted to leave the sex trade. Politicians voted 268 in favour and 138 against the bill. The parliamentary decision needs to be ratified by the senate before coming into force.
Following the French lead, the European Parliament’s Women’s Rights and Gender Equality Committee has voted through a report that recommends the adoption of the ‘Swedish Model’ of prostitution laws.
First introduced in Sweden in 1999, then adopted in Norway and Iceland a decade later, the law criminalises pimping, brothel keeping and buying sex, decriminalises people in prostitution and provides exiting services and support.
In Scandinavia, where countries generally rate highly for gender equality and acknowledge exploitation within the sex industry, the shift has been supported by prostitution and sex trafficking survivors.
Exploitative realities
Mary Honeyball, Labour MEP for London, tabled the proposal recommending the EU to take on the Swedish model of prostitution laws, which reasons that if there was no demand there would be no supply. The committee voted 14-2, with six abstentions.
‘This is a fantastic outcome,’ Honeyball responded after the vote. ‘It will form a key part of the sea-change taking place in the way we view prostitution across Europe,’ she added. ‘We are now a step closer to an approach which recognises the fundamental injustice that takes place when a man buys a women’s body.’
Pointing out that the majority of prostituted women in the UK were foreign, overwhelmingly from poorer countries and in many cases trafficked, she urged lawmakers not to continue to pretend that buying sex was simply something between consenting equals, but to look at the coercive and often exploitative realities of the global sex trade.
Ireland also appears to be on track towards the Swedish model, with cross-party support for criminalising paying for sex following a review of prostitution laws by the Department of Justice. The department report referred to evidence on the reduction of demand for prostitution in Sweden since buying sex was banned in 1999. Ireland’s review follows the anti-prostitution campaign of an influential coalition of non-governmental organisations called Turn off the Red Light.
Re-thinking
Countries that led the way in legalising the ancient trade, like the Netherlands and Germany, are beginning to realising the failure of their approach to gain more control over organised crime. A large proportion of Amsterdam’s windows in the infamous Red Light District have been closed in recent years by the city council.
Honeyball hopes the European Parliament will be able to ‘lead from the front‘ to broaden the shift towards the Swedish model. With France and Ireland switching the focus onto the men who purchase sex, and Germany re-thinking its laissez-faire system, the wind was clearly blowing in a fresh direction, she said.
Now she was particularly keen to see the UK Government come down off the fence and take a clear stance on the issue.
Brenda Wynne, of Equality Now, points also to Finland, as yet another nation moving towards the example of its nordic neighbours. This positive wave was likely to strengthen further as neighbouring countries realised that attempts to regulate the commercial sex industry through legalisation or decriminalisation only concealed and legitimised the exploitation and violence which those who bought sex inflicted, she argued.
While here in New Zealand, Romkje and I have spent time with Denise Ritchie, an attractive, courageous, outspoken campaigner and founder of Stop Demand who has for years been urging governments to adopt the Swedish Model. Denise refutes the suggestion that this is a prudish approach. Sweden and Iceland are known to be socially progressive and support laws encouraging greater gender equality. Iceland has gone even further, she adds, banning all strip clubs and businesses exploiting the nudity of employees.
Denise lived with us many years ago in Holland. It was greatly encouraging to see the influence one person can have! Check out her very informative website.
Till next week,
Jeff Fountain

A MILLENNIUM CREED We believe in the future! We believe the best is yet to…