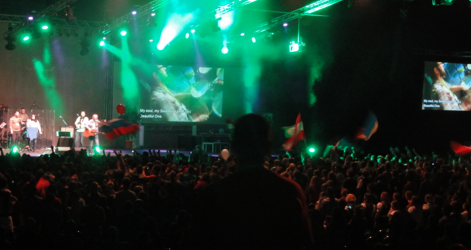 I shared the start of the New Year with almost three thousand young Europeans in exuberant dance and worship, wildly waving the flags of some of the 40 nations represented at the Mission-Net congress in Offenburg, Germany.
For those from Kosovo, Montenegro, Albania and Bosnia especially, this was an unforgetable and unique experience of international solidarity and fraternity, of unity with diversity, as Andy Flanagan and his band led us into the wee hours of the new-born year.
The inimitable George Verwer, with trademark world-map jacket and giant blow-up globe, had earlier shared stories from his own life and ministry of pioneering youth missions. Ian Nicholson of the 24/7 Prayer Movement had led in prayer focused especially on Europe.
My task had been to stir faith, hope and vision for our continent as we prepared to pray in the face of so much negativity, fear, unbelief and fatalism even among believers. Talk about empty churches, a secularised society and about Eurabia is not the full story–not even half the story.
For God is not finished with Europe. And when we learn to see Europe through God’s eyes, we receive faith to pray for Europe.
Four apps
So, I asked my young audience to allow me to download four apps into their brains, offering faith-building perspectives on Europe.
The first was the ‘God’s will’ app: what is God’s will for Europe? My simple brain tells me that it is always God’s will for God’s will to be done. That means he wants to see his kingdom come on earth, in Europe, in our country, city, neighbourhood, street and family.
The second is the ‘death & resurrection’ app: that  Christianity is all about death and resurrection–of Jesus Christ in the first place, the turning point of history. But we see a pattern of death and resurrection, apostacy and renewal, all through church history. So when things are not looking good, we can have hope that the Spirit of God will do something new, somewhere, sometime, somehow.
The third is the ‘faithful minorities’ app: despite the black chapters of church history, there has been a consistent chain reaction involving those who followed Jesus faithfully, profound impacting Europe’s story–and still can!
Lastly, there is the ‘wheat & tares’ app: Jesus said both would grow up together (Matt. 13). When we look at last century, for example, we see the worst century in history: two world wars, the atom bomb, names like Lenin, Hitler, Stalin, Mao Tse-tung, and so on. Surely the century of Satan! But it was also the best century in history, starting with revival in Wales, Azusa Street and the global pentecostal movement; and awakenings in Africa, Indonesia, South Korea, China and Brazil, for example. More people became believers last century than in all the previous nineteen put together! Surely it was the century of the Spirit! Surely we are living in the most exciting phase of church history ever!
Seven signs
These apps help us to see the following signs of hopes in Europe today:
1. New prayer initiatives: over the past few years, March for Jesus, Global Day of Prayer, 24/7, 30 Days of Prayer during Ramadan, and many more such initiatives have sprung up. Is God just teasing us or does he have plans?
2. The shakings of God: he has been shaking the Marxist world, the Muslim world and now the world of Mammon. Everything not based on God’s kingdom will be shaken.
3. New spiritual hunger: despite (or because of) secularism, spiritual hunger is rising. Pop idols and film stars are into do-it-yourself spirituality with no ethical demands. Here is a ripe harvest field for incarnational mission.
4. New expressions of church: as people seek relevant expressions in a multi-cultural society, new forms of church are emerging outside of traditional church walls.
5. The New Europeans: look who God is bringing to Europe –from Asia, Africa and Latin America! Almost half of all EU migrants are already church members. Migrant churches contribute to urban church renewal bringing lost gifts of spiritual discernment, colourful worship and bold procamation.
6. Unity of heart: never before has there been as much convergence as today between old rival church traditions– Pentecostal, Protestant, Catholic and Orthodox. Spiritual renewal movements have swept over denominational barriers. What we have in common is greater than our differences.
7. Recovery of the gospel of the Kingdom: the awareness that the Gospel is not just good news about salvation, but about Christ’s lordship over all spheres of life is leading to expressions of mission involving the transformation of individuals, families and communities.
May these apps and signs give us faith, hope and vision for Europe in 2014!
Till next week,
Jeff Fountain

Europe needs three-dimensional people: rooted in the past, anticipating the future, yet living in the…

An Alternative Vision for Europe

Great things are done when men and mountains meet; this is not done by jostling…

Today, Sunday June 15, is World Refugee Sunday. Or, if you prefer, next Sunday, June…

No, the game is not over–yet! There is still hope for Europe, participants at the…

Last fall, I was sending each week a summary of chapters of a book I…