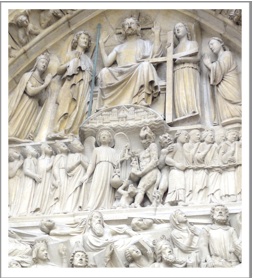 For the thousands of tourists who gather daily in front of Notre Dame Cathedral in Paris, one of Christianity’s unique gifts to humankind–compassion for the poor–can be seen in graphic detail.
The Portal of the Last Judgement is the west facade’s central portal, proclaiming the Christian doctrines of Christ’s saving work on earth, the resurrection of the dead, and the separation of the ‘sheep’ and ‘goats’ according to the lives led on earth and the love shown to God and fellow humans.
Kermit Horn, who for years has been leading philosophical tours of the Left Bank (www.parishistorywalk.com) explained to my wife and me last week how profoundly influential the Christian concept of love for one’s fellow humans, especially the poor and the vulnerable, has been for our society.
With his back to the cathedral facade, he pointed to a huge building complex on his right engulfing a whole block of the Isle de Cité. Hôtel-Dieu, he explained, was the city’s first hospital, dating back to the seventh century. It was a direct response to Christ’s teaching in Matthew chapter 25 to care for the suffering, deprived and the sick.
For at the Nicaean Council called by Emperor Constantine in AD325, the gathered bishops agreed that every cathedral city should have a hospital. Medical practice of course existed long before those days, Kermit pointed out, but never had the poor had access to such care. Only in recent times has the state taken over so much of the healthcare carried out through European history by Christians.
Charity
Pointing to the centre of the Isle, Kermit went on to say that Julian the Apostate, proclaimed Roman Emperor in Paris in 360, had had his palace there. Julian had tried to stop the spread of Christianity in the empire. He had complained that Christian works of charity wooed impressionable converts: ‘Whilst the pagan priests neglect the poor, the hated Galileans devote themselves to works of charity, and by a display of false compassion have established and given effect to their pernicious errors. See their love-feasts, and their tables spread for the indigent. Such practice is common among them, and causes a contempt for our gods.’
Our walk through the Left Bank was to last another three hours as we traced the impact of the Christian story from the martyrdom in AD250 of the first bishop of Paris, St Denis, through the early Middle Ages from St Genevieve and the conversion of King Clovis, Charlemagne, the Viking attacks, to the rise of the University of Paris, and eventually of key figures in the Reformation and Counter-Reformation era: Erasmus, Lefèvre, Farel, Calvin, Loyola and Grotius. It is a story of how the ‘soft powers’ of Christianity–truth and love–so shaped the European mind, and of how often the not-so-soft means of the Crusades, the Inquisition and authoritarianism in the church compromised that truth.
Radiant
Walking up to the Pantheon, resting place of the nation’s great, we then descended back towards the Seine through streets once trodden by such Enlightenment philosophers as Hobbes, Voltaire and Rousseau, and the American activists Paine, Jefferson and Franklin. This was the Paris of Marx, Engels and Lenin, of Cézanne, Van Gogh and Picasso, of Hemingway, Joyce, and Steinbeck, of Sartre and Camus, of Lyotard and Foucault… on the list goes! Three hours was far too short to capture two millennia.
And yet it was the image of the cathedral portal that remained as we made our way to the Sacre Coeur basilica crowning Montmartre’s skyline to meet with leaders from some 50 movements and communities across Europe in the annual gathering of Together for Europe [www.together4europe.org/en/]. Our theme this year was ‘solidarity with the poor’ as we considered how to respond to Europe’s current crises. Despite all the glories of man represented by the Eiffel Tower, the Louvre Museum, the Defense Arch, the Galeries Lafayette shopping cathedrals and the Stade de France sports sanctuary, this 800-year-old sculpture on the Last Judgement witnessed silently to ultimate realities.
Jean Vanier, founder of the L’Arche network of communities of disabled, volunteers and staff, reminded us that the Kingdom of God held radically different priorities. His face radiant with love, Vanier talked of entering the Kingdom of God as we learn to become like Jesus, the Word made flesh, living close to the poor.
Jesus says ‘yes’ to the poor, agreed Cesare Zucconi of the Sant’Egidio evangelistic movement working among the poor in many European cities, including Paris. In the EU today, 27% ran the risk of poverty, he said. We had a new class of the new poor. They posed a new question for us: would we be their friends?
For Matthew 25 tell us that much hangs on our answer.

Last fall, I was sending each week a summary of chapters of a book I…