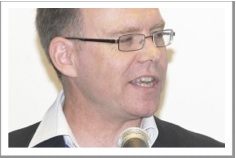 The time seemed ripe last week to confront some Evangelical sacred cows. At an annual gathering of Evangelical leaders from across Europe, held in Holland, I was asked to share thoughts on ‘a faith-based response to Europe’s crises’.
Jim Memory of Redcliffe College, who had spoken at the State of Europe Forum in Dublin last May on crises facing Europe today, had just presented a similar survey of the challenges and opportunities before us in economics, politics, society, the environment and religion. (see photo)
So what would a faith-based response to these challenges look like? This question immediately confronted us with the first of our sacred cows.
Faith & Works
For as Protestants, we evangelicals see ourselves as firmly in the ‘faith’ camp; sola fide and all that; ‘By faith alone…’. Yet, we are renowned for our activism and not for our contemplation (for which the ‘works’ guys paradoxically are known).
After Jim’s sobering warning that economic, political and social instability will continue and even worsen, he encouraged us to recognise the boundless opportunities looming for the church to respond with care and compassion. Evangelicals know how to do this: with food banks, soup kitchens, debt counselling, second-hand clothing stores, and much more.
My question however was, will we respond with faith, or in activism, out of duty, or even in desperation? Will our actions be faith-based? Faith, that is in God’s providence in history and even in today’s crises?
Providence in History
Here again, an unspoken belief for many evangelicals is that God was on vacation from the time of Paul until Luther (for some of us, even later); ‘the Dark Ages are not worth knowing about’. Yet to understand something of God’s hand in history, and to have faith for his future purposes, we need to understand how God the Holy Spirit has always been active in history, working through faithful minorities.
Evangelicals & the Whole Body of Christ
Once more, we are confronted with a deeply-imbedded attitude: that we evangelicals are the true believers, the ones who really understand the Bible. But if we’re truly honest, we have to admit that we’ve been wrong about a lot of things; and those we considered liberal and apostate have sometimes been right.
Social Action & Evangelism
Take for example the so-called ‘social gospel’, which every evangelical knew was a ‘diabolical distraction’ from the real gospel of salvation. Only as late as 1974, at the Lausanne Congress, did our two heavyweights, Billy Graham and John Stott, declare the two-handed gospel to be biblical. We were wrong and a lot of our liberal friends were right.
After all, wasn’t it Jesus himself who talked about feeding the hungry, clothing the naked, visiting the sick and the prisoners..? While we claim Wilberforce as ‘one of ours’, for over a century things were very quiet in the evangelical corner concerning public engagement.
Public Square & Private Faith
When it comes to thinking biblically about society, politics and economics, we are johnny-come-latelys. Catholics and neo-Calvinists (Kuyperians) have focussed much over the past century on responding to the challenges of the industrial society and modern times. Meanwhile we are still finding out what the questions are. Are we thinking biblically concerning the current crises? Are we asking ourselves how today’s needs and tomorrow’s challenges should shape our mission? Or are we basically focussed on the welfare of our own local church?
Local & Beyond
For by and large, we train our evangelical leadership to think local, at the expense of the big picture: Christian leadership means pastoring a local church. That’s what our institutions mainly train leaders for, with a few exceptions. Where are the training programmes equipping potential leaders for engagement in politics, economics and all other spheres of life?
Church & Kingdom
It comes as a rude shock the first time we realise that Jesus hardly said anything about the church during his ministry. We can only find two verses in all the gospels where he mentioned the word ‘church’: Matthew 16:18; 18:17! Of course, he loves the church; she is his bride. But it was the Kingdom of God that was central to his ministry, as we read in over 100 gospel verses. And God’s Kingdom is where his will is being done, He wants his will to be done on earth, in Europe, in every lifesphere.
National & Europe
But Europe has hardly been on the radar for evangelicals, unlike Catholics who have embedded biblical concepts into EU thinking, despite widespread humanist influence. But where is our vision for Europe? Without a vision the people perish. Is this why so many churches are perishing?

How then was all this received? Well, as you can see, I lived to write another weekly word.

Till next week then,

Expectant throngs were beginning to fill the streets of Edinburgh last week. The world's largest…

I was leafing through a book on 'chaos theory' in a library once, and discovered…