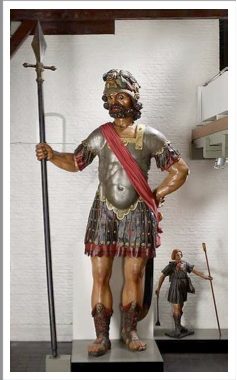 In Amsterdam’s Historical Museum, a larger-than-life statue of Goliath standing about 6 metres tall dwarfs both onlookers and the dimunitive figure of David holding his sling.
The 360-year-old wooden giant was created for a fun-park in Amsterdam during Holland’s Golden Age.
Yet the Goliath of the biblical record in 1 Samuel 17 stood ‘merely’ half that height, three metres high, still pretty impressive and pretty unbelievable for the modern mind. That and the story of the shepherd boy who dared challenge this Philistine champion sodier with nothing but a sling and stones, and who later went on to become King of Israel, can be easily dismissed by moderns as exaggerated fable.
However, best-selling author Malcolm Gladwell retells this familiar story with a fresh credibility in his latest book, David and Goliath: Underdogs, Misfits and the Art of Battling Giants. We have come to expect Gladwell to unpack some simple concept or idea as if he was explaining the obvious, yet in a way that transforms our perspectives. The Tipping Point (2000) opened our eyes to recognise how trends can change everything. Blink (2005) revealed our intuitive thinking habits. Outliers (2008) made us rethink about success.
Now in David and Goliath, Gladwell draws fresh lessons from the famous encounter that has come to stand for any improbable victory in sport, politics, war or life in general.
Wrong
Financial Times reviewer Lucy Kellaway describes David and Goliath as: ‘an ill-assorted collection of anecdotes that demonstrates various things we already know. It tells us that having nothing to lose can make you bolder. That if you deploy power indiscriminately, it may backfire.
‘Yet David and Goliath is Gladwell’s most enjoyable book so far,’ she continues. ’It is a feel-good extravaganza, nourishing both heart and mind. Each of its stories–set in Northern Ireland, Alabama, California, Vichy France and ancient Palestine –has an ending that is both happy and surprising. Gladwell is a master at marching us off in one direction, only to end up taking us somewhere else instead–somewhere better.’
You can get a preview of the book from Gladwell’s TED-talk, ‘The unheard story of David and Goliath’. The author tells how the story upset him as he was writing his new book, because everything he thought he knew about the story turned out to be wrong. And he turns up some interesting research to flesh out his retelling.
In the biblical account, Goliath is outfitted with all the necessary trappings of warfare: armour, shield, javelin and sword. All David has is his shepherd’s sling. Aahh, and that’s where we misunderstand the story, Gladwell says.
In ancient warfare you had cavalry, infantry and artillery.  Artillery meant archers and slingers. These slingers could be incredibly devastating, he explains, sending their projectile at 35 metres per sec, faster than the fastest baseball pitch. Rocks in that particular Palestinian valley are known to have high density. Researchers have estimated the stopping power of the rock fired from David’s sling to be equal to that of a modern automatic handgun. Experienced slingers could kill at 200 metres and could hit birds in midflight.
Underdog?
So, concludes Gladwell, David had every intention and capability of hitting Goliath in his most vulnerable point, right between the eyes. Goliath was expecting hand-to-hand heavy infantry combat.: ‘come to me…’ he challenged his opponent. But he was caught totally offguard. So was David really the underdog?
We also misunderstand Goliath, Gladwell suggests. Was he really the invincible opponent the onlooking Israelite soldiers feared? The text offers hints that Goliath was actually severly impaired in movement and in vision. Why did he have to be led onto the valley floor by his attendant? Why did he seem to be slow in responding to David? Why did he see more than one stick in David’s hands?
Gladwell reveals that there has been much medical discussion on Goliath’s condition, and that giantism is usually caused by acromegaly, affecting the pituitary gland regulating growth and distorting sight. Cases are recorded of people with this condition who have grown to Goliath’s height.
So, Gladwell concludes, there is a lesson for us all: giants are not as strong and powerful as they may seem, and sometimes the shepherd boy has a sling in his pocket.

History is replete with lessons of how God has used faithful minorities to fell intimidating giants, from Goliath to communism. Could secularism be next?

Lord Jonathan Sacks, Chief Rabbi of the British Commonwealth and a leading moral spokesman in…

Recent developments in Europe are nothing short of stunning! Never before in history have so…