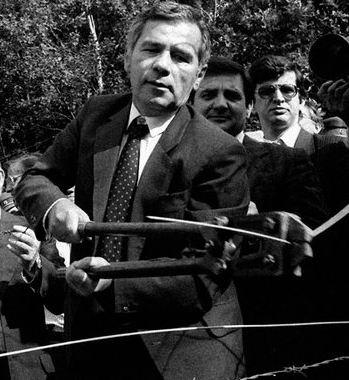 Did you catch the story last week about the man who cut through the iron curtain between Hungary and Austria? Gyula Horn, former Hungarian prime minister, died last wednesday, aged 80.
Twenty-four years ago this week, on June 27, 1989, Horn, then foreign minister, and his Austrian counterpart staged a photo-opportunity to create what Horn called ‘an irreversible situation’.
In fact, two months earlier the electrified barbed-wire fence had already begun to be removed as it badly needed repair. Birds sitting on the rusty and decrepit fence often set off false alarms. The cost of replacement, and the fact that new materials would have had to be imported from the West led to a decision to dismantle the fence, replacing it simply with a green border strip guarded by patrols.
Horn saw an opportunity to find out how the Kremlin would respond to such a symbolic act. Despite this violation of the physical boundary demarking the communist and non-communist worlds, the tens of thousands of Soviet troops stationed in Hungary remained quietly in their garrisons.
Once a hard-line Communist himself, Horn had served in militia units ferretting out rebels during the Hungarian Uprising of 1956. His brother, a fellow-Communist, had been lynched by the rebels.
But three decades later, Horn had cast off ideology to become a pragmatic reformer, nudging Hungary towards the West.
Picnic
A few weeks before the dramatic photo-shoot with Horn, opposition party members had met secretly with Otto von Hapsburg of the European Parliament over a dinner in Debreçen, eastern Hungary. They discussed plans to hold a picnic on the border to celebrate a future Europe ‘without borders’.
Horn’s one small snip had accelerated the process the picnic planners had hoped to catalyse. The picnic now became an opportunity to celebrate the demolishing of the curtain and to demand an open border and free travel.
On August 19, 1989, over 10,000 people responded to clandestine invitations scattered across the country to attend the picnic on the border close to Sopron.
I have written about this is previous ‘ww’s after visiting the picnic location, and having seen photos of the thousands–both Hungarians and vacationing East Germans–streaming towards this border crossing. They began to help pull down the barbed wire, some stuffing it in the trunks of their Trabants to take home as souvenirs. “Baue ab und nimm mit!” (Break it down and take it with you) became the slogan of the picnic. A symbolic opening of the border was planned, with a brief walk on the other side of the border by a delegation.
A press conference seemed to delay proceedings too long for many of the East Germans, who had begun to gather in the thousands in Hungary where without visas they could often share holidays at Lake Balaton with their West German relatives. As the press conference dragged on, several hundred East Germans began to surge against the wooden border gate, suddenly breaking through and running towards Austria.
Ecstasy
The Hungarian guards were still under orders to shoot anyone attempting an illegal border crossing. Young people with only the summer clothes on their backs and clutching hand-baggage, couples with young children, began to run with the crowd, tears streaming down their cheeks. Some leapt in ecstasy as they passed through the barbed-wire covered gate. Others stopped to kiss the Austrian soil. The moment of their dreams had unexpectedly become reality.
The guards held their fire. One even stooped to pick up a small child dropped in the rush, and handed him back to his mother. Six hundred or so passed through before the guards managed to get the gate closed again.
A steady stream of some 200 East Germans successfully crossed the ‘green border’ nightly in the weeks following the picnic. About the 60,000 refused to go back from Hungary to East Germany, choosing instead to endure the deprivations of refugee camps in the hope that Hungary would soon open her borders.
Finally on September 11, 1989, the Hungarian government fulfilled that wish, and the borders were opened. In East Germany mass demonstrations, encouraged by events in Hungary, demanded freedom from Erich Honecker’s government. Honecker bravely declared that the Berlin Wall would last another hundred years.
It didn’t last another hundred days. On November 10, demonstrations involving several million finally pulled the Wall down.
Next week as we travel back and forth across the former Iron Curtain with the Continental Heritage Tour, we will recall the bravery of those minorities who helped shape history by standing against tyranny.
Till next week,
Jeff Fountain

Winston Churchill put it this way: The farther backward you can look, the farther forward…