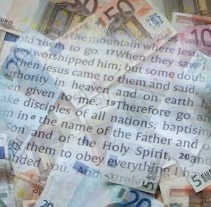 Most Europeans have no clue, and couldn’t care less, that this Thursday, May 9, is so-called ‘Europe day’. And certainly under current circumstances, there’s not much to celebrate, Right?
May I suggest, however, that there is an intrinsic relationship between Europe Day and Ascension Day, which happen to fall on the same day this year. And that we as Christians particularly have every reason to be thankful to God and to celebrate this Thursday.
Ascension Day, paradoxically still celebrated as a holiday in some of Europe’s secularised nations such as Holland, originates of course from the church calendar in recognition of the ascension of Jesus to heaven 40 days after his resurrection.
According to the gospels, Jesus gave his disciples instructions to ‘go into all the word and disciple the nations’, or words to that effect. It was his purpose that through the Christian movement, the peoples of the world would be taught how to live out God’s will on earth, how to see his kingdom come in greater measure, how to live in right relationship with God and with each other.
So Ascension Day is a good day to evaluate how well we have been doing the job, a good day to ask about the spiritual state of Europe.
Shalom
Since Ascension Day and Europe Day fall together this year, how can we not then pause to reflect on these questions?
For Europe Day–as you may have often read in these weekly words–marks the birth of what has become the EU. For on May 9 1950, Robert Schuman first put forward a plan which catalysed the European movement that has led to today’s EU.
And, friends, the future of the European nations and how they relate together is far too important a question to leave just to the politicians.
If God’s purpose for humans is shalom, ‘right-relatedness’ for individuals, families and communities, that is also true for nations. How should the European community of peoples relate to each other? And what should we as Christians have to say about such international relations?
The commission Jesus gave his disciples, and therefore to us, was to disciple the peoples in the ways of love and truth.
If we believe that Jesus is Lord at all, then he must be Lord of all–all areas of life, including politics, economics, society, environment, health and family, as well as the church.
So what does shalom have to do with each other these areas?
Let’s take economics for example. According to Michael Schluter, founder of Relationships Global and a speaker at the State of Europe Forum* in Dublin this week, Christianity is a ‘relational’ religion often sets at odds with market capitalism as conceptualised by economists and practised by business people. For economics and business aim to satisfy the wants of individuals without giving priority to individuals’ human relationships.
While life can be viewed from many perspectives– financial, environmental, individual and material–we need to see all of reality through a relational lens if we are to look at the world as God sees it, says Michael.
For all of life is ultimately about relationships. Every financial transaction is an expression of an underlying relationship between nations, organisations or individuals, he argues.
Snapshot
The development of a society can be measured not in terms of economic growth but by the quality of relationships between individuals and between ethnic and other social groupings.
Michael’s colleague Jonathan Tame will be presenting a ‘relational snapshot’ of the state of Europe in Dublin.
In the final public session of the forum, Michael will be teaming up with young Czech economist Tomas Sedlacek, who believes that the core of the problem today is the focus on growth, based on the idea of borrowing more money. Instead, we have to find a stable economic model where growth does not depend on more debt.
In his bestseller The Economics of Good and Evil, Tomas argues that the field of ethics was disconnected from economics, leaving only mathematical formulas. Yet, he argues, the bottom-line of economics is the struggle between good and evil. For an economy to be well functioning, it needs the compass of ethics.
So there will be much to write about in coming weeks from the Dublin forum. We hope it stimulates debate and discussion on how we can carry out the last instructions of Jesus to disciple the nations–in our case, the nations of Europe.
Till next week,
Jeff Fountain
*see www.stateofeuropeforum.eu

Kabbalah and the superstars

I'D HAVE NEVER CHOSEN THE BOOK FROM THE CATALOGUE MYSELF. It was one of those…

A chalice for all

Sometimes we need to be shocked out of our comfort zone. Jesus could see that…