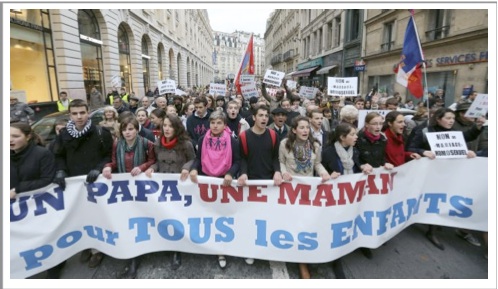 As Valentine’s Day approaches, and National Marriage Week begins in several European nations, storms swirl around marriage and divorce issues across the continent.
Britain’s MP’s voted this week in favour of the Same Sex Couples Bill by 400 to 175. Despite almost half his MPs voting against gay marriage, Prime Minister David Cameron declared he was proud that love between a same-sex couple will now “count the same” as a heterosexual couple. Depending who’s counting, of course.
Across the channel in Paris, a crowd estimated up to 1.2 million strong protested last month against same-sex marriage legislation of President Hollande.
Protesters say they are not homophobic, but that they are against the legalization of gay adoption as this amounts to the breakdown of the traditional family. Children, they say, have a fundamental right to have a father and a mother. The opposition says such a radical change in society should not be rushed through in this way.
Supporters of the legislation argue that marriage should be a simple contract between two individuals and should be made available to any couple wanting to make this contract to each other.
A leading British evangelical has recently caused major waves by embracing the view that the essence of marriage is faithfulness, not the hetero-sexual relationship.
Bigotry
Countless discussions among families, friends and colleagues have been catalysed by such developments. Knee-jerk reactions or cowed silence are common responses. Christians wanting to remain true to their understanding of scriptural teaching about marriage as being exclusively between a man and a woman find themselves increasingly on the defensive. Even polite disagreement and opposition to the endorsement of same-sex marriage is considered bigotry and intolerance.
And this is one of the most disturbing aspects. Freedom of speech and expression on this issue is being trumped by gender rights. Voltaire, the French Enlightenment philosopher who championed tolerance against bigotry and tyranny, is commonly quoted as saying: ‘I disapprove of what you say, but I will defend to the death your right to say it.’ Scholars now tell us these were probably not his words but those of his biographer summarising his attitude. However, today ‘tolerance’ demands agreement, not agreement to disagree.
Something Voltaire did say was ‘…the safest course is to do nothing against one’s conscience’. But that is exactly what civil servants, nurses and doctors are being forced to do at the threat of losing their jobs. (He also said it was a dangerous thing to be right when the government was wrong.)
Differences
These issues force us all to read and think more deeply. One recent title, What is marriage?, acknowledges that homosexual relationships have many of the same contours that heterosexual relationships do, but emphasises that it’s the differences that matter. Sex between a man and a woman differs fundamentally to sex between members of the same sex. The authors, including Princeton law professor Robert P George, whom the New York Times calls ‘America’s most influential conservative Christian thinker’, show that heterosexual marriage is a rationally defensible corner-stone of Western civilisation and a bedrock of societal stability.
Taking studies from both left- and right-leaning think tanks they conclude that children raised in intact families headed by two biological parents fare best in areas of educational achievement, emotional health, familial and sexual development, and child and adult behaviour. They also conclude that lower-income earners are the hardest hit by a failing marriage culture.
Research in the Netherlands on the cost to the nation of divorce has just been released by National Marriage Week confirming such conclusions. The cost of broken marriages in Holland amounts annually to two billion euros. This includes the criminal behaviour of children from broken homes, government handouts to one-parent homes and lost income due to absenteeism resulting from divorce. Some 160,000 women and 100,000 children risk poverty resulting from divorce, the study reveals.
Who can foresee the consequences of the current momentum across the Western world to redefine the age-old institution of marriage?
Till next week,
Jeff Fountain

While visiting a sculpture park in New Zealand some time ago, my wife and I…

A Fresh Start in Italy

It was one of the best experiences of his life, one quiet Scandanavian exclaimed…

Thursday this week, October 9, marks the 25th anniversary of a remarkable event that took…

‘The greatest work ever’

As we approach Easter, one of the greatest musical works ever composed will be performed…