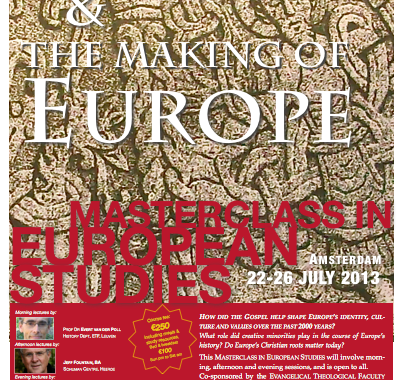 David Cameron’s speech last week threw a whopping big stone in the pond, sending ripples through all the European capitals. It triggered a fresh debate about Britain’s place in the EU, well as about the whole future of the EU.
So, whaddawethink?
Europe will now become a major discussion point for many Brits like never before. And since the proposed referendum will not take place until 2017, assuming Cameron’s re-election, the discussion is destined to last a long time.
The healthy thing about Cameron’s speech is that it has put the question on the table: are we headed in the right direction? We can debate a lot of other points, but this is a question Christians should be discussing too.
One thing founding father Robert Schuman would heartily disagree with, however, is Cameron’s vision of a Europe ‘with the free market right at the heart’. Of course, we expect that from a Tory.
But Schuman insisted that ‘the identity of a new Europe cannot and must not remain an economic and technical enterprise: it needs a soul’.
Thinking about Europe reveals a blind spot for us evangelicals–as well as for Christians from other streams too. Frankly, we often don’t know how to think about Europe, other than to suspect vaguely it has something to do with the Beast of Revelation.
Dangerous
So basically we don’t get involved thinking about such dangerous topics. Ironically, we prefer to leave it to non-believers to shape Europe’s future.
Actually, the blind spot about Europe is a much more pervasive problem. It is a profound problem in education in general, according to Christopher Dawson, who 60 years ago warned that we had become so accustomed to studying the parts, the nations, without reference to the whole, Europe, that we had forgotten the original basis of Europe’s unity.
Modern nationalism, he writes in Understanding Europe, has led every European people to insist on what distinguished it from the rest, instead of what united it with them. If we wish to understand our past and the inheritance of Western culture, we have to go behind the nineteenth-century development of liberal faith in progress, and study the old spiritual community of Western Christendom.
The existence of this spiritual community, he argues, is the ultimate basic reality which underlies all the separate activities of modern Western societies and which alone makes Western education possible. It was in the Christian faith that Europe found its original basis of unity.
So, neither at school or at church are we really equipped to think about the kind of Europe God might want, the kind of Europe that would more faithfully reflect his character; let alone how to move in that direction.
But surely that’s what we pray for when we pray, ‘May your kingdom come, may your will be done on earth–in Europe–as it is in heaven’!
MasterClass
So, whaddawethink? For many of us the answer is, wedunno.
To address this need, the Schuman Centre is organising the following four activities:
The State of Europe Forum, we wrote about last week, May 9&10, in Dublin. Cameron’s speech has certainly made this event very timely. Promises to be a great forum. Join us!
The MasterClass in European Studies This five-day class–22-26 July–on The Gospel and the making of Europe will be held in Amsterdam in partnership with the Evangelical Theological Faculty of Heverlee/Leuven. Dr Evert van de Poll and myself will present most of the lectures, with visiting lecturers, Evert-Jan Ouweneel, Dr Govert Buijs and Dr James Kennedy. Both Bologna and UofN credits will be offered. I’m very excited about this opportunity for an intense week of varied and high-level input helping us think about Europe.  Full accommodation is available for the first 20 applicants. Check out the details.
The Continental Heritage Tour, 29 June-14 July. Romkje and I never tire of this trip–we always learn new things about the creative minorities who shaped Europe by their faith, and it gives us new hope and courage for the future. Forty locations in two weeks! Half the places have already gone, so don’t delay if you’re considering it.
The Ireland/UK Heritage Tour, 10-20 August. New this summer, this tour is almost already full! It’s been fun preparing for this tour, starting in Dublin and tracing the Celtic-Anglo movement from Ireland to Scotland and England, ending in London.
So, whaddayathink?
Till next week,

#7 RECOVER! …the Gospel of the Kingdom

Here we go again into new year. And, as always, we wonder what it will…