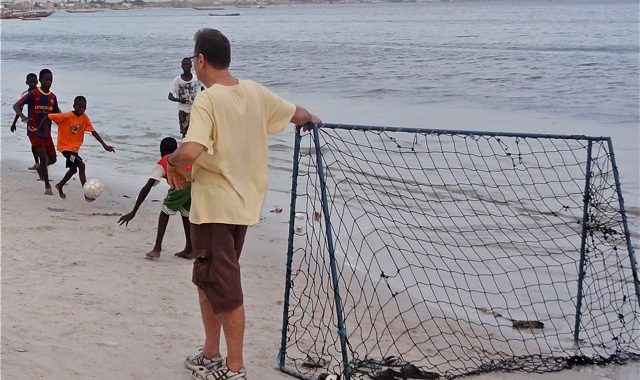 In my opinion, the best cure for grumbling about our present financial crisis is to spend a few days in the two-thirds world. After a week in Dakar, Senegal, I was confronted this weekend with the enormous inequality of wealth on our planet, walking past shop windows in central London.
For Christmas is almost here. ‘Tis the season to be tempted, tralalalala lalalalaaa… Window displays, magazines and unsolicited mail all conspire over this festive month to seduce us into avaritia (avarice or greed), luxuria (extravangance or lust), gula (gluttony) and invidia (envy), often with subtle appeals to superbia (hubris or pride).
Prospects of the crass commercial weeks ahead can tempt us to commit the sixth deadly sin of ira (anger)–although righteous anger has its place. For others, the season can be leave us spiritually weary, indifferent or despairing, all of which are perhaps truer translations for accidia than the usual ‘sloth’.
As a wonderful antidote to such allurements, my wife and I visited this past week with Garry and Anke Tissingh, veteran YWAMers in Africa. To follow them on their various daily commitments, overseeing a medical clinic where hundreds seek aid and dental treatment, running a daily children’s club offering loving acceptance, dignity, reading skills and lessons in simply saying ‘sorry’, visiting the sick and dying in their cramped single-room living space, or dropping in on the local chef du quartier or mayor, was to observe generosity, humility, encouragement and compassion working trans-formation in many lives.
When Madame Garry (as Anke is known) walked by two local women, one said to the other, ‘There’s the woman who loves our children.’
The respect and affection this couple have earned from the Muslim community where they live and work in a Dakar quartier reflect the gifts of time, attention and care they liberally distribute all year round.
Potential
The occasion of our visit was an international forum for the ‘Transformation of Africa’ hosted by the Tissinghs. Where is Africa today half a century after the independence of many of its nations? This was Garry’s leading question as he opened the forum. It remains a continent of overwhelming needs and challenges; and yet a continent of enormous potential and latent riches.
Half the world’s minerals lie buried beneath her surface. Yet 34 of the world’s 50 poorest nations are African. While aid pours in from the west, the equivalent amount of the toal aid given has been channelled into African bank accounts in the west.
We are told that the African church is the fasting growing church in the world, with 50,000 new believers joining weekly. Africa has over ten times more evangelicals than in Europe, with one and a half million churches.
So what’s wrong with the gospel that it is not effecting the transformation of Africa? Or of Europe for that matter? Could it be that we have shrunk the gospel of the Kingdom to a ‘mere’ gospel of salvation?
Diamonds
I was about to catch glimpses of how that gospel should look as I flew from Dakar to participate in a Blesstalks event in London, initiated by Gerard and Chrissy Kelly. A sort of Christian version of the famous TEDtalks, Blesstalks aim to encourage creative and entrepreneurial responses in our world of need. As one of Gerard’s poems was being read, I thought of how Garry and Anke saw the kids in their community and the continent they serve:
‘We believe in the grace
of the gifts God gives
His breath in everything that lives
Greater gifts to be discovered
Deep in you, disguised, dust-covered
You see coal – God sees diamonds.’
Diamonds and gold concern Greg Valerio deeply. Greg’s Blesstalk was something every Christmas shopper should hear. He is a ‘fair trade jeweller’ passionate about transforming lives amongst small-scale miners through the power of mine-to-market traceability and transparency (gregvalerio.com). Greg’s aim is ‘to make it culturally unacceptable to sell jewellery that is not independently certified as socially and environmentally responsible’. The production of an average gold wedding ring, Greg said, produced seven tonnes of toxic waste. African gold and diamond miners work under conditions of virtual slavery for a pittance to meet our western appetite for luxuries.
Another Blesstalker, Jenny Dawson, (rubiesintherubble.com) told how she left her world of hedge-funding to address today’s culture of excessive waste. She began a chutney-making venture using surplus from London’s food markets while creating work for the needy.
All of which offers abundant food for thought over the coming season.
Till next week.
Jeff Fountain

Nobody quite knows which saint gave his name to February 14, the day on which…