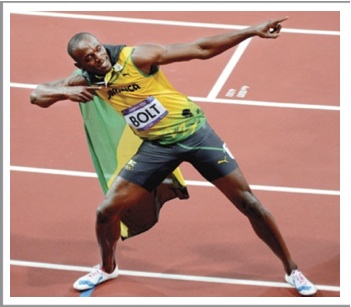 The world watched as the fastest man on the planet crossed himself, pointed to heaven, crouched into his start position and then sprinted the second-fastest 100-metre dash in history… on a Sunday.

Throughout the Games the sound track from Chariots of Fire has resounded through the various Olympic venues, a reminder of the story of Eric Liddell, the man who refused to run on a Sunday.
Other athletes kneel on the ground after crossing the line, mouthing thanks to God above. And at least some of the Muslim athletes continue to compete while observing the Ramadan fast.
So where is God in all of this competition? Does he give an extra push to those who seek his help to beat their fellow competitors? What does he really think about sport? Is it necessarily a false god competing for the hearts and souls of men and women?
After all, were not the Olympics inspired by pagan Greek culture? Was not the 2012 Olympic flame ignited from the sun by eleven women representing the Vestal Virgins, at the site of the ancient games, Olympia? And wasn’t the opening ceremony one great occult celebration, as speculated on the internet?
Or is God delighted to watch his children playing rather than fighting, and the nations assembling in a spirit of brotherhood and celebration, rather than in battle?
More than gold
In recent decades, Christians have come to see major sports gatherings as God-given opportunities for evangelism. One thousand young evangelists converged on Munich at YWAM’s first Olympic outreach in 1972. Many more thousands of believers, hundreds of churches, dozens of organisations and denominations have joined together to share their faith during these current Olympics under the More Than Gold banner (www.morethangold.org.uk), with the Catholic Church being a major partner .
Catholics probably have done more thinking about God and sports than most evangelicals. Several popes have written about sport, including Pius XII (1939-58), who was active in sport most of his adult life. Paul’s exhortation in 1 Corinthians 10 to ‘do all to the glory of God,’ applied to all physical activity, especially sport, he wrote.
John Paul II (1978-2005) was a keen skier and goal-keeper, and wrote about sport some 120 times, once exhorting athletes that ‘athletic activity can help every man and woman to recall that moment when God the Creator gave origin to the human person, the masterpiece of his creative work.’
Benedict XVI, known more for his intellectual prowess than sporting achievements, told participants at the Turin Winter Olympics in 2006 that ‘there is nothing human, save sin, which the Son of God by becoming flesh has not valorised.’ Sport, he continued was one of the human activities waiting to be enlightened by God through Christ.
Misuse
Early church fathers were not always so positive. Tertullian wrote of equestrian skills becoming an instrument of demons when ‘pressed into the service of the games’, a misuse of God’s creation by God’s creatures.
In 1364, the Synod of Ely forbade its clergy to play games. Puritans considered sport poor use of time, associated with drinking, gambling and bad company, and a misuse of Sunday. In the 18th century, a Reverend Samuel Ashe is said to have hid in the trees by the sports field on Sunday afternoons waiting to pounce on the football with a pin, deflating the frivolity of the local youths.
However, we could draw up a long list of Christian athletes both past and present who provide postive role models for children and youth, as well as of the benefits of sport to health, discipline, social skills, community spirit and even to international relations.
The Bible has a high view of the body as ‘fearfully and wonderfully made’, a gift from God to be developed as a talent. But as in all areas of life, faithfulness and character always trumps success.
As with other areas of human life and activity, sports can be misused and idolised, or can be redeemed and used to glorify God. We noted last week how the British contribution to provide sport rules, banning cruelty to humans and animals, arose from a Christian conscience.
So, does God favour those who pray to him before the game or race? John Paul II said he didn’t believe in praying for victory–except when Poland played Germany at the World Cup.
Till next week,
Jeff Fountain

If Europeans studied their history, they would count their blessings, realise they were freer and…

The time seemed ripe last week to confront some Evangelical sacred cows. At an annual…