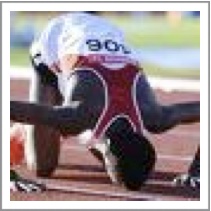 Europe’s Summer of Sport enters its third phase this week. The London Olympics follow hard on the heels of the Tour de France, which jumped the gun even before the European Football Championships final.

Meanwhile, sport will not distract Europe’s Muslims from observing their most important religious season of the year, While millions of Europeans will sit in front of their television sets, snacking and drinking as their national athletes compete for glory, devout Muslims will discipline themselves to observe one of the highest forms of Islamic worship: fasting.
Rising early for breakfast before the day begins, they will  eat or drink nothing else until the sun disappears over the horizon–each day from now until August 18. Ramadan, the ninth month of the Islamic lunar calendar, falls in the middle of (northern) summer this year. That means getting up to share a meal called Sahur together before the fast begins at dawn, today that was about 5:48a.m. Then the first of five daily prayers, Fajr, is offered. Nightfall in Holland today is 9.45pm.
Fasting together as a worldwide community–Ummah–affirms the brotherhood and equality of man before Allah.
Dilemma
However, the timing of Ramadan this year poses a great dilemma for over 3000 Muslim Olympic athletes competing in London. Obviously fasting could affect performances and diminish chances of winning an Olympic medal.
Muslim fasting has created problems for sports bodies in recent years, as when the German club of a Moroccan football player said his contract would not allow him to fast from sunrise to sunset. After the club contacted the German Central Muslim Council, which in turn consulted the Al Azhar Mosque in Egypt, a fatwa was issued to allow professional football players to eat and drink during Ramadan.
Now with the Olympic opening ceremony just days away, the issue has become a public question in the Muslim world: does national glory trump athletes’ personal interests?
One British rower with a Moroccan father and an English mother chose not to fast after consulting Islamic clerics. He is obliged to provide food for 60 poor Moroccans during the 30 days of Ramadan: 1800 meals!
But that decision sparked heated debate back in Morocco, as newspaper readers felt such an exception should only be made for fighters in a jihad. Some called the sportsman a kafir, a nonbeliever or apostate.
Urged by the Moroccan Sports Ministry, the Ministry of Religious Affairs last week issued an official fatwa for Moroccan athletes, exempting participants from fasting during the Olympic Games. The fatwa was based on a verse in the Koran excusing travellers from fasting.
But the Grand Mufti of Dubai says Muslims competing in the Olympics should observe the daytime fast, regardless of how it affected their performance.
Sporting is a choice, he argues, not a requirement in Islam. Such optional activity, therefore, does not warrant athletes breaking their fast. Besides, Muslim athletes represent Islam at the Olympics, and therefore should observe the fast. As ambassadors of their faith, they should not do anything forbidden by Islam.
If fasting threatens competitors’ health or causes extreme fatigue, he concedes, they may eat or drink. But to break fast without being hungry or thirsty is like submitting to one’s cravings and lusts, and not putting God’s desire first, according the mufti.
Challenge
For secular Europeans, such talk seems bizarre, outdated and totally at odds with modern times. For European Christians, it poses a challenge. Firstly it challenges us to see the commitment of the Muslim peoples to fasting, whatever their heart motivation might be. When in history did the Christian world ever unite in fasting? from dawn to dusk?
Secondly, it challenges us to pray for the Muslim world during their fasting season, a season when devout Muslims fast for the sole purpose of pleasing Allah and seeking his mercy; when fasting teaches one to share the sufferings of the less fortunate; when fasting leads to appreciation of  the bounties of Allah, usually taken for granted; and when  the faithful are encouraged to practice charity and generosity.
As Muslims are joining in a world-wide community this month, Christians too are joining hands in prayer across Europe and around the world with the 30-days Prayer for the Muslim World Network. Daily prayer topics can be downloaded from www.30-days.net, to pray for Muslims to receive a revelation of God through Isa (Jesus).
It’s the least we can do.
Till next week,
Jeff Fountain

WHOEVER CAME UP WITH THE IDEA OF CATEGORISING THE WORLD'S NATIONS AS 'UNREACHED' (WORLD A),…