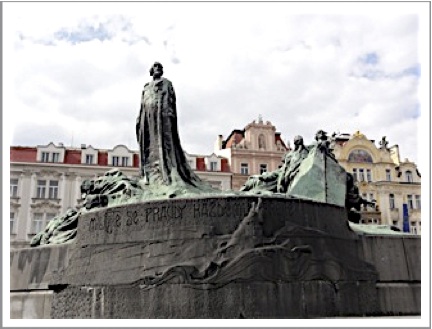 Prague, one of Europe’s most beautiful cities, was the powder keg for a most ugly phase of the continent’s history, the Thirty Years War. That conflagration which spread across much of Central and Western Europe began with a bizarre event in 1618 called the ‘defenestration’, when city nobles threw two imperial envoys out of the palace window.

Fortunately for the gentlemen concerned, they landed in a pile of manure, humiliated but unscathed. Unfortunately for the nobles who dared to challenge the emperor’s authority, all 27 of them were condemned to death after the Catholic emperor’s armies defeated Protestant forces at the Battle of White Mountain in 1620.
The executioner began his work at 5am on the morning of the longest day the following summer, June 21, 1621. Four hours and four swords later, he had chopped off all the noble heads in the Old Town Square. Today 27 white inlaid crosses mark the spot and commemorate the uprising against the powers that put an end to two centuries of religious freedom and reform which had begun with the ministry of Jan Hus, a whole century before Luther’s Reformation.
Dominating the Old Town Square is a great bronze memorial to Hus and his followers, the Hussites. Erected in 1915 on the 500th anniversary of the national hero’s martyrdom, it was funded by Czech citizens, despite the Great War. The sculptor wrote that the reformer’s renown had ‘become the spirit and the life of the Czech nation’.
Death & devastation
Large letters on the front of the monument carry Hus’s words to his followers written awaiting his martyrdom in Constance: Love one another and desire truth for everyone.
Hus’s declaration that ‘truth prevails‘ found permanent expression as the Czech national motto. Once more, love and truth–the soft powers of Christianity–resurfaced in our awareness, as they have many times on this Heritage Tour.
The Thirty Years War was the backdrop to the life of that other national Czech hero, Jan Amos Comenius, whose name we also encountered on this tour in Amsterdam, Naarden and Herrnhut. Last bishop of the Ancient Moravian Church and acknowledged father of modern education, Comenius suffered personally during the war with the loss of wife and children as well as manuscripts representing years of work.
Appalled by the senseless death and devastation across much of Central and Western Europe, and especially to his beloved homeland, Comenius was often a lone voice calling for toleration, reconciliation and education to counter narrow-mindedness and bigotry of his day as he travelled Europe, pleading with rulers to pursue peace.
Yet tolerance and openness to other traditions was often considered treason. It took a brave soul to propose that what the warring factions had in common was actually greater than what separated them.
Unity, liberty, charity
Another such brave soul was Peter Meiderlin, a little-known Lutheran pastor from Augsburg. In 1627, while the fighting still raged, he produced a tract in which he described a dream in which the devil tries to recruit a devout theologian to join an order of the doctrinally pure elect. Then Christ appears to encourage him to remain loyal to the Word of God in simplicity and humility of heart.
Meiderlin concludes: ‘Si nos servaremus In necessariis Unitatem, In non-necessariis Libertatem, In utrisque Charitatem, optimo certe loco essent res nostrae.’ [‘We would be in the best shape if we kept in essentials, Unity; in non-essentials, Liberty; and in both Charity.’] This oft-quoted saying–‘In essentials, Unity; in non-essentials, Liberty; in all things, Charity’–has earned itself a special name among German theologians: the ‘Friedensspruch’, or ‘Peace Saying’.
The Moravians, Comenius’ spiritual offspring, also used and practised this saying. Count Zinzendorf, leader of the Herrnhut community where we spent this past weekend, was called by Karl Barth ‘the original ecumenist’.
Ah, but what are the ‘essentials’?
The Lordship of Christ and the authority of the Word of God surely would bring us a long way! Speaking at Luther’s monastery in Erfurt last November (which we visited last Thursday), Pope Benedict expressed his regret that Rome had not stressed commonalities rather than differences at the time of the Reformation.
Till next week,
Jeff Fountain

A Place Of Healing

Tomorrow is Europe Day, May 9, a day to reflect on belonging to the diverse…