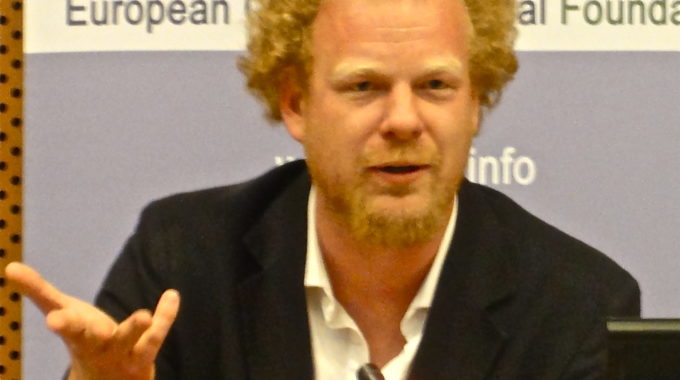 Modern economics has become a zombie, a body detached from the soul which gave it life, argues Tomas Sedlácek, former economic advisor to Vaclav Havel.

A zombie works efficiently, he explains, but without compassion, tenderness or understanding. The result is a hard, inhuman and eventually self-devouring and devastating system.
Dr Sedlácek was speaking last week in Brussels at the European Congress of the European Christian Political Foundation on ‘Values, foundations for Europe’s economy’. Chief macroeconomic strategist at the Czech bank SOB, Sedlácek lectures at Charles University in Prague and sits on the National Economic Council.
To his audience gathered in the European Parliament buildings he said that while economic thinking had been made possible by Christianity, thinking christianly was impossible without economic thinking.
In a foreword to a book presented during the congress, After Capitalism, by Paul Mills and Michael Schluter, he wrote that the worlds of faith and of economics were not far apart; the one was embodied in the other. Both Old and New Testaments were full of economic thinking and norms. Present day market capitalism was a secularised offspring of Hebrew and Christian tradition, beliefs and hopes.
Our belief in fairness, protecting the weaker from the stronger, our hope of a better future (even some prospect of ‘heaven on earth’), our belief in human dignity, and in freedom and adherence to legal rules, all came from faith rather than from science.
Disjointedness
The credit crunch was really a faith crunch, credit coming from credo, to believe, he explained to the politicians, lobbyists and activists present. So also was the debt crunch a sin crunch, as illustrated in Matthew’s version of the Lord’s Prayer: Forgive us our debts… That was the prayer of Wall St today, he said, even though they didn’t forgive others!
Jesus used economic terms in explaining the gospel. When we read the Financial Times, we could read it in terms of the gospel. Like the unforgiving servant, the banks asked for debt forgiveness but didn’t forgive mortgages.
The spirit of our system was born of values from the Bible, and the body–the instruments and institutions–had been added around it to form our present system. What had gone wrong, then, was that the body had been divorced from the soul. It worked, but without empathy or feeling. This disjointedness was why so many felt uncomfortable with today’s system. The biblical texts, being the foundation stone of our western civilisation, not only could reawaken the soul, but also provided guidelines for the institutions and markets that had gone awry without anybody really examining them, he wrote in his foreword.
Pioneers of modern economics like David Ricardo and Karl Marx developed economics as a science without norms. According to Milton Friedman, economics was value free. But that statement itself was a value, Sedlácek pointed out. The problems of economics were not merely mathematical, and could not be cured by mathematics.  Greed–being constantly dissatisfied and always wanting more–formed the heart of our civilization.
Manic-depressive
A best-seller in the Czech Republic, Sedlácek’s own book, Economics of Good and Evil was published last year in English by Oxford University Press and also topped book sales in Germany. It describes economics as a cultural phenomenon and a product of our civilization closely tied with philosophy, anthropology, religion, myth and the arts. Economics ultimately revolved around the question of how we ought to live, it argued. A successful play in Prague based on the book translated the author’s parables and arguments into dialogue and engagement with the audience.
In Brussels, the 35-year-old economics strategist suggested that the problem with today’s economy was not simply that it was depressed, but that it was manic-depressive. In its manic phase, it had a very optimistic outlook, spent more than it could afford, and was extremely creative and efficient. Healing for the manic-depressive started with addressing the manic phase, not the depression. Stabilisers, decreased appetite, slowing down the manic drive towards growth, desire and increased GDP were needed. We had forgotten the sabbath, he told his audience, a basic oft-repeated principle in the Bible: Relax! Slow down!
And yet, he concluded, there was still hope for Europe. Despite the current crisis, Europe was more stable than the US or Japan, where half the states or one third of the regions respectively would be bankrupt without heavy internal financial transfer as was now required in the EU.
The European dream, he believed, was still a better dream.
Till next week,
Jeff Fountain

The state we’re in

In the church this side of the barricades

Dr. Evert van de Poll continues his discussion on the understanding of Europe as a…