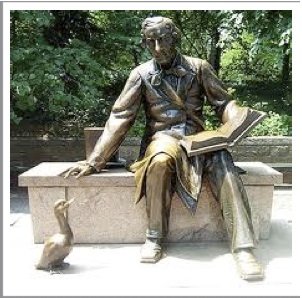 Once upon a time, in a city called Copenhagen, there lived a story teller named Hans Christian Andersen (1805-75).
His many tales, including The Ugly Duckling, The Little Mermaid, The Princess and the Pea, The Snow Queen, The Ice Maiden and The Philosopher’s Stone have been enjoyed by young and old worldwide for over 150 years.
Perhaps if the master story-teller were to return to his home city today and choose a tale to illustrate our times, he would tell us of The Emperor’s New Suit. For it exposes how pride and political correctness prevent obvious truths from being seen or admitted.
The vain emperor–a dedicated follower of fashion–was duped by swindlers who promised to make him a suit from cloth which was invisible to stupid or incompetent people. Receiving payment in advance, the pseudo-tailors pretended to be hard at work day and night on their empty looms creating their nonexistent suit. Each of the emperor’s messengers sent to check on the con-men’s progress were too proud to admit they could not see the cloth.
The day came for the emperor to try on his new ‘suit’ and parade through the streets. Now he too was caught up in the web of deceit and make-believe, unwilling to state the obvious for fear of being considered stupid.
It took a naïve child, oblivious to the game adults play, to state the obvious: ‘The emperor has no clothes on!’ While the crowd agreed with the child, the emperor played out the pretense to the end. As did his chamberlains, who, Andersen wrote, “walked with still greater dignity, as if they carried the train which did not exist.”
Trapped
Today Europeans parade through the streets in overt dispays of ‘freedom’ and taboo-breaking behaviour, overthrowing ‘outdated’ and ‘restrictive’ conventions. Politicians fall over each other in the rush to be popular and progressive, and to introduce ‘enlightened’ legislation in keeping with the times.
Talk of equality and rights flows freely without any thought given to the origins of such concepts, as if as self-evident as, well, motherhood. Motherhood?! Now there’s an old-fashioned concept! Who wants to defend motherhood these days? Who wants to get trapped in a long-term relationship with a partner? let alone have children interfering with your career… or your sex-life?
Today the new ‘motherhood’ is sustainability. At least in Europe. We all need to drive low-carbon-emission cars, recycle waste and insulate our houses, along with a hundred others measures to sustain the environment.
But even a child can see our hypocrisy. We’re not truly interested in sustainability–not when we promote same-sex marriage or sex-in-the-city lifestyles and decry motherhood. Every European nation has a fertility rate well below the sustainability level of 2.1. When research after research demonstrates that stable heterosexual marriages lead to greater health, wealth and happiness, why do politicians continue to pretend that the future belongs to those who overthrow time-tested conventions? Why do they insist on playing out their pretense to the end?
Conversation
Pride, greed and political correctness have led Europe into moral blindness and social, financial and political crisis. Is there a way out?
There are no easy answers. No one is promising a fairy tale future any more. No one promises prospects of living happily ever after. But neither can we simply shrug our shoulders and pretend nothing is amiss.
If you’re concerned about these issues, about how today’s crises are affecting economics, politics, youth and health, and about how the body of Christ can respond to these challenges, I invite you to join the conversation in H.C. Andersen’s city next month, May 9 & 10 at The State of Europe Forum. Europarliamentarian Tunne Kelam from Estonia will address the question, ‘Is the game over?’ After responses from the Archbishop of Canterbury’s representative to the EU, Dr Gary Wilton, the general secretary of the European Evangelical Alliance, Rev Niek Tramper, Danish politician Tove Videbaek and Martin Bucer Seminary rector Prof Dr Thomas Schirrmacher, and open discussion, interest groups will meet to seek biblical responses to today’s challenges. (Reply to this ww if interested. For further information, see www.tinyurl.com/soeforum).
If you’re not concerned, simply follow on behind the naked emperor ‘with still greater dignity, as if carrying a train which does not exist’.

Only two days into our Celtic heritage Tour, our group of 14 pilgrims is already…

THE RECENT CARTOON RIOTS STIR IN ME FEELINGS OF AMBIVILENCE. On the one hand, we…

Time for one last Kuyper analysis before the centennial year of 2020 expires. None-too-early, a centenary Kuyper-magazine has just appeared in the Dutch shops, edited by Kuyper-specialist George Harink of the Free University.
This Post Has 0 Comments