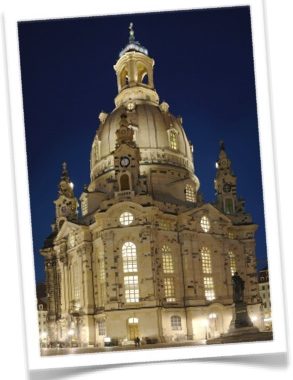 The bombs rained down on Dresden on the night of February 15, 1945. At Stalin’s request, Allied bombers wreaked vengeance on the German people, killing over 20,000 civilians (at conservative estimates) as well as refugees and Allied prisoners of war in a horrific firestorm that laid waste the inner city.

The magnificent ‘Florence of the Elbe’, city of high art and culture, and a wonder of baroque architecture built over centuries, was destroyed in one barbaric attack.
The old cross atop the famous Frauenkirche plummeted some 90 metres to the ground as the dome collapsed, to lie for almost 50 years lost under the ruins. In 1993, amid great excitement, archaeologists clearing the rubble of the church discovered the cross bent and mangled, but not destroyed. Today inside the reconstructed Frauenkirche, the cross has been erected as a lasting symbol of reconstruction and resurrection. Visitors are invited to write prayer requests there and light a candle.
One of the world’s most visited churches, the Frauenkirche had predecessor churches dedicated to Mary stretching back over a thousand years. The ‘new’ 18th century building reflected Lutheran Protestant theology in its circular sanctuary, now splendid in light pastel egg-white based colours, and reminiscent of an opera house.
Ironically, in light of the church’s destruction by Allied bombers, the Lutheran Bishop of Saxony had taken a brave stand against Nazi proclamations in this sanctuary of the Frauenkirche.
Healing
The famous dome structure dominated Dresden’s skyline for 200 years until its destruction. As the 30-strong Swiss group I was travelling with on a Heritage Tour this past week approached the city from the west, we could see the dome again rising among the also recently reconstructed steeples and towers.
Up close, signs of the tragic destruction were clearly visible on the reconstructed walls and dome. The darker old stones juxtaposed next to the pristine new masonry symbolised the destruction and suffering of war, as well as the healing and reconciliation now embodied in the church.
Large parts of the altar were salvaged from under the rubble more or less intact. As reconstruction of churches was not a priority under communism, serious work did not begin until after the reunification of Germany. Over more than a decade, following original plans and using original materials where possible, the rebuilding was finally completed by Reformation Day in 2005. A large bronze image of the reformer Martin Luther once more dominates the square in front of the church.
The crypt of the church, the so-called Lower Church, has been dedicated to the message of forgiveness, reconciliation and new beginnings. In the form of a Greek cross (with arms of equal length), the Lower Church witnessed services, devotions, ecumenical evensong and concerts while the main sanctuary was being reconstructed. In the centre, over a monumental altar of black Irish Iimestone, hangs a three-dimensional stone cross. Five chapels in the crypt offer places of silence, contemplation and prayer around the theme of destruction and construction, reminding visitors that ‘we are again and again held responsible for halting the powers of destruction’.
Haunted
High on the top of the new dome today is  the new cross with three layers of gold leaf, financed by British donations and made by British sculptor Alan Smith. Smith’s father had been one of the bomber pilots who had helped destroy Dresden. Haunted by the memories of that fateful night, his father became a pacifist. For Smith, the seven-metre-tall gilded steel cross was the pinnacle of his artistic career, healing an open scar from his family’s past.
Dresden is linked with Coventry Cathedral in England, destroyed by German bombers in 1940. A copy of the Coventry Cross of Nails, originally forged from three medieval carpenter’s nails found in the smoking ruins,  stands on the altar of the Frauenkirche as a link in the Ecumenical Memorial Route across Europe. Both the cross and the church are remnants of destruction turned into signs of Christian hope and symbols of healed wounds.
Till next week,
Jeff Fountain

As ‘virtual pilgrims’ this past week, our summer school students and online participants – from…