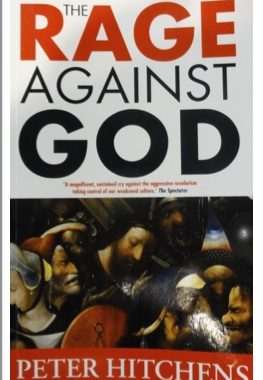 There’s nothing particularly new about the intense and emotional outcry against God and biblical morality led by today’s ‘new Atheists’. The psalmist asked in his day, ‘Why do the heathen rage?’ [Ps.2] One person well-qualified to answer that question is former atheist, Peter Hitchens. His famous and recently-deceased, anti-theist, older brother Christopher was one of the so-called ‘Four Horsemen of the New Atheism’–along with Richard Dawkins, Sam Harris and Daniel Dennett. In recent years they have produced books dismissing belief in God and accusing religion of being the source of everything that is wrong with this world: God is not great, The God Delusion, The end of faith, and more.
The younger Hitchens’ own book, The rage against God, displays on the cover a 15th century painting by Hieronymus Bosch, Christ carrying the cross, with the crowd pressing around Jesus, faces taut with rage and anger.
Hitchens tells his own story of rebellion against religious upbringing, starting with burning a Bible on the playing fields of his Cambridge boarding school. The Bible was the enemy’s book, he knew, the keystone of the arch he wished to bring down.
Congratulating himself on being able to be virtuous without hope of reward or fear of punishment, he revelled in his new freedom from external, absolute laws. He was now free from anything his conscience had been afraid of. He could behave without fear of eternal consequences. He had joined those self-confident members of the post-war generation who had grown out of the nursery myths of God, angels and heaven. For ‘Science’ explained everything that needed explanation.
Scorn
Intelligent and educated people sooner or later surely had to come to the same conclusions. Any of his superior and liberated generation who might desert the cause by some strange chance and convert to faith deserved scorn, fury and disgust. Frustrated rage that anyone could be so stupid, Hitchens writes, had been Virginia Woolf’s reaction to T.S.Eliot’s conversion in earlier times.
Hitchens describes the revolt of his own times, the 60’s,  against God in an England where there was a growing loss of confidence in the authorities, an England of decay and collapse that had lost her imperial glory, in which tired institutions were crumbling and the old morality was sustained only by custom and inertia.
His own morality became the fierce opposite of what he had been taught. He admits he lived entirely in the present, ignoring the experience and warnings of the past and the unknown, limitless dangers of the future.
Yet small things began to gnaw at his secular belief, a faith in a Godless universe and in humanity’s ability to achieve justice. A visit to a cathedral, or thoughts about the afterlife while viewing a painting of the Last Judgment, caused him to tremble ‘for the things of which (his) conscience was afraid’.
Later living in the Soviet Union, and witnessing the inability of a Godless society to deliver on promises of justice, equality and welfare, forced him to look honestly at the prejudices which had shaped his life thus far. He came to see that the Soviet authorities raged with such fury against Christianity because it stood for the rule of law and against the exploitation of the weak by the strong. He witnessed again and again how the Soviet state crushed liberty of thought in the name of the Enlightenment and Science.
Aggressive
He sees that same clear and present danger in today’s aggressive New Atheists. A new and intolerant utopianism seeks to drive the remaining traces of Christianity from the laws and constitutions of Europe and North America, he writes. The cause of personal liberation is ‘inflamed into special rage by any suggestion that the sexual urge should be restrained by moral limits, or that it should have any necessary connection with procreation’. Human rights are being derived from human desires, and must be policed by an ever more powerful state
Parents who raise their children with religious education are worse than child abusers, Dawkins and others repeatedly preach. Moral and religious education should be criminalised, they urge, as children have a human right not to have their minds crippled by exposure to other peoples‘ bad ideas, even those of parents.
Rage against God is loose, warns Hitchens. Hence this book, described by The Spectator as ‘a magnificent, sustained cry against the aggressive secularism taking control of our weakened culture’.
Till next week,
Jeff Fountain

Apostles of reconciliation (Part I)

Dan and Joe in Brussels