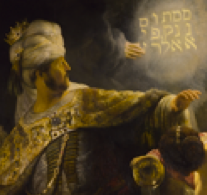 Last Friday was Epiphany, the day on the Church calendar marking the visit of the Magi to the infant Jesus, and thus the revelation of the Christ to the Gentiles. A good day therefore for an ‘epiphany’–a revelation–about the new year.
I was leading a group of students on a historical walk through old Amsterdam when we came to Rembrandt’s house. As I usually do, I produced copies of his paintings to explain some of the famous Dutch artist’s deep theological insights. One of these was Belshazzar’s Feast, a dramatic portrayal of the Babylonian strongman lavishly dressed in a jewel-bedecked cape, surrounded by partying officials and their women. Shock stares out of their bulging eyes at the divine message of judgement being written on the wall. Belshazzar’s crown teeters precariously on top of his turban as the truth dawns that the end is nigh.
Rembrandt painted this at the height of Holland’s golden age in the 17th century, when Amsterdam led the world economically, intellectually and in naval supremacy. Ample reason for feasting and self-congratulation. Yet Rembrandt reminded his fellow citizens timeless truths of the transitory nature of riches, power and hedonistic pleasure.
While I had often talked to groups about this painting, now at the start the new year I saw it in a new light–a warning of sober times ahead.
Unthinkable
The distraction of the Christmas break and the fireworks of New Year’s Eve have failed to chase away the gloomy prospects following the bizarre closing weeks of 2011. We seem to have entered a new irreversible phase of the six-decade-long European project. The writing is on the wall.
The orchestra may still be playing on the deck, the party may still be in full swing, the restaurants may still be full (as Berlusconi infamously said days before his recent ouster), but reality is catching up with us. The end may not be as sudden and dramatic as in Babylon–but who knows? The unthinkable, it has been said, can quickly become the inevitable.
The dreams and aspirations of the founding fathers of a just, peaceful, compassionate, united yet diverse Europe have been steadily undermined by recent decades of greed and self-interest. Too many orange lights, even red lights, have been ignored. Too many moral principles have been transgressed. Too many leaders have traded the spiritual values needed to build a climate of trust and solidarity for pragmatism, prosperity and power. Too many reckless bankers and investors have become filthy rich at the expense of ordinary pensioners. Too often the legitimacy of the European project has been undermined by democratic deficits and public mistrust.
Jonathan Sacks and Antoine Bodar warned in speeches last month that without biblical values, the European house was being built on sand. Before Christmas, Jacques Delors repeated to the German paper Die Welt that the old continent had little future without a spiritual soul.
We have earlier quoted Delors’ 1992 warning that unless a soul for Europe could be found within a decade, the game would be up. This inspired our theme for this year’s State of Europe Forum in Copenhagen, May 9&10: ‘Is the game over?’ But since we started planning, the question has become much more urgent. Could events overtake us?
Exception
Christian leaders have few opportunities to dialogue on these issues. Often we don’t even know the questions, let alone the answers! Yet they provide the context for all other Christian ministry in Europe.
Rembrandt’s painting reminds me how much we take for granted the stability, prosperity and opportunity for our work that peace has brought to Europe. Yet war–not peace–has been the norm in Europe throughout the ages. Our post-war times have been a remarkable exception. If we are serious about the Lord’s Prayer to see God’s kingdom come, his will being done in Europe, we will see the priority of addressing these issues.
Difficult times ahead could be the opportunity to rediscover spiritual foundations for Europe. ‘Man’s extremities are God’s opportunities’, we have often said in YWAM. Times of shakings are certainly moments that focus our attention on priorities, on things that really matter.
Belshazzar’s father, Nebuchadnezzar, was shaken into recognition of the only true God and of his everlasting kingdom. Darius too, the Persian king who conquered Belshazzar’s Babylon, came to confess the living God whose kingdom was forever. Daniel’s message is about the one unshakeable kingdom that will ‘fill the earth’ (Dan 2:35).
Our security should not be in the EU, or in any national government. Yet our passion should be to see God’s kingdom come in Europe–indeed, to fill the whole earth.
Till next week,

To my surprise, that man’s name kept popping up in different events I visited online…

The world watched as the fastest man on the planet crossed himself, pointed to heaven,…

The Pope, the Rabbi and the Atheists

The Pope, a rabbi and two atheists walked into a bar. The barkeeper said, ‘Is…