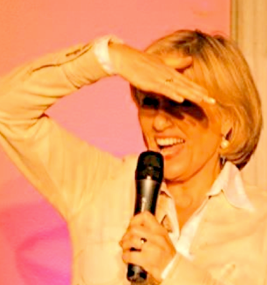 History through the ages was usually written by the victors. Which means the full story often went untold. History through the ages was also written largely by men. Which means again the full story has gone largely untold. Church history, in particular, has been an overwhelmingly male affair. Which means it is high time to bring balance to the record.
Feminists of course have been saying this for decades. But last weekend, when Paulien Zeeman-Lens (photo) presented a new Dutch translation of the book, Why not women? (Loren Cunningham and David Hamilton), our general ignorance of the significant role of women in the history of the church became painfully obvious.
Paulien had asked me to open the presentation with a short historical overview of the subject. Scanning the new translation, I quickly concluded that the role of women in history, while briefly alluded to, was not the focus of this book.
What else might be available in Dutch on the subject? I could find nothing among our books at hand. While one significant English-language tome on our shelves–Daughters of the Church by American authors Ruth A. Tucker and Walter Liefeld–offered an abundance of material, nothing seemed readily available for the popular Dutch market. I wondered for how many other European languages that would also be true.
I thought also of our upcoming Heritage Tour (June 25-July10) and realised how few women we put in the spotlight as we travel through some 40 historical locations in search of Europe’s soul. I made a mental note to correct this imbalance. Several names sprang to mind that I should follow up on.
Blindspot
We don’t have to be feminists to realise a serious blind-spot has distorted our reading of history. After all, we are talking about half (at least) of the whole Body of Christ.
So I decided to select three women from six periods of church history, starting with the early church. Despite being compiled in particularly patriarchal cultures, the Bible itself is remarkably full of stories about women. In time, of course, it became the inspiration for female emancipation.
From the start of the Christian church in Europe, women have been pioneers. The first European believer according to Luke’s account, was a Greek business-woman named Lydia. Paul met her by a fast-flowing stream just outside of Philippi, where she was already in the habit of meeting with other God-seekers on the sabbath.
Casual observers would have noticed nothing unusual that Saturday morning when Paul and Silas gathered with Lydia and her friends. But it proved to be the start of a movement that today encompasses millions of Europeans.
Torture
The book presentation was held–appropriately–in a complex over the Utrecht railway station called Hoog Catharijne. Every Dutch person knows the place. But few know who this ‘Catharijne’ was. A medieval convent dedicated to a St Catherine had been built close to where the complex now stands, before being moved to the centre of  the old town, where it has became a museum.
This Catherine was an outstanding example of a young woman used powerfully in evangelism in the late 3rd century at the height of Roman persecution. Converted herself from a pagan background in her home town of Alexandria, Egypt, she tried vainly to persuade Emperor Maxentius from persecuting believers. She led the empress to faith, and also many pagan philosophers the emperor sent to dispute with her. So he condemned the 23-year-old evangelist to death by torture on a breaking wheel. Hence today’s ‘Catherine wheel’ firework.
A third example we cited from the early church period was Paula (347-404), a young aristocratic widow from Rome who became a believer in a home group led by an older woman bible teacher. This Marcella introduced Paula to the scholar Jerome. Later Paula followed Jerome to Bethlehem where he worked on the Latin Vulgate translation of the Bible with her assistance. She herself became an expert in Hebrew. Jerome dedicated some of his book translations to Paula, and when criticised, he replied: “Deborah saved Israel; Esther delivered the children of God…Is it not to owmen that our Lord appeared after His Resurrection?’
Over the coming weeks we’ll return to more of these stories in different eras. Perhaps you could still join us on the Heritage Tour and discover these stories yourself: like Lioba, Boniface’s niece; Katherine of Bora, Luther’s remarkable wife; or Hildegard of Bingen… and many more!
Till next week,
Jeff Fountain

ST GEORGE, SUBJECT OF OUR LAST WEEKLY WORD, KEPT POPPING UP ALL WEEK HERE DOWN…