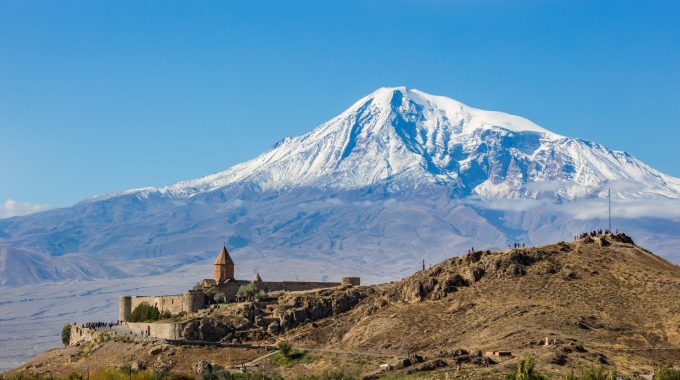 In the first three centuries, Christianity advanced through much bloodshed in Armenia. Nevertheless, these persecutions could not prevent the country from becoming the first official Christian nation and one of the earliest educated nations in the world.

Artashat is an Armenian town which can tell us more about these early developments. It is located 30 km South from Yerevan (stage 91). Artashat is a relatively new town and is the result of themerging of three small villages decided by the Soviet government after World War II.

While Artashat is of recent origin, its name points to a distant history related to this area. And to find traces of these ancient times, we will travel 12 km South-West of the town. There we arrive at the foot of a hill close to the fence separating Armenia from Turkey. On the top of the hill lies a monastery called Khor Virap from which you have a magnificent view of Mount Ararat.

Khor Virap monastery is one of the most important historic sights of Armenia. The first bishop of the Church of Armenia, Gregory the Illuminator, had been imprisoned for fourteen years in a cave of this hill before leading Tiridates III, the king of Armenia, to faith in Christ. Tiridates’ conversion finally led to Christianity being adopted as the official religion of the kingdom in 301, thus becoming the first kingdom to do so.

The place we will explore in this stage is actually located a few hundred metres North from the hill. There we discover the ruins of an ancient city, which used to be called Artashat. It was founded by king Artashes I who made it the new capital of his kingdom in 176 BC. Early sources testify that Artashat was, at some point, a city of significance. Both Greek philosophers Strabo and Plutarch called the city ‘the Armenian Carthage’. In the first century, Artashat was destroyed during the Alan invasions. However, the city was rebuilt at the end of the century.

So, why are we visiting the ruins of this pre-Christian city?

Artashat was, in fact, the location of an event that occurred between the first and the second century, and which had a significant impact on the Christianization of the Caucasian nations. This event is linked with an early evangelist named Chrysos.

Chrysos was part of a group of Greek officials that came to faith in Jesus Christ through the preaching of Thaddeus in Edessa. Following their conversion, a time of great persecution began in which two apostles, Thaddeus and Bartholomew, were executed. Chrysos and his disciples thus left Edessa (stage 92) to live in the mountains near the source of the Euphrates. There they lived simple lives as hermits for more than four decades.

Although the accounts regarding their lives are few, they seem to suggest that these believers devoted time to studying and thus formed one of the earliest educational centres of Armenia. Forty years later, a new king, who seemed more open to Christianity, began to reign. For Chrysos and his disciples, the time seemed ripe to leave their mountain and preach the Gospel in Artashat.

During their time in this Armenian city, seventeen Georgian servants of the court of Albania (present-day Azerbaijan) arrived in Artashat with the daughter of the king of Albania, who was also the wife of the king of Armenia. They met Chrysos during their visit and, as a result of his preaching, these Georgian servants became believers in Jesus Christ. After their conversion, they followed Chrysos back to his mountain community. Chrysos baptised them in the Euphrates and after his death as a martyr, one of the seventeen, a man named Suchias, became their new leader. The small community then moved to another mountain to escape martyrdom.

The new pagan king of Albania heard about the conversion of the former servants of the court. He sent an inquirer called Barnapas to track them down with a troop of soldiers. Upon finding them, Barnapas entreated the Georgians to adopt their pagan faith again and return to serve the king. Suchias and his companions, however, remained steadfast in their faith and refused to comply. As a result, the seventeen Georgians were arrested and put to death.

Despite the repeated persecutions, the Christian faith continued to advance in Armenia during the first three centuries. And actually, without the sacrifices of these first believers, Gregory the Illuminator might never have been able to bring king Tiridates III and his kingdom to adopt Christianity. It is also noteworthy that the mountain community which Chrysos, Suchias and their disciples formed was among the first centres of learning in Armenia.

To conclude, let me make a final comment about Artashat. The name of the city means ‘Joy of Arta’, and Arta is actually a Zoroastrian, and thus pre-Christian, concept which includes truth, righteousness, order and right working. With the arrival and final adoption of Christianity here, Artashat finally became worthy of its name, as it was one of the first Armenian cities to discover the source of ‘Joy of Arta’, the Lord Jesus Christ.