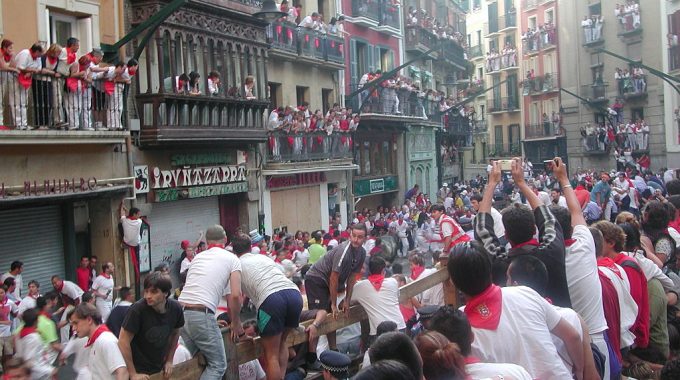 A herd of angry wild bulls running after hundreds of men down the narrow streets of an old town in Spain is a familiar scene to many these days. These events, which were rendered famous by the American author Ernest Hemingway, take place each summer in Pamplona. But do they have a connection with the first centuries of Christianity in Spain?

To discover this, in this last stage of a miniseries focusing on Spain, let’s travel to Pamplona. Or I could also say Iruña, for the capital of Navarre is a bilingual city, where both Spanish and Basque are spoken. We are, in fact, visiting the Basque Countries, although the proportion of Basque-speaking people is lower here than in the Northern parts of the region.

As I said, Pamplona is famous for its controversial bull running tradition. This is the main attraction of the eight-day festival of San Fermín, andtakes place each morning at 8 o’clock. To discover more about it, we will walk a few metres from the Plaza Consistorial, one of the narrow streets where the bull running happens, to the Iglesia de San Saturnino (Church of St. Saturnin).

Even though the current gothic building was erected in the 13th century, a church has been present here from a much earlier time. The original church was, in fact, built on the site of a Roman pagan temple and in mediaeval times, it became the main parish church of one of the three boroughs that form the city of Pamplona.

Both the Festival of San Fermín and the Church of St. Saturnin have a fascinating link to how the Gospel reached this area probably in Roman times. According to traditional accounts, Fermin and Saturnin are two of the first missionaries to reach Pamplona. Although it is impossible for us to separate history from legend, the accounts of their lives offer us a glimpse on how the Gospel may have reached this part of the world.

Saturnin, who is believed to have been born in Patras, Greece, was one of the first missionaries known as the “Apostles to the Gauls”. They were Christian men who were sent from Rome to minister in modern-day France. Saturnin arrived in Toulouse, the city North from the Pyrenees, probably in the third century. There, he preached the Gospel and some responded to his message. Among his first converts was a man named Honestus.

Honestus became one of Saturnin’s closest disciples. After completing a time of discipleship, Saturnin sent him across the Pyrenees to preach the Gospel in Navarre. Eventually he reached Pamplona and as a result of his ministry, Fermin, the son of a high-ranking Roman official of the city, was converted to faith in Christ. Later on, Saturnin joined Honestus in Pamplona and baptised Fermin in the Pocico de San Cernin (the small well of Saint Saturnin), just in front of what is today the Church of St. Saturnin.

Fermin then followed Saturnin to Toulouse where he was consecrated as the first bishop of Pamplona. Then he returned to his city to organise the local church. Later on, Fermin left Pamplona and became an itinerant missionary in Gaul, through regions such as current-day Aquitaine, Auvergne and Anjou, before reaching Amiens, to the North of Paris. In the time of the Diocletian persecutions against the Christians, Fermin was finally arrested there by the local authorities and died as a martyr on the 25th of September 303.

But let’s return to Pamplona. Now that we have discovered the origins of the Festival of Saint Fermín,what are the origins of the bull running event? Although we don’t know the answer with certainty, we can trace it back to two different sources. The first, which goes back to mediaeval times, is not particularly related to these accounts, but to a practical tradition. The butchers of Pamplona had to bring the bulls destined for slaughter into the city from the surrounding farms. To do so, the butchers would often run ahead of the bulls to draw them to the place of slaughter inside the city. This scene began to attract the attention of the citizens of Pamplona, and eventually became part of the city’s traditions.

The second reason behind the bull running tradition, however, is linked with Saturnin. It is believed that, like Fermin, Honestus and Saturnin died as martyrs. While Honestus probably died in Pamplona, the place of Saturnin’s death is disputed, being either Pamplona or Toulouse. In any case, according to the traditional account, he was attached to a bull that dragged him through the streets, until he finally died.

While it is very possible that a large part of the accounts regarding Saturnin and Fermin might not actually be true, they still reveal important truths. Firstly, the Gospel has reached this region, of which the continuous presence of a church on this site is a wonderful testimony. Secondly, it is highly probable that the persecutions of the third and fourth centuries in the Roman Empire did not spare the church in Pamplona.

Even though the current Festival of San Fermín and its famous bull running seem to have little to do with Christianity,they are powerful reminders of the history of the Gospel in the Iberian peninsula.

https://soundcloud.com/aeuropeanjourney/a-european-journey-83-magdeburg-germany During recent centuries, Europe has undergone relentless attempts to erase the Christian roots that…