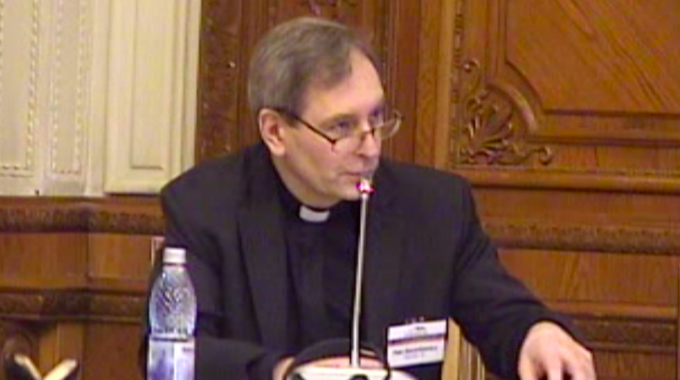 What are the aspirations of the populist movements that are rising across Europe? Is there anything good in them? During the State of Europe Forum 2019 in Bucharest, Msgr. Piotr Mazurkiewicz defined what model of society do Populists pursue.

In the ancient times, democracy was the government of an elite, of about 10% of inhabitants of Athens. But today we evaluate democracy as being the power of the people, of the whole society. Jacques Maritain said that the argument is strictly religious, that the term ‘people’, in Greek ‘laos’ but also ‘ekklesia’, are terms taken from ancient democracy, which were then used for the church as Catholic in the sense of universal, as the body of Christ, and for the people, as a mystical Body of Christ who needed respect. This was transferred into the political body, to the people as the political body. This is the main reason why we respect democracy so much today, because there was no rational argument to do this but only the respect of the decisions taken by the whole society.

There are different definitions of Populism. Once I heard that Populists are those who can communicate with the people. Then we can say that there are two totally different approaches. One approach says that the ordinary people living in a concrete world, with concrete problems, have on the one hand common sense and instinctive knowledge on how to move in the world. So the elites can learn from the people, and we can say that people are cleverer than the elites. So, politicians should trust people. Marsillius of Padova launched the idea that reason and virtues of ordinary people can be added together. For this reason a thousand of people are more intelligent than one expert. So here, in this sense, Populists are those who would like to take profit of this knowledge, of this rationality of people.

The totally opposite approach is that people are generally stupid, and politicians should take advantage of the ignorance of people, because they are not able to understand anything concerning real life, political decisions and so on. In this way, instead of talking and trying to convince people in a rational way, politicians can just try to move the people emotionally and, by manipulation, get their support. So you have here two different approaches.

One example concerning the first approach is seen through my experience with taxi drivers. When there were big demonstrations against the redefinition of marriage in France, a taxi driver in France said to me: ‘Father, I am Catholic, I don’t often go to church, but I know what is marriage.’ A taxi driver in Warsaw was calling his wife because he wanted to take his son to a football match. When he finished his call, he said to me: ‘Father, we divorced a few years ago, but through the children, we are bound forever’. A Muslim taxi driver in Berlin looked at me and said: ‘You have something to do with religion’. I said yes. He said: ‘This is a strange city because everyone is claiming that there is no God. You should work harder’. That was just natural knowledge.

Then why do people rebel against elites? One reason is that elites can be corrupted. The other is that elites are not loyal to society. This is a totally new problem linked with meritocracy. We are not living anymore in democratic regimes, but in meritocratic regimes. This means that the experts are not linked with their own societies, they are uprooted. This is very clear in Brussels. At the same time, they can move from one city to the other. If a politician fails in Romania, he can go to Brussels. If someone works for Goldman Sachs in Warsaw or in Greece, and the bank has problems because of a financial crisis, he will be employed elsewhere.

Former Secretary General of the Commission of Episcopal Conferences of the European Union COMECE in 2008-2012 based in Brussels, and professor at the University of Cardinal Stefan Wyszynski University in Warsaw.

Seeing with both eyes

My heart sank as I saw the speaking schedule. I was to lead a seminar…