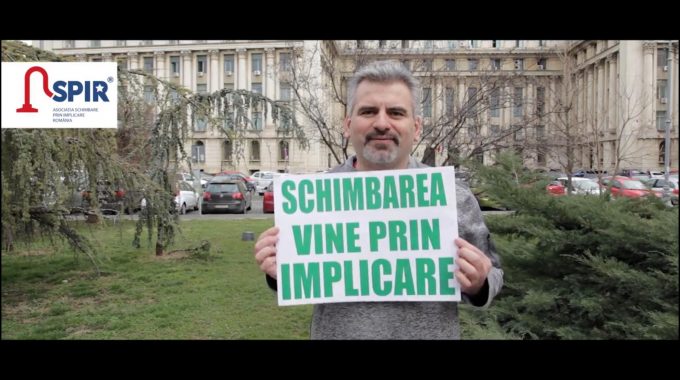 This is the transcript of a speech given by Romanian Pastor Cristian Soimaru during the State of Europe Forum 2019 in Bucharest.

I am a pastor and also part of a few NGO’s, among which an organisation called Asociația Schimbare Prin Implicare- Romania (ASPIR) (The Association Change Comes Through Involvement – Romania). Things get changed as we get involved, as we get our hands dirty, or where we invest our money. We are addressing issues in several places of Romania, aiming to give more dignity to people.

Through my over 25 years of involvement, I have learned a few things and some of lessons about the dangers. I see the danger with people being ‘mission-driven’ or ‘donor-driven’, especially within NGO’s. Usually these NGO’s start small but with a vision and with a good motivation. But it doesn’t take long before projects, budgets and people start coming in. Reports have then to be made and sometimes the original mission or vision gets slowly side-tracked. Then we become very much involved into activism. We do lots of good things and sometimes we start believing our own press, our own results. Sometimes we are not critical or wise enough to ask ourselves if what we are doing is really helping, really accomplishing the goals. Are we being transformative in what we do or are we just being busy? This is a challenge for many people. Yes we have to be busy but we must make sure that we are busy with the right things.

Especially in Europe, some of the biggest donations from institutional donors: the Norwegian funds, the European Union or some big companies. But sometimes they drive the agenda. Of course, it is a matter of win-win. We really need to build strong partnerships. It is the only way to tackle some of these big giants that we face, but very importantly, we shouldn’t sell our souls. When working with multinational and multibillionaire companies, I found out that they also need to be educated. We need to help them understand that they need to be willing to learn. The mistake that many people do is that they assume that these people from big institutions, who drive many projects, already know what is needed to be done. Nevertheless, we should go to those who have the data, those who have studied the topics in academic circles in order to build our projects. Sometimes we put the carriage before the horses. So let’s not be ‘mission driven’ or ‘donor driven’.

Sometimes we may just do things for the sake of doing things. I have seen a lot of people who are more concerned by how to make funds. If you work six months for an NGO, you will probably realise this tendency very quickly. I remember being happy when I raised my first hundred dollars. Nowadays we don’t do much with such an amount. I remember raising the first one hundred thousands dollars in one donation. The money was spent on big projects. But we have to make sure that we don’t become busy to make our project ‘sellable’. It is passion and compassion that should drive us. It is about going out to help somebody. It is about remembering the stories that first changed our lives. For me it was 27 years ago when I heard the stories of the pain, despair and abuses that some people were living.

Another big mistake that we do in Christian NGO’s is that we hide the Christian aspect of mission because we are told to be wise. It is true that sometimes some people are not wise, as they want to do only the religious work and not the compassion work. As an example, 26 years ago, when I first started to get involved by caring for the street kids in Bucharest, I started to share about this with some of the people in my church community. Some of them said that the street kids are the government’s fault, not the church’s fault. Others told me that the street kids are like the Gibeonites, who pretended to be poor to the people of Israel, that they are there to confuse us and to take our attention from the real cause of the Gospel. It is true that sometimes the church has become more of a social provider rather than an institution speaking about salvation, grace and the cross. This can also become a problem.

But what I want to emphasize is that the church can be both practical and theological at the same time. When Jesus gave the definition of the Church, he didn’t say: gather about 2300 people, form three NGO’s, five institutional structures, and then you will be the Church. He said: ‘Where two or three are gathered in my name, I am in their midst’. I believe that every time two or three people who come together, see a need, a person who is being trapped, a school which is abandoned, kids that are not taken care of, hospitals which don’t have basic material, if these two or three people come together, pray about it, think about it, start with the little they have in their hands, Jesus is in their midst.

Yes it is important to seek funds, talk to the leaders of the church, to get organized. Don’t let the current influence you. Keep mission in the centre. Keep Christ in the centre. Build as many and as strong connections as you can, with other Christians, with churches, with NGO’s, with politicians, with business people, because strength comes in the number as well. We can still do great things when we keep our focus on Christ and on his mission.

In the end it is about a Europe for the people, not about people for the institutions.

The Brits may be having doubts about their membership of the European Union, but for…

Europe as a whole still counts in the world. All over the world, this name…

This weekly word from Jeff Fountain, written on the 1st of September 2008 brings into…

From Jeff Fountain’s book Deeply Rooted. You can read the first part here. Monnet knew that…