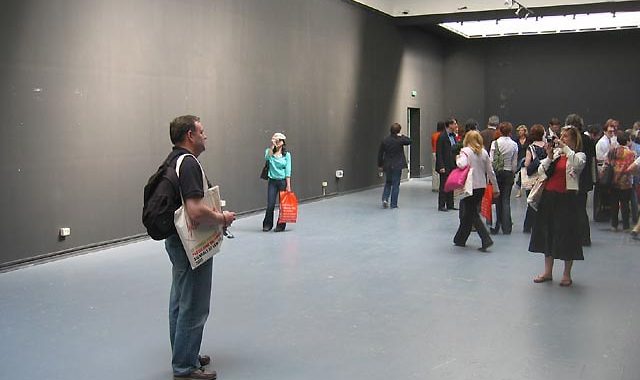 From Mediascapesto Ideoscapes: A Disembodied and Embodied Romanian Performance at the Venice Biennale (2005 vs. 2013)

Acknowledgment:Part of this research was supported by a grant of the Romanian National Authority for Scientific Research, CNCS – UEFISCDI, project number PN-II-ID-PCE-2011-3-1010.

How do we find our way in this maze regarding cultural identity and cultural memory? How do we bridge that gap between past, present and future, which is obviously what culture is trying to do?

Cultural memory is the subject of interpretation and analysis both for history (including historiography) and cultural studies. My take will be more from cultural studies. In terms of cultural memory, we talk about ”embodied memory” (Paul Connerton). That will be the connection with the performances that I chose for my presentation.

Romania ‘collided’ with the European Union in 2007. That was an interesting threshold for our country. Therefore I chose to see how Romania is constructing cultural memory after this ‘collision’, what we are bringing in Europe and how Europe is influencing us. Also, I chose to look at what would be the transition from communism to Europe or the European Union, and how is that reflected into politics and arts as well.

In order to do that, I chose a model for analysis from globalization theorist Arjun Appadurai. Because we live in a homogeneous, and at the same time very different world, in which people are forming ”different worlds”, Appadurai chose five dimensions in order to define the global floor, in other words to find our way in this maze that is called culture, which is a very difficult task.

The first dimension is Ethnoscapes, which would be the people who are living with all their ideas. Financescapes has to do with the capital and how it attempts to intermediate us into the reality; Technoscapes – how is technology trying to (inter)mediate us into the reality. Mediascapes, which is of particular interest to me, has to do with the way both technology and images created by technology influences us, and has a dialogue with society. Ideoscapes have to do more or less with the way and the power that those images are forming and transforming in the society, and the way the nations are using those powers.

Why did I chose mediascapes and ideoscapes out of the five dimensions? I deal a lot with the phenomenon of skepticism and theorists tend to believe that skepticism has to do a lot with the journalistic discourse. It is actually a construct that is transformed into society via media. I thought that media analysis would probably be the best way to see how we have adapted in the European Union. And the objective of this speech is to see how we have faced our entrance into the European Union both from the political and from the artistic side.

I studied this aspect from the political side and cultural policies, but for the purpose of this presentation, I will concentrate more on arts, and I chose the famous art exposition: Venice Biennale. Many countries have a pavilion there where they project what they consider to be most representative from their country in terms of arts. I wanted to see how Romania is dealing with its past in terms of arts and that’s why I chose to focus on Romanian pavilion of the 2005 Biennale, because it was an eclectic representation (see picture). Also this Biennale was two years before the Romanian integration in the EU and all the preparations had already started. So it was a really interesting dynamic to see how the identity of Romania and the European identity marched together in the Romanian minds.

2005 was a very dynamic year. A lot of money was invested in events and in things that had to do with the European Union. Today we know that it succeeded but at the time we did all the efforts politically and diplomatically for the integration (e.g. forty books were written in that year on that subject). A lot of artistic events, very propagandist also, took place on that year with a lot of money invested. Amidst these valiant efforts to join the European Union, we had this project at the Venice Biennale which was very Euro-skeptic and very much in contradiction with these efforts. The project was called European Influenza. The artist, Daniel Knorr, left the pavilion empty, only with the traces of the previous years, and they just had a reader that had texts from a collective number of artists that were cursing or criticizing Europe. Daniel Knorr was a very controversial figure. He is Romanian but he was living in Berlin for many years, and he was chosen to represent Romania during that time. Nicoleta Esinencu had a very controversial play that was presented among the other texts. Ironically, she won the European prize with that play, which means that she was financed by the European Union, but she was skeptical about the EU.

I did a media analysis to see how this representation appeared in the media. I studied articles from Romanian and international media and how the reactions of Romanian artists were towards this event. I need to make two observations: arts itself is considered to be a protest against any social or political order. In that key, I conducted my analysis to see whether art in this situation was such a protest or if it was a political statement, as many people considered it to be because of the moment we were in, since we were trying to get into the EU. So what was the key used to interpret this event? Was it a political or an artistic/ aesthetic key? Another observation is that the way we position ourselves is very different according the time we’re in. There were reactions that took place at that time, while several years after the Romanian entry into the EU, people tried to see things differently. People react differently according to where they are in time. When I conducted my research on this event I already had some times of distance from this event, and I could see more reactions. I analysed all the articles I could find, in written form, not on blogs, not anonymous, but the ones that appeared in real press.

I had three research questions: the first had to do with the way Romanians perceived the event: as I said before, it was read in an aesthetic or political key; the second question was about the way internationals saw the event, and my hypothesis was that it was seen more from the aesthetic point of view than from the political one; the third one was about how the artist himself perceived that event. In my results, I realised that my hypotheses were true to a certain point. In Romania, this representation was very much read in a political key. Lots of emails were sent to the Prime Minister, lots of scapegoats where chosen, and media tried to explain why this representation was not consistent with our political discourse. On the other hand, the international press was very keen on the Romanian representation. Some even proposed to grant them the winning the prize, because they read it from an aesthetic, absurd, conceptual artistic key. Interestingly, artists in Romania were divided: some appreciated these new tendencies in arts while others considered it to be a transgression of aesthetic values. The key used by the artists was still aesthetic but they were divided in their opinion.

The next three representations of Romania at the Venice Biennale were also dealing very much with the communist past, always trying to understand the memories and the past. But in 2013, the pavilion called An Immaterial Retrospective of the Venice Biennale, again an empty pavilion, was made of artists performing all the events that took place since the beginning the Biennales. In a way, it was an attempt to regurgitate all history, since we had a fresh start in freedom, even in the aesthetic world. Again, I did an analysis of this Biennale and I tried to see how it was perceived in both Romanian and international media. This Biennale was several years after Romania entered the EU.

After reaching my conclusions, it was still not clear whether this attempt of the Romanian artists, Alexandra Pirici and Manuel Pelmuș, was critical towards Centrism or towards the Biennale, or if it was an irony as we tried to incorporate all these events of a hundred years. This endeavor was also very futile, because they changed the representation everyday. Was it a sort of a praise of the spectators, an attempt to honour them by showing them something new everyday? Was it an expression of confidence in the future of art? Or was it an exercise of imagination, of finding our place in European history? Were we trying to take all history in one go, and continue from there? Actually, the 2013 Biennale was Romania’s gate to Europe. It was the biggest European event that Romania ever participated in. Though it is international, it is still our gate to Europe in a way, and this is how it is still perceived even today. Denying the past, accepting the past, dealing with the past, with our past, with the European past, trying to see our identity… what appeared in the media was very much a mixture of all these things. Also, artistic, aesthetic critique or comments in media were always politically contextualized. Many people were trying to see if the Biennale per se has also a political dimension.

As a conclusion, we cannot question or deny the past without questioning and denying the future. Once we deny the past, it takes a while to deal with our future. That is why many interesting titles (of the future Romanian representation at the Biennale, e.g. The Seductiveness of the Interval, 2009) had to do with this distance, this needed time to understand, to comprehend, to meditate and to deal with things. And of course, is cultural memory a question of identity? Are we dealing with our identity even if we represent it nicely in art or in different artistic representation? Is it a protest? Did we try to do great things?

As Paul Ricoeur says, when we deal with an event, we have two steps. The first step is disorder, a chaotic stage and in the second step we try to reorder things. This is very much what happens with us in this past-future exercise, both at political and society level. We try to find common ground with European identity and try to integrate ourselves in Europe. I think that it is a very good platform for opportunities. Alfio Cerami said that many people and many theorists believe that communism was a curse (and it was), and that it would not let us fly into future. But at the same time, it can be a platform for us to be very innovative and very creative.

Ileana Nicoleta Sălcudean is a Lecturer in the Department of Cinematography and Media from the Faculty of Theatre and Film, Babeș-Bolyai University. As of 2012, she holds a PhD in Sociology, with a thesis on “Cultural Policies and Identity Constructs in the European Context” (Babeș-Bolyai University). Her fields of interest include: cultural studies, sociology of culture, creative industries.

No, the game is not over–yet! There is still hope for Europe, participants at the…

Family get-togethers at Christmas and New Year this year will be greatly restricted by official COVID-19 guidelines. Year-end school vacations will be lengthened in several countries to increase social distancing, creating more pressure for parents struggling to juggle job and family at the best of times.
This Post Has 0 Comments