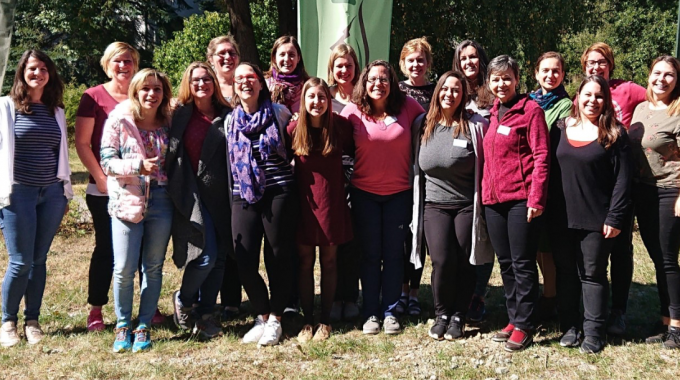 Many women across Europe face incredible challenges due to their gender. Sadly, the church often contributes to these as well. Reflecting on some of these here will also highlight some beautiful initiatives where churches and networks are determined to encourage every girl and woman to live their God ́s given calling, for the sake of His kingdom.

Europe has a population of about 740 million, with slightly more women than men, though the ratio is close.[1] In Eastern Europe however we find a larger difference between the male and female population, often due to greater life expectancy of females.[2]

Our churches in Europe portray a similar picture to that of Eastern Europe, with women in the majority. The report by the Sophia Network states that women make up around 65% of the UK Church.[3] This might be very similar to the overall European context.

Being in the majority however means very little due to the limited output of these women in European churches and in missions work. They often feel overlooked and face various challenges. Europe is geographically, spiritually, socially, economically, culturally diverse and therefore women’s experiences are not homogenous. Neither is the church context homogenous. The listed challenges here are not the same in each country but portray some of the barriers and issues women face as they endeavour to bring and live Jesus.

One of the issues women worldwide but also in Europe face is gender- based violence. The UN estimates that 35 percent of women have experienced either physical and/or sexual violence (not including sexual harassment) at some point in their lives.[4] This was also identified as the third biggest obstacle in the survey undertaken by the World Evangelical Alliance (WEA) and the Lausanne Movement who had interviewed nearly 500 Christian women leaders globally. As a result of this survey and the first ever consultation “Rise in Strength”, these global leaders published a statement, “Call to all Christians” in several languages.[5]

Adding to the violence, 1 in 10 women in the European Union report have experienced cyber-harassment since the age of 15 (including having received unwanted, offensive sexually explicit emails or SMS messages, or offensive, inappropriate advances on social networking sites). The risk is highest among young women between 18 and 29 years of age”.

In 2018, the Sophia Network published the results of their Minding the Gap survey which had been the largest survey ever undertaken among women in the UK church. Over 1200 responded and two-thirds of them had shared that they had experienced sexism through their calling being questioned and being limited to traditional roles.[6]

When mentoring and talking with women in ministries across Europe, they often mention that their voices are not taken seriously or they don ́t feel heard. If they sit in meetings, they are not expected to contribute. If a leadership position becomes open, in many cases a man is chosen. Not necessarily because he is more qualified but because he has the “right” gender. We girls often hear that we exist to run the family and support our husbands in their calling. And we hear this from men and women alike.

Looking towards Eastern Europe, according to Girls Not Brides, 7% of girls in Macedonia are married before 18 and 1 in 10 in Albania.[7] Girls and young women are seen as house workforce, needed to raise children, so they are married at a young age with their husband selected by family.

There is often a division of labour which we also find in the church. Girls do the children ́s ministry , women ́s ministry etc.; men do the pulpit stuff.

A lot of women in Western Europe struggle with juggling work, marriage and children. In Central and Eastern Europe, women often have to take care for the financial situation of the whole family, meaning they have to work hard, and some have two jobs.

Patriarchy falls into this category. It is a common thread through women ́s experiences and manifests itself in different ways. Advertising and media expose her constantly to patriarchal norms, which often reduce women to a collection of body parts with an unrealistic beauty idea and exists for male pleasure. As girls grow up, they come to understand that no matter their achievements or qualifications, society views her worth based on physical attractiveness in the eyes of men.

This leads often to the statement, “I do not feel good enough”. In the largest survey of girls in the UK, 2 in 3 of girls aged 7-21 years old feel that they are not good enough.[8] When girls in church and ministry are asked to take on leadership, to preach etc., often their response will be, “I am not good enough”.

What are some church and mission responses?

The Girls Brigade across Europe[9] is an example of encouraging girls at young age. For over 126 years, it has invested in girls, helping them discover life to the full and equipping them in leadership; thus affirming that their gender is no coincidence or a mistake committed by God.

Well-known Swiss evangelist Andreas Boppart started an initiative in 2019 to encourage women to preach and lead. Seventy women attended the first seminar in May 2019 “Raise your voice”. He was their champion and trainer. This year Naomi Dawson, a young leader herself and now working with IFES, started a Facebook group[10] for women who are passionate about evangelism where they can mention their opportunities for preaching and prayer.

What we can do together is to provide visibility to these women who are called and are stepping out and provide opportunities to teach, lead, serve. Natalie Collins from the UK, together with others created a platform, Project 3:28 (based on Galatians 3:28) which provides conference statistics and a database of female speakers.[11] More and more conferences try to balance the gender of speakers and have a ratio for women to attend and teach. To aim high, with slow success.

We as women need to champion each other but also need men to champion us to fulfil our missions. Before I became a CEO for a European youth missions network, I was desperately looking for a female mentor in leadership. The few I encountered where not willing to walk the journey with me. I promised God that I would not let this happen to the next generation of female leaders in church.

Five years ago, four of us girlfriends started a weekend for younger female leaders from across Germany, gathering about 25 ladies each time. The experience was very inspiring, sometimes comforting, and always encouraging to persevere and follow the dreams given. This year I started a European format called “Renovo” where Claire Rush and I gathered 18 younger women from 11 countries. The response was fantastic and we plan to repeat this.

Mary Lederleitner in her most recent book highlights 95 voices of global female mission leaders who she interviewed for “Women in God ́s Mission – called to serve and lead”.[12] Women have always advanced God ́s mission through history. They are used by God to continue doing this today, facing the various obstacles and being willing to pay the price.

The task ahead of us is to encourage women and men to work together in equal partnership. We are in this together seeking to see Europe once again being changed by God. For this, it needs all of us. Young and old. Male and female. Not just to encounter the injustices, violence, sexism in church but together to fulfil our highest calling in Europe. The Great Commission in reaching Europe will not be fulfilled unless women and men work in partnership for the Gospel.

Picture: Renovo 2019: a retreat for women leaders from the millennial generation

A picnic of hope

Thirty years ago today, a seemingly innocent event took place on the border of Hungary…

As we await the arrival of the New Year, perhaps enjoying a few quieter days…