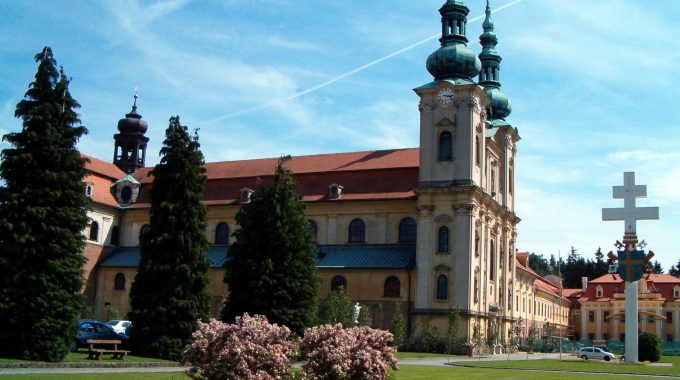 Today is the fourth stage of our miniseries exploring some of the history of the Orthodox Church.

After three stages around the Black Sea, including two in Constantinople (today Istanbul), we will now go towards Central Europe, to the village of Velehrad in the Czech Republic.

The village is located in the region of Zlín, near the Morava river, about 50 km west from the border with Slovakia. Approaching the village from the town of Staré Město we cross green fields and then see a tall church on the horizon.

This tall baroque-style church is actually the second tallest cathedral in the nation after St. Vitus cathedral in Prague. This can seem quite surprising for a village with only slightly more than a thousand inhabitants. To add to the surprising nature of this cathedral is the fact that it is not even Eastern Orthodox but Roman Catholic.

So why is there such a big cathedral here? And what link could it possibly have with the history of the Eastern Orthodox Church?

In addition to being dedicated to Mary, it is also dedicated to Cyril and Methodius, the two men that our episode will focus on today.

Cyril and Methodius were actually brothers born in Thessaloniki, Greece, at the beginning of the 9thcentury. They were the sons of a military commander and they studied at the university of Constantinople where the Patriarch Photius was their teacher. Then they became priests and later missionaries among the Khazars, a Turkic tribe, probably in Crimea.

In their days, Europe was undergoing major political changes. In the east Constantinople had then been the capital of the Byzantine Empire (Eastern Roman Empire) for five hundred years. In the west, however, the political situation had been unstable since the collapse of Rome two centuries earlier. Nevertheless,some years before the birth of Cyril and Methodius, the Pope crowned Charlemagne as Emperor of the new Germanic Holy Roman Empire, which ushered in a new era of relative stability. As a result, two neighbouring empires ruled the European continent, and as we can imagine, this also led to rivalries.

These rivalries were not only political but also ecclesiastical, between the dominant churches of the two empires, Rome and Constantinople. Sadly, this lead to the Great Schism two centuries later. The rivalries were especially felt in the lands which formed the border between the two empires, which meant mainly in the Balkans but also here, in what was thenthe kingdom of Moravia.

At the time of Charlemagne, Moravia was an unevangelized Slavic kingdom. And for this reason Charlemagne helped create a new Catholic bishopric in the land, which would be under the supervision of the Archbishop of Passau.

The king Rostislav of Moravia saw two problems with this bishopric. The first one was political: a Catholic bishopric under the supervision of the archbishop of Passau (in Charlemagne’s Empire) meant that Moravia would sooner or later inevitably fall under the rule of the Holy Roman Empire. The second problem was linguistic: Since the Church of Rome imposed Latin as the only liturgical language, the Moravians didn’t learn much about the new religion.

Since linguistic uniformity was not imposed in the Church of Constantinople, Rostislav sought their help and sent the following message to the Byzantine Emperor Michael in Constantinople:

The Emperor quickly found two perfect candidates for the task: Cyril and Methodius. They were learned, they knew the Slavonic language and they had experience in the mission field. The two brothers set off to Moravia, where they created an alphabet and started translating the Sacred texts into the Slavonic language.

This displeased the German Catholics who saw the introduction of the new alphabet in the church as a heresy, and probably also as a threat to their bishopric. Thus Pope Nicholas summoned them to Rome. Cyril and Methodius succeeded in convincing him of the worth of their mission in Moravia. Sadly, however, Cyril died during his stay in Rome. So Methodius returned alone after being given the title of Metropolitan of Moravia and Pannonia.

While Methodius continued his work, the conflict with the local Catholic authorities continued to fester. So later on, Methodius was again summoned to Rome, this time by Pope John VIII. Here again, Methodius succeeded in gaining the Pope’s support. The Pope recognized the alphabet that would later be know as Cyrillic, and the use of the Slavonic language in the liturgy. Methodius returned again to Moravia where he finished his work and died right here in Velehrad in 885.

The work of Cyril and Methodius gave to most Slavic nations the Cyrillic alphabet, which is still used today. Paradoxically though, it is not used in the Czech Republic. This is a consequence of the rivalries that continued after the death of Methodius. The situation worsened to the point that his followers fled to the Southern Balkans, where we will go next week for our final stage of this series on the Eastern Orthodox Church.