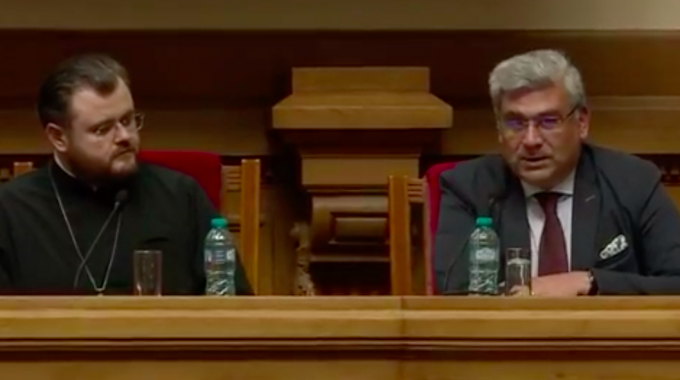 After the 1960s, the social identity of Christian communities was separated from traditional spirituality, nature was replaced by culture and the eschatological reading of history morphed into a progressive pursuit of earthly paradise.

Christianity became insulated from mainstream society, while its culturally ghettoised legacy was confined to history museums. Nowadays, most Europeans aspire to nothing more than a life of relative comfort, which, thanks to the tremendous progress that has been taking place in the medical field as well as the stability granted by the welfare state, has become commonplace. Generally speaking, Europeans identify as agnostics and would probably argue that the significance of Christianity within the modern world has become negligible. They also face new sources of anxiety, which include – but are not limited to – the disruptive potential of digitalisation, the fear of uncontrolled migration, the rise of populism, the uncertainty produced by climate change, and perhaps most importantly, the realization that planet Earth’s finite resources cannot fuel economic growth indefinitely. However, one thing is clear, Europeans have lost most of their metaphysical aspirations.

As European enlargement pursued its natural course and the EU welcomed the former members of the Eastern Bloc under its wing, the cultural rift separating Europe’s two fronts became more apparent. Since the nations that were freed from the shackles of Communism after 1989 had been forcefully homogenised under dictatorship, the discrepancy with their Western counterparts was only accentuated following their adherence to the E.U. Despite their genuine desire to become members of the European community, they defined their identity in relation to traditional Christian values. This is the reason why Pope John Paul II was so warmly welcomed in Romania, exactly two decades ago, and he urged Europe to breathe with ‘both of it lungs.’ It should, therefore, come to no surprise that the political relevance of religious discourse has reached its highest point in countries such as Poland or Hungary. Until the 2000s, the anti-Communist intellectual elite of new member states, who sought only to strengthen European unity, found a natural ally in the European People’s Party.

Today, however, religion has brought Eastern states (including Russia, where the Orthodox Church has become an instrument of power at the hands of the oligarchy) together, which in turn has accelerated the escalation of Euroscepticism and empowered critics that accused the West of forsaking its attachment to Christian identity and traditional values in favour of political correctness and an ideological commitment to the protection of minorities. The way in which the destinies of Western and Eastern Europe unfolded is somewhat surprising: those who were raised in the spirit of Marxist dialectical materialism are experiencing a revival of Christian nationalism, portraying themselves as defenders of Europe’s core legacies, while those who were raised in a context shaped by Christian-democracy are undergoing, well it’s too much to say a collective apostasy, but we are not so far from that.

While these conclusions are undeniably simplistic and perhaps exaggerated by social media and fake news, they hold true to some extent. For instance, it is a relatively well-established fact that the Judeo-Christian roots of the European project have not been acknowledged in the Treaty of Lisbon in order to avoid hurting the sensibilities of Europe’s Muslim communities. It is also true that cultural Neo-Marxism has taken hold of both Western university campuses and mass media, as liberal elites seem to feel, yet again, inhabited by the revolutionary spirit of 1789. Traumatized by their tragic experience of communist dictatorship, the most recent members of the EU have become wary of all things pertaining to revolution and supranational bureaucratic centralism. For this reason, Brexit has often been characterised as a legitimate, perhaps even desirable, political movement in the Eastern part of the continent.

This, however, begs the following question: will Brussels and the governments of the 27 member-states realise the importance of religious identity in bridging the cultural gap that is currently keeping the Western and Eastern halves of the EU apart? Former communist societies have been forcefully and radically secularized through the imposition of scientific atheism, which is a fundamental component of Marxist-Leninist doctrine. They now find the promise of European unity and democracy highly appealing, but are not willing to sacrifice the philosophical, spiritual, and ethical legacies of Christianity just for the sake of integration. Similar to the more conservative members of the Western bourgeoisie, these societies fear that their participation in the European project will never be complete as long as the EU limits itself to a currency, a single market, and an abundant number of supranational norms and regulations, which often times clash with local customs.

In order to avoid the instrumentalisation of these frustrations by anti-European populist movements, which tend to oscillate opportunistically between the left and the right extremes of the political spectrum, the EU need not punish member states, such as the UK for Brexit, or Poland and Hungary for their allegedly illiberal tendencies. Rather, the EU must acknowledge their grievances and temper its own penchant for postmodern nihilism and other potentially dangerous mantras, such as transhumanism.

We do not want another European civil war, which is why the exacerbation of nationalist sentiments should be firmly opposed; however, we do not want to be a part of a European community that renounces its Judeo-Christian identity and disregards its citizens’ desires to preserve their ways of life, traditions, and core values either. The only way to mitigate the populist threat is to ensure the Eurocratic elites are in touch with the real needs and demands of the electorates of each member state. Within this unique historical context, the Church plays a particularly important pedagogical role, namely ensuring that the Christian-democratic values of love, peace, solidarity, responsible freedom, and local autonomy are fully internalised, but also that the people’s right to affirm and defend their cultural identity is indeed protected. Perhaps this forum, which coincides with the Romanian presidency of the European Council, will succeed in formulating a call to action for a Europe that stays true to itself, in the same way in which a number of conservative intellectuals have done through the recent Paris Declaration.

Thank you for listening and I wish you a fruitful series of debates.

Is the West history?

For the first part of the article, click here. Interest in the link between religion…

Most christianised and most secularised

The second of the four European paradox addressed by Evert van de Poll. This is…

This weekend was the summer solstice. So now the days start to shorten and the…