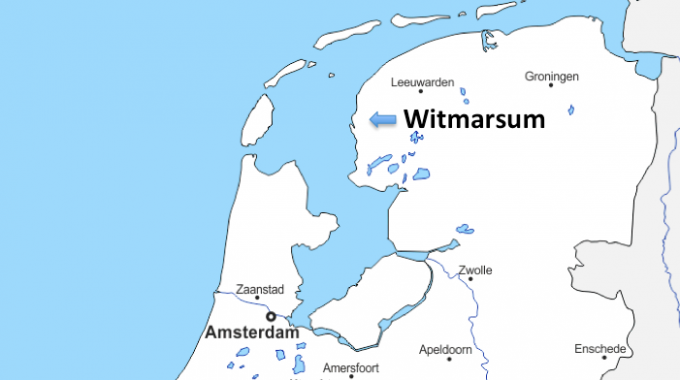 Today we are travelling to the Dutch province of Friesland, to a community called Witmarsum, in order to discover the early developments of one of the greatest church movements of the sixteenth century.

The village is located less than 10 km East from the Afsluitdijk, which is the longest dam in Europe (with its 32 km). It separates the North Sea from the former Zuiderzee (South Sea) which has become today a fresh water lake called the Ijsselmeer.

With a population under 2.000, Witmarsum is a small village made of red brick houses, tidy gardens and brick roads. The place we visit today lies a bit more than a kilometre east from the centre of the village. There we reach a dead-end road called It Fliet. Some meters before the end of the road, there is a narrow footpath on the right shielded by bushes. At the end of the footpath we find a monument in the form of an obelisk.

At its foot lie several inscriptions. On one side it is written: “In memory of Menno Simons, born at Witmarsum in 1496.” On another side, it is written: “According to tradition Menno preached to his first followers here”.

While we don’t know much about Menno’s youth or parents, much of what we know of him comes from a letter that he wrote to one of his fiercest local opponents, a Roman Catholic priest named Gellius Faber.

Menno Simons was trained to be a Catholic priest which was the only allowed expression of Christianity at his time. And at the age of 28, he became the vicar of the nearby parish of Pingjum. Nevertheless, in his letter, we find out that he had not yet read the Bible himself at that time:

“I had not touched (the Scriptures) in my life, for I feared if I should read them, I would be misled (on the supposition that the pope and the official representatives of the church alone are in a position to understand the Scriptures properly. Behold such an ignorant preacher I was for about two years.”

Soon however, his assumptions began to be rocked, as he wrote:

“In the first year thereafter, a thought occurred to me, as often as I had to do with the bread and wine in the Mass, that they are not the flesh and blood of the Lord. I considered this a suggestion of the devil who would rob me of my faith. I mentioned it often in the confessional, sighed and prayed, yet I could not be freed from this thought.”

And finally: “At length I resolved that I would give myself to reading the New Testament attentively”. Aided by the writings of Martin Luther, Menno Simons discovered that “transgressing the commandments of men cannot be the cause of eternal death. By the illumination and grace of the Lord I increased in knowledge of the Scriptures and was soon considered by a few, although undeservedly, an evangelical preacher.”

Some time later, Menno Simons’ heard of the beheading of a man called Snikke Snijder in Leeuwarden because he had been rebaptised as an adult. This man was an Anabaptist (meaning rebaptiser), a movement which had started in Switzerland some years before. Believing that infant baptism was unscriptural, the Anabaptists thus rebaptised believers as adults. This resulted in great persecutions at the hands of both Catholics and Reformed.

This event was one of the causes of Simons’ resignation as a priest some years later. Menno Simons was himself rebaptised probably here in Witmarsum, and became the pastor of a small group of Dutch Anabaptists. Finally, as persecution rose in the Netherlands, Simons headed to Northern Germany where he died at the age of 65.

The persecution that the Anabaptists faced was far beyond anything the Reformed had faced in the same period. Besides adult baptism, another reason for this was their opposition to state-churches, a principle that granted them less protection than the Lutherans in Germany or the Calvinists in Geneva.

While the Anabaptists were considered heretics by both Catholics and Reformed, many theologians of the time noted their incredible peace as they endured persecution. Could this be the reason why we find the mention of Hebrews 12:7 on the monument? The verse reads: “As you endure this divine discipline, remember that God is treating you as his own children. Who ever heard of a child who is never disciplined by its father?“

Finally, as we saw during stage 10, one of the particularities of the Mennonites was their development of communities in which they would live, work and worship together. Today, in a world of growing individualism, could their model be an inspiration for the Church?