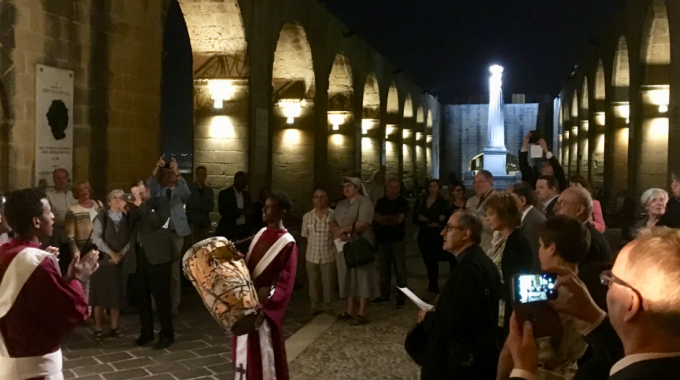 (For more information about the State of Europe Forum 2019, click here)

We, the undersigned, gathered in Valletta from a variety of faith communities across Europe, in commemoration of Europe Day and on the occasion of Malta’s presidency of the EU, respectfully urge our European and national leaders to remember and reaffirm the values and vision of Robert Schuman and other founding fathers of the European project, as first presented on May 9, 1950.

In their understanding, this vision for a community of peoples seeking the common good of Europe and humanity in general, had to be deeply rooted in the basic Christian values of human dignity, solidarity, equality and freedom.

•  Soul & Spirit
When we forget these values originate from faith in the Triune God, the ultimate Unity-with-diversity, the foundations of our common house are weakened against the external and internal threats facing us today. Lacking these roots, the dream of the European peoples being united in diversity could become a nightmare of self-seeking and competing nations, or of the powerful dominating the less powerful.

We ignore at our own peril the warnings of Robert Schuman and Jacques Delors, that without a soul the ‘game would be over’. Lacking spirituality and meaning, the ‘European values’ we profess are too often sacrificed for economic or political gain, at the cost of social inclusion and mutual flourishing.

We must heed Schuman’s exhortation to embrace the ‘spirit of Europe’, which is the acknowledgement of our common spiritual heritage and a consequent commitment to seek the common good.

• Justice & Compassion
When we make profits and technology ends in themselves, instead of tools for human flourishing, the gap between the haves and the have-nots widens and many feel discarded by the system.

Social discontent is feeding a negative populism and the re-emergence of those nationalistic forces which led to conflict in Europe’s troubled past. We ask you therefore to govern in justice and compassion on behalf of the children, the young, the unemployed, the vulnerable and the weak.

We remind those wanting to exclude ‘the other’ by citing our Christian heritage that the Christian faith is an invitation to all, based on grace. We entreat you as our leaders to recognise the dignity of all humans, not just Europeans, as made in the image of God; to pursue migration policies consistent with the values of solidarity, equality and freedom; to seek safe and legal pathways for migrants, and integration policies of dignity. Facing a demographic winter, we must recognise the benefits migration brings to receiving nations, as well as costs.

We urge a fairer sharing of the burden of migration across Europe, and also in the Middle East, whose share dwarfs that of our continent. We also plead for all means (including fairer trade) to be used to promote freer and more prosperous societies and nations in the Middle East, Central Asia and Africa.

We implore you as lawmakers to safeguard the family as the first school of learning in values and relationships, recognising the crippling costs to society of family breakdown and divorce, emotionally and economically.

We encourage the European Union to continue its global leadership on climate change and the stewardship of our planet’s resources, safeguarding the heritage of future generations.

• Salt & Light
We recognise however that the future of Europe is too important to leave to politicians alone. To expect politicians to restore a soul for Europe is unrealistic. We affirm a key role for civil society and faith communities in this task. We acknowledge that we in our faith communities have not always risen to this challenge. Often we were told we had no place in the public square. Too often we were content to remain in our comfort zones, disengaged from the responsibility to be ‘salt and light’ which Jesus of Nazareth gave his followers.

We ask you as our political leaders to recognise the legitimate contribution of faith communities to European life and culture; that separation of church and state does not exclude faith communities from public life; and that the faith-informed worldview has been crucial in the very development of democracy and politics in Europe’s past.

We have come to Malta to explore the meaning of this ‘salt and light’ commission today in a Europe seeking the way forward amidst the challenges of climate change, war and terrorism, migration and integration, human trafficking, populism and prejudice, unemployment and poverty.

We invite you to reflect with us on lessons Malta’s past may offer for Europe’s future, recognising that:
• crises can lead to blessing in God’s providence, as in the case of Paul’s shipwreck on this island;
• unity in diversity can prevail against overwhelming odds, as knights and peasants demonstrated during the Great Siege of 1565;
• and that faith, hope and charity are still our greatest defence against despair, cynicism and selfishness, as during the brave Maltese resistance of World War II.

We wish to partner with you as our political leaders in the task of promoting a Europe of hope, healing and hospitality, for the common good of all Europeans and all of humanity.

Signed: The State of Europe Forum participants, Valletta, Malta, May 8, 2017.

‘Stand up for Truth’