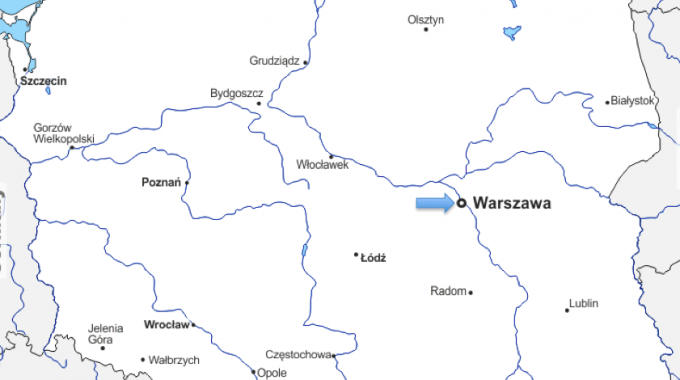 Today, we are visiting the capital of Poland, Warsaw.

There would be enough to explore in this 1400-year-old city for several days. The Palace Square, the Royal Castle, St. John’s cathedral or the Warsaw Barbican are just a few of the attractions that the city has to offer.

The place we are going to visit today is located a little less than a kilometre south from the old town. It is the Piłsudski Square. This square was named after Józef Piłsudski who had been the Chief of State of the Second Republic of Poland for a few months in 1930. The square has had other names as well, such as Saxon square before World War II, Adolf Hilter Platz during the Nazi occupation, and Victory Square after the war, in honor of the victory against the Nazis during World War II.

The square is made of concrete slabs. It is quite large and feels rather empty as well, except for the Tomb of the Unknown Soldier and a huge concrete cross.

The presence of the cross is a reminder of the famous homily of pope John Paul II on this square on the 2nd of June 1979 (which was exactly forty years ago this Sunday). Although it is less known to Western Europeans, this homily is now part of Poland’s national history.

After the death of pope John Paul I in 1978, Cardinal Karol Wojtyła became the first non-Italian pope after nearly five hundred years. The fact that he was Polish was even more striking at a time when his homeland was under communism.

During his first homily at St Peter’s Square in Rome in October 1978, pope John Paul II set the tone of his ministry by proclaiming “do not be afraid to welcome Christ and accept his power… do not be afraid, open wide the doors for Christ. To his saving power open the boundaries of States, economic and political systems, the vast fields of culture, civilization and development. Do not be afraid, Christ knows ‘what is in man’. He alone knows it”. His focus on Christ, his call to open the boundaries of states and his repeated call to not be afraid was a clear message sent to the people in his homeland.

Some months later, in 1979, pope John Paul II visited Poland for the first time since his election. This was also the first time that a pope was permitted to visit a communist country. One of his predecessors, Paul VI, had wished to do so in the 1960s but the authorities of the time had refused. The year 1979 was also the 900th anniversary of the death of Stanislaus of Krakow, a central figure to the Christianization of Poland, who had been martyred by King Bolesław the Bold.

While his visit to Poland included several places in the country, such as his native town Wadowice, it was his homily in Warsaw on the 2nd of June 1979 that left a mark in Polish history.

But what was it in his homily that so marked Poland?

At the eve of Pentecost, John Paul reminded the crowd gathered in Victory Square of the last words of Jesus: “Lo, I am with you always, to the close of the age” (Mt 28:20). Then he proclaimed that “The day of Pentecost is the birthday of the faith and of the Church in our land of Poland also. It is the proclamation of the mighty works of God in our Polish language also. It is the beginning of Christianity in the life of our nation also, in its history, its culture, its trials.”

John Paul went on: “Therefore Christ cannot be kept out of the history of man in any part of the globe, at any longitude or latitude of geography. The exclusion of Christ from the history of man is an act against man…It is impossible without Christ to understand and appraise the contribution of the Polish nation to the development of man and his humanity in the past and its contribution today also.”

His homily offered the Polish people a fresh view on life, a worldview that was totally different to the hopeless atheistic view of man as a mere part of the system.

But the crucial words of his homily came in his closing prayer, in which he said:

Among the people that had been touched by John Paul’s homily was an electrician from Gdansk called Lech Wałęsa. His fight for freedom through Solidarność, the trade union he began, contributed to the fall of Communism in 1989.

God did indeed answer John Paul II’s prayer. His Spirit has descended and has renewed the face of Poland. In today’s secularized Europe, let us pray those same words with the same passion.

https://soundcloud.com/aeuropeanjourney/a-european-journey-35-zulpich-germany In this episode we will finish this miniseries of five stages in which we…

https://soundcloud.com/aeuropeanjourney/a-european-journey-25-witmarsum-netherlands Menno Simons Today we are travelling to the Dutch province of Friesland, to a…