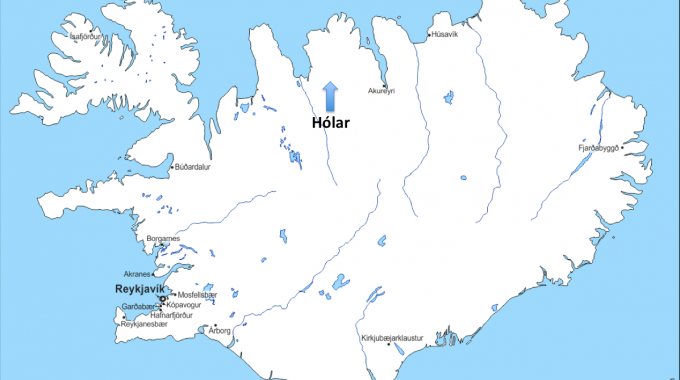 This week we will be visiting the nation of Iceland in the North-Western corner of Europe.

And to be precise, we will go to the Northern part of Iceland, to a place located more than three hundred kilometres from Reykjavik. To get there from the capital, we must take the road 76 which passes along the Skagafjörður bay. Then we must turn right to the Hólavegur road going inland in the Hjaldatur valley covered in green pastures and surrounded by rugged mountains with snowy tops.

Ten kilometres further down the road, we arrive in a small community called Hólar. The population of this place is less than a hundred and yet it has a church and even more surprisingly a university college just behind it. There is a third notable building in Holar as well: a wooden house with a typical Icelandic roof covered with turf.

So what does this place have to reveal to us?

Well, Hólar is the Icelandic equivalent of Wittenberg in the German Reformation or Geneva in the Calvinist Reformation.

But how did the Reformation reach such a faraway land? And why did Hólar become its centre?

When Martin Luther published his ninety-five theses in Wittenberg in 1517, the Reformation began and had a domino-effect which reached other European lands, such as the kingdoms of Denmark and of Sweden.

One of the aspects of the Reformation was obviously the recovery of the Gospel. But that was not all. Another aspect was the spread of education for all, rich and poor alike. While education had developed for several centuries, thanks to the Catholic church (not only religious education!), it had been mainly available for the higher social class.

This inspired the Danish king Christian III to make education available to all also in Iceland, which was then under the Danish crown. Nevertheless, because of a lack of funding, it took ten years before the first school was opened. And as you may have already guessed, it was right here in Hólar in 1552. This small community became the heart of the Reformation in Iceland. Several prominent people were educated in this place. One of them was Guðbrandur Þorláksson (Gudbrandur Thorlaksson).

This man was the son of a former priest in HólarCathedral. Because of this Gudbrandur had received his education in the cathedral school. After that, he travelled across the sea to study at the University of Copenhagen. Aiming to walk in his father’s footsteps, Thorlaksson mainly studied theology, but he also read mathematics, geography and astronomy.

When he returned to Iceland in 1564, Thorlaksson was appointed rector of the Skálholt Cathedral School in the Southwest. He was thus the first Icelander ever to be given such a role. This was in itself a testimony to the change that education had brought to the people of Iceland. Thorlaksson not only taught theology to his pupils, but he also taught science.

Later on Thorlaksson became a minister, andfinally even the Lutheran Bishop of Iceland, a position which he held until his death in 1627. And his bishop’s office was here in Hólar, where we have its replica still today.

His most famous work was the translation of the Bible into Icelandic in 1584. In addition to this, he wrote more than eighty books. But what is even more remarkable with Thorlaksson’s work is that he was not limited to religion only. He was, in fact, the first to correctly measure the latitudes of any given place in Iceland. He then made a new world map on which Iceland was rightly positioned at last. Thorlaksson even led an expedition which resulted in the discovery of the Isle of Kolbeynsey, which is situated north of the mainland.

Thorlaksson also encouraged his fellow countrymen to write books about Iceland in Latin. This would allow foreigners to read them and could therefore correct their misconceptions about Iceland. All in all, Thorlaksson was a key figure for the development of the academic world of Iceland. Also, many Icelanders believe that Thorlaksson saved their language from a sure death.

To the modern man, Thorlaksson’s life might sound surprisingly varied. Today Christianity is often isolated from other spheres of knowledge. It is rare today to find a scientist-theologian. Nevertheless, before the rise of the Enlightenment, the development of all disciplines was fuelled by a Biblical worldview. Thorlaksson understood that God created the world and that he gave it to man to fill it and care for it. This was what fuelled his passion for geography, for literature and for education in a general sense.

And most of it began here, in this tiny community of Hólar.