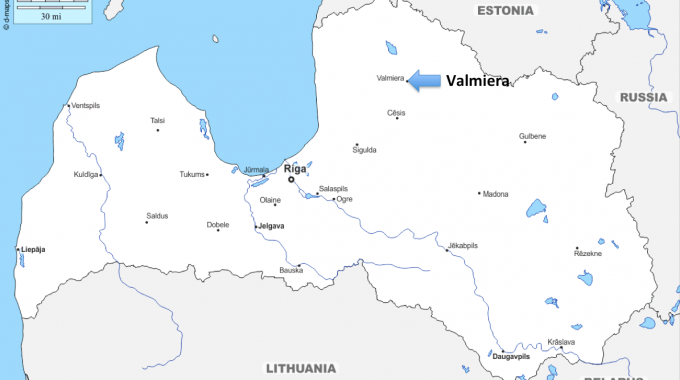 Today we are going to a corner of Europe that we haven’t visited yet. I am talking about the Baltic lands, and in particular Latvia. We will specifically go 100 km North East from the capital Riga, through the Gauja National Park and arrive in the town of Valmiera.

The city centre is crossed by the Gauja river and its many parks and old wooden houses give a special beauty to the city. Actually the city is a candidate (among 20 others) for the European Green Leaf Award 2021 which rewards the most environmentally friendly town with a population between 20.000 and 100.000 inhabitants. The results will be known in April.

But for our purposes, we will walk around 3 km North-East. As we reach a big roundabout, we’ll turn left on the main road and then right a hundred meters later, to the ruins of a castle. The place is called Valmiermuiza and to be correct, it is not situated on the territory of Valmiera anymore, but on the land of the neighbouring municipality of Burtnieki.

The ruins of Valmiermuiza once had a German name: Wollmarshof. It reminds us that Livonia (today’s Estonia and Latvia) was controlled by the German nobility for centuries. These people had mainly been Catholics before adopting the Reformation in the sixteenth century.

The Gospel didn’t bring much transformation to the indigenous people of Livonia, that is the Estonians, the Latvians and the Lives. Part of the reason was that their local languages were never really adopted by the nobles. As a consequence, the peoples of Livonia kept their pagan practices for many centuries even though they had officially converted to Catholicism.

Nevertheless, a change began to occur in the 18thcentury. This was the century of the Great Northern War between Sweden and Russia. Latvia and Estonia had suffered greatly. However, the Pietistic movement began to arise in Germany. It placed an emphasis on personal transformation through new life and spiritual renewal. And soon it started to attract German nobles in Livonia. The Pietistic teachings in turn slowly opened their eyes and hearts on the disastrous conditions of the indigenous populations.

One of the prominent adherents to pietism was Count Ludwig von Zinzendorf. As a young adult he opened his estate in Berthelsdorf (near Zittau, Germany) to a group of Moravian refugees fleeing the persecution at the hands of the Roman Catholics in modern-day Czech Republic. Later on a revival sprang up. It was fuelled by a continuous prayer meeting which lasted 125 years! Later the estate was renamed Herrnhut (the Lord’s watch). This revival gave way to one of the greatest missionary endeavours of history as the small community sent people to faraway lands such as Japan, Greenland, the Caribbean or Tanzania, to name but a few.

Having heard about all of this, Countess von Hallert who was the widow of the local general living in this castle, and who had also been impacted by the Pietistic movement, invited Count von Zinzendorf for a visit. Her intention was to ask him to start a seminary in Livonia. Zinzendorf accepted the invitation. And so he left Herrnhut on the 27thof July 1736 and travelled through Magdeburg, Berlin, Königsberg (today Kaliningrad) and Riga before finally reaching the General’s manor where he stayed for a nine days.

After continuing his mission trip to Estonia, he returned on his way back to Wollmar. This time he stayed a little while longer and gave a report of his mission, explaining how the dignitaries of the Livonian (Lutheran) Church received his message positively and several of them even“fell upon his neck, and made (…) confession with a deeply affected heart, and with many tears.” (The life of Count Zinzendorf, A.G. Spangenberg, p.252)

Zinzendorf realised that what was really needed were missionaries who would come and preach the Gospel in a simple way to the Estonians and the Latvians.

And so, during the next years the first missionaries came from Herrnhut. They considered that it was up to them to learn the indigenous language and not the other way round. So these missionaries endeavoured to learn the Latvian and Estonian languages.

Their work triggered an unprecedented revival among the people. Attracted by the simplicity and openness of the German missionaries, thousands converted to Christ. Around 1850, nearly 300 prayer houses had been built in Livonia. These attracted more than 80.000 souls to the Moravian movement.

Moreover, the Moravians started building schools, thus offering local people access to education. Those who had found a living faith in God abandoned alcoholism and all kinds of depravation for a more disciplined life. Echoes of this revival even reached the Russian tsar of the time, Nicholas the 1st, who was then controlling the territory.

As education was now available to the Latvians and Estonians, the economic conditions of the land improved greatly. This also paved the way to the National Awakening movements of the 19thcentury, which in turn opened the doors for the independences of both nations in 1918.

There is no doubt that without the influence of the Moravians, neither Latvia nor Estonia would have celebrated their 100thanniversary in 2018. And all of this began through a meeting between Count von Zinzendorf and Countess von Hallert right here in Valmiermuiza.