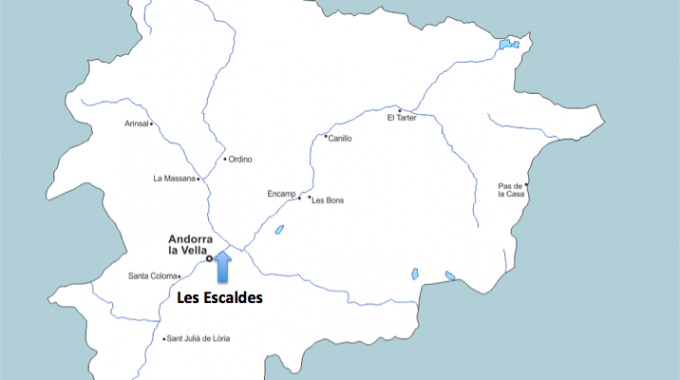 After Sweden, we’re going down south to a very small country in the middle of the Pyrenees between France and Spain. It is the Principality of Andorra. We’ll be in Les Escaldes, a little place at a walking distance from the capital, Andorra la Vella.

The main street of Les Escaldes is the Avinguda Carlemany. As is the case in many other towns in Europe, this is a pedestrian commercial street. And on that road, you can find a shopping mall, a hotel, a pharmacy or even a dental clinic bearing the name Carlemany.

Well, as you might have guessed, Carlemany is simply the Catalan translation for Charlemagne. While his name can be found in numerous avenues or squares around Western Europe, it carries right here a particular meaning for Andorra, and also for the whole continent.

In the late 5th century, The Western Roman Empire fell at the hands of those the Romans called Barbarians. These were mainly Germanic tribes coming from Eastern Europe. One of these tribes was the Visigoths who settled in the Iberian peninsula, that is modern-day Spain and Portugal. Thanks to early efforts of evangelization (e.g. through Ulfilas), they had quickly turned to Christianity. And so they established their Christian kingdom in the Iberian peninsula.

150 years later, Islam arose in modern-day Saudi Arabia. Its adherents quickly spread their dominion in many directions until they finally reached the South of Spain in the beginning of the 8th century. And that was a bad moment for the Visigoths to face an external threat, as they were also facing internal political turmoil at the time.

Later, the Muslims, who were called Moors, defeated the army of the Visigoths at the river Guadalete near Jerez de la Frontera (Andalucia). This battle probably claimed the life of their king Roderick. The Iberian peninsula was left without defense and the Moors quickly spread through the land.

In the North of the Peninsula, the Catalans heard what was happening. Some of them fled for their lives to the Pyrenean mountains and ended up at the springs of the Valira river, where we are today. Initially this place was not very safe, because the Moors who had even crossed the Pyrenees to modern-day France were surrounding them.

Nevertheless, the tide started to turn during the famous battle of Poitiers (France). That’s when the Frankish army led by Charles Martel defeated the Moors. However, the Franks who had also turned to Christianity some centuries before, needed two more generations to overcome the Moors. And it was under the leadership of Charlemagne and his son Louis the Pious that the Pyrenees were finally pacified at the end of the 8thcentury.

It is believed that Charlemagne himself gave the name Andorrato the valleys where the Catalan refugees had fled. He named it after Endor, found in the biblical book of Judges, where Barak and Deborah defeated the enemies of Israel (Judges 4-5). It is also believed that he granted Andorra greater freedom in gratitude for their services during the battles. This is probably the reason behind its current state of independence.

And this brings me to the second reason we are exploring Avinguda Carlemany.

The battles that took place in the Pyrenees were not simply wars between different tribes. They were wars between religious groups. While this might be difficult for our modern minds to accept, we need to remember that for most of human history, religion had always been the core of the nations upon which everything was built.

So the Moors fought to expand the Islamic dominion in Europe. The Franks and the Visigoths instead fought to defend what became known as Christendom, the lands where Christianity was the core worldview.

And it was in some of the chronicles of these battles that the name Europeans appeared for the first time. From that time on, being European came to mean being Christian. And thus Europe came to mean the land of the Christians. It was this different worldview that made Europe so distinct that it came to be seen as a continent.

For geographically speaking a continent is defined as a big landmass mainly surrounded by water and obviously on this basis Europe should not even be considered a continent. And yet we call Europe – and not Eurasia – a continent, even The Continent, as if it were the primary one.

These two examples show how both Andorra and Europe received their names because of the influence of the Gospel in our lands.

Nevertheless for a little over two centuries now, Europe has been moving away from its own cornerstone. What consequence will this bring to Europe? Can it keep its identity? Can it preserve all the fruits that the Gospel has brought to each sphere of life?

I will be exploring this in stage 6 of A European Journey.