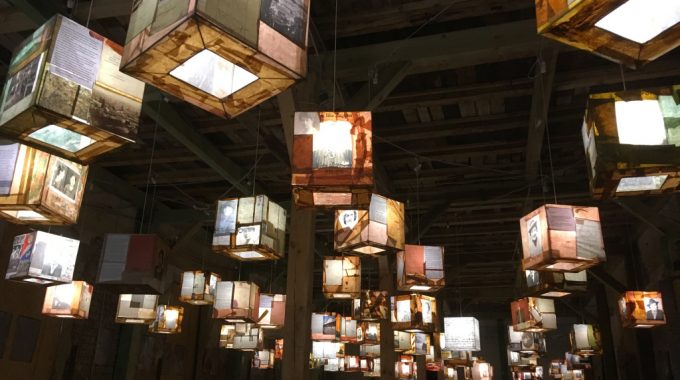 I have wanted to write this for a while but kept postponing… and tried to understand why?! One of the simple explanations is that it is extremely difficult to write about national shame, inhumane ideologies, ordinary people with extraordinary hatred or indifference. It is difficult to say something about all of this without too many cliches, too much moralizing and too little personal reflection. But I will try to put my finger on a few very important and timely things…

November 30 is coming up and in Latvia it marks another remembrance day – the mass killings of Jewish people on November 30, 1941 in Rumbula forest near Riga. I don’t want to give the facts and statistics of how it happened or how many thousands got killed. There is plenty of information available online, plus I have written before how we as a society in Latvia are still in the process of talking about, reflecting upon and learning from these very painful and shameful events of our past.

In many ways here in Latvia we are on a very steep curve of learning and remembering while it seems that many people in Europe and around the world are on the downhill slope of unlearning and forgetting. Of course, not everyone in Latvia wants to know, to understand and to change their views or assumptions, but it is getting harder and harder to ignore it. There are more museums, more books, more media attention, more and more people who care to know.

This year we even have the first Latvian feature film about the Holocaust in Latvia which tells the true story of one amazing family, Lipke, in Riga who risked their lives to save more than 50 Latvian Jews during WWII. There were many others who were rescuers but Lipke family has their own unique story. (The English title of this new movie is “The Mover“)

So, the movie is in the theaters, the remembrance day and lighting the candles at Freedom Monument takes place on November 30… meanwhile I turn on the news and watch programs about the rise of new kind of antisemitism in Europe and elsewhere. It is on the far-right and the far-left and many shades of it in-between. And I ask myself what is going on?!

The experts – sociologists, psychologists, political analysts, historians, journalists, etc. – have their own wise explanations and we can easily find the research and survey data. But what does it tell me personally? For one, it tells that we live in a very fragile time filled with so much anxiety where many of the old mechanisms of dealing with insecurity, instability, rapid global technological and cultural change are being used. One of the classical methods is finding the scapegoat whom to blame for everything. “The Jew” is just so familiar and easy to revert to, but it can be “the Muslim”, “the Russian”, ” the immigrant”, “the black”, “the Mexican”, “the Christian”…

That is why I think antisemitism is also on the rise in those countries where the governing parties are very pro-Israel but very prejudiced against many different groups of people. In this sense any rise of nationalism is a rise of antisemitism. When we talk about ‘making our countries great again’ by which people often mean going back to some kind of ‘ideal’ past and ‘romanticized’ cultural identity we used to have, we are already on this downward slope. It is a whole package where it is very hard to pick and choose our prejudices for this kind of pride comes with strings attached.

The experts mention that many people would be classified as ‘antisemitic’ because they hate the policies of the current state of Israel, especially toward the Palestinian people. I do not support this hatred in any way. Still,  I understand a little bit about not liking a certain countries policies and the struggle to separate the issue. For example, I have many negative feelings and strong opinions about the current politics, ideologies and state of affairs in Russia and it is not easy for me to look at the Russian flag as something neutral or accept people who are very proudly Russian and nationalistic. I immediately start wondering if they support Putin or “Make Russia great again” which would put them in the ” other” camp. Some years ago I would have never imagined that my generation will have to have these inner struggles again of how to love the Russian people from our neighboring country while strongly opposing that country’s political direction.

I am very concerned that we forget so quickly… we forget the Holocaust, we forget Rwanda, we forget Cambodia, we forget the Apartheid.. We forget that every generation has their own ‘demons’ to face which often try to appear as the ‘angels’ or ‘idols’ of ethnic, religious, racial or national identity, infallibility, stability and self-protection…

As we continue to pray in our own brokenness: “lead us not into temptation and deliver us from evil…”

So, the Brexit argument is going to drag on for another six months – to…