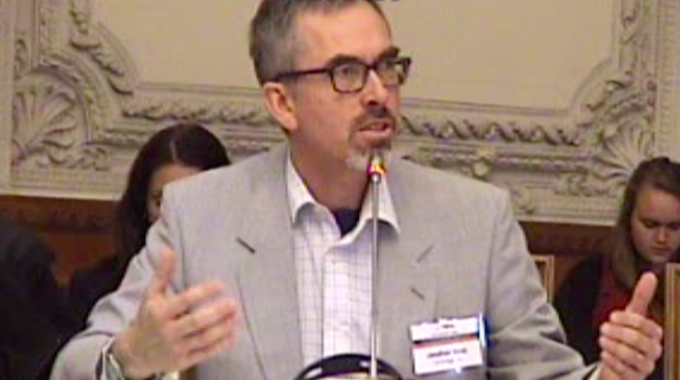 In recent years, many European nations have experienced a hardening of the political debate. In this context, how can the Church bring a positive contribution? Jonathan Tame from the Jubilee Centre gave his perspective during the State of Europe Forum 2019 in Bucharest.

I am from Britain but I have lived 11 years in Romania, and something very valuable I learned while living in Iasi, when I was invited to speak on a radio station. It was the first time I’d ever done a radio interview.

It was on a weekly program where there was an Orthodox priest, a Catholic priest, and a Baptist leader. They met every week and they talked about what was going on in the church in the city. And I was invited onto that program as a newbie in the city of Iasi. Afterwards I asked: ‘How is it that you three are able to have such good relationships and to have this conversation every week?’ I’ll never forget the principle that was explained to me. And I think it was the Baptist, Danat Manastireanu, who said: ‘Well, when it comes to our different denominations, in order to enter into this ecumenical dialogue, it’s very important that we are secure in our own identity, that we accept who we are with all the positives and negatives of what that is.’ And then he said: ‘And secondly, when we are to have a conversation together, what we always do is only to seek to criticise our own tradition and always to look to affirm the tradition of the other.’

That is very wise and I’ve taken that with me and shared that with many other people since then. And I think it’s an important principle that we can also bring into this question of: How do we deal with similarities and differences? How do we actually work out this unity in diversity question? Because I believe if we can work it out in the church, then we have something to offer to the nation, to the wider society.

This idea of affirming the good of others is something which reflects Jesus’ teaching on the Sermon on the Mount in Matthew 5 where he says: ‘You are the salt of the earth.’ We have reflected a lot on that in the Jubilee Centre recently. The three uses of salt in first century Palestine were firstly, to preserve meat and fish to stop it going off; secondly, as a flavouring; and thirdly, as an antiseptic to heal wounds. We thought about how is the church supposed to enact those things then and now. Of course, the first is to try and stop decay and corruption, whether that’s in spiritual, moral, economic, social areas and the church is often good at pointing out where that corruption and sin is taking place. The second thing, the idea of adding flavour, of enhancing, like salt brings out the flavour of food, the people of God are supposed to affirm what is good. We have a calling to affirm what is good in the society around us. And often the church is seen as only being against certain things in society but when we can affirm the positive and acknowledge where the image of God or the wisdom of God is being expressed in different ways, that can be very positive. So those are just some thoughts around how we, as the church, can help to bring an influence.

Secondly, let me say something about Brexit. There has been a change in the Brexit narrative. The first narrative of the last two years was that the decision which has shocked everyone when Britain voted to leave the European Union. In a sense, there were no simple answers for it; it was a complex set of different reasons. On the one hand, there was this long held scepticism towards Europe which was not helped at all by British politicians who were always blaming the bad things on Brussels and the good things coming out of Europe, they said: ‘Well, that was our contribution, we did all the good stuff and the others did all the bad stuff’. That was combined with this disaffection of a lot of people away from the Southeast of Britain, people in the North or other areas which had lost out of the globalisation. They voted together against remaining in the EU.

The second kind of Brexit narrative which has been growing strength just in the last few months is that as the government has failed to negotiate a successful departure from the European Union and the two years that was stipulated in Article 50, saying that once that’s triggered, you must leave within two years; it is now being seen as a failure of the political class and there’s a new kind of populism, far more rampant or dangerous perhaps than the populism which contributed to the vote two years ago. And that is where Nigel Farage, an MEP and one of the key figures in the movement to leave the European Union, is starting to use the language he has borrowed from Trump and from the populist movement in the States and says: ‘You cannot trust the elites at all. They are traitors to the country. They have failed us. We need a new kind of politician, we need a new kind of political leader.’ So in Farage’s rallies, when he mentions Theresa May, a few people start to shout: ‘Lock her up!’ Now where does that phrase come from? You know, it’s from Trump’s rallies when he mentions Hilllary Clinton. So we’re seeing, in a sense, this infectious influence, perhaps, coming from populism of the USA. And I fear there’s a real danger that Britain will get more and more vulnerable to populism in the months ahead.

My last point, we mentioned the Notre Dame fire. Fire can very quickly destroy something that has taken decades to build. In some ways populism, I think, is a bit like a fire and there are three ways to put out a fire. Firstly, you can try and throw something at it that will douse the flames. Secondly, you can try and take away the oxygen from the fire. Or thirdly, you remove the fuel. Now, when you try and throw something at populist arguments, often they will just be rejected. We have seen how all the experts are brought up to counsel some of the arguments put forward by the populists, even though they are absolutely sensible, practical, empirical, and so on, they are often just rejected. So trying to put out some of the fires of populist arguments with good, sound rational thinking just doesn’t work. Secondly, you can try and remove the oxygen, the oxygen of publicity when mass media was much more focused on a few organisations, it was possible to do that. In the world of social media now, it’s almost impossible to take that away. So lastly, how can perhaps the fuel be taken away from populism? Even if there’s a lot of exaggeration and fake news and so on, the fuel of populism often lies in some legitimate grievances. And that is the area where I think that we need perhaps the contribution of the church most of all. It is to go and get alongside; to understand those legitimate grievances and tell a different story, tell a different narrative, a positive one, one that is rooted in the Christian tradition of loving your neighbour as yourself. And that’s a little bit of what I think we should be contributing as a church to this debate.

On Europe Day, May 9, 2010, at the commemoration service in the Chapel of the…

TV News report of the State of Europe Forum