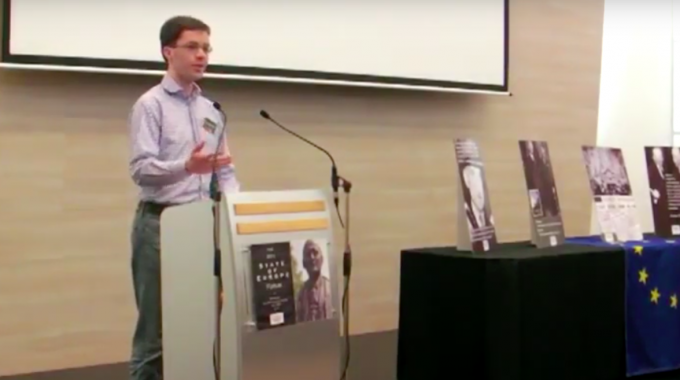 Several fathers of the European Union were motivated by their Christian faith. Together they wanted a Europe rooted in the ideal of common interest. But with time, this view has nearly disappeared. In these videos, Dutch philosopher Sander Luitwieler explains that Christianity is the only way for the European Union to recover this ideal.

Speech given during the State of Europe Forum in Budapest (May 9th, 2011)

Robert Schuman’s quest for the common interest was based on an awareness of shared values. If and when we go back to these out of love for others and out of a hope for a better world, Europe may look at its future expectantly.

Today is the 9th of May. This is our day. We should be happy about this. We remember in 1950 when the French minister of foreign affairs Robert Schuman expressed the declaration that forms the basis for the current European Union. In his declaration, Schuman proposed to place the Franco-German production of coal and steel under a common authority so that any war between the two countries would not only become unthinkable but also materially impossible. Italy and the Benelux countries joined in this effort which resulted in the European Community of Coal and Steel in 1951.

Schuman and the other founding fathers of the European Union were driven by idealism and the quest for common interest. This is not say that the national interest had no role to play. On the contrary the European integration process enabled the member states to recover economically and politically in the aftermath of the Second World War. They were well aware of this. Yet at the start of the integration process, idealism and national interests did not exclude but rather they coincided with one another. The European common interest corresponded with national interest.

Loss of the early idealism

At the moment the situation is completely different. Schuman’s idealism and quest for common interest has faded away. National interests predominate. For example, in the Euro crisis, many European politicians and citizens turn away from the weak members of the Eurozone, to the extent that, if politicians really help them, this is mainly out of self-interest. We see it with Greece, Portugal or Ireland. We see it also in other areas such as with the immigration policy. France and Italy have proposed to reintroduce border controls to protect themselves from African refugees while other member states look the other way. This is all the more painful in the light of the special responsibility of Europe towards Africa that Schuman saw in his declaration.

So while national interest may have been important for the beginning, without realisation of common interest, the European integration process has no future. This is the rationale of the European project. If each man looks only at himself, there is in the end no reason to look at the other, let alone take care for the other. The way the European Union deals with the weak within and outside its borders is therefore two testersfor the European project.

Back to our common values

So how can this common interest be again placed on the forefront? I believe that it is by going back to our common values on which the common interest can be based. Various traditions have contributed to European culture, in particular the Greco-Roman culture, Christianity, Humanism (with a capital H) and the Enlightenment. Although the labels used are different in some cases, these traditions gave rise to a number of common values.

I think that there are five of them: freedom, equality, justice, community and diversity. Although the question may be raised whether these values are specifically European, perhaps in combination they are, these are in any case values of Europe. And as appears in his writings, Robert Schuman was very well aware of these values and of their Christian roots. Besides, they have got an increasingly prominent position in the consecutive European treaties and they are also featured prominently in the Charter of Fundamental Rights of the European Union.

But I think that the crucial question is: in which way are these values interpreted and put into practice? The various traditions, for the greater part, share the same values but apply them in a different way. And this is dependent on one’s view of man. The Enlightenment as well as Romanticism have contributed to the emergence of the modern individualistic view of man. This view of man has found broader acceptance ever since the end of the 1960s. It considers man as an autonomous being that does not need God or others to be himself. Instead of to God, man devoted life to other authorities or gods. And the ‘I’ has taken the place of others.

Facing the individualistic view of man

Now Christianity faces this prevailing individualistic view of man with a relational view of man. God’s love for us forms the basis. God is relational on the inside. God is love and He consists of Three Persons, Father, Son and the Holy Spirit, forming a community that perfectly expresses that love. Man is created in the image of God. Just as God, man is a relational being. This relationality has both a vertical and a horizontal dimension. This is expressed in the two great commandments: “Love the Lord your God with all your heart, with all your soul, with all your mind and love your neighbour as yourself” (Luke 10:27).

As a response to God’s love, we are able to love God, our fellow men and creation. We are and become ourselves within loving relationships with others. The image of God expresses itself in these three relations, being a child of God, a neighbour to our fellow men and a lord over creation. Our relation to creation can be seen as a derivation from our vertical relation with God and our horizontal relation with other human beings. The three relations are part ofbeing human. Through developing these three relations, we become fully human, finding a good life.

This approach aims at the common European, even global interests, out of love for others and hope for a better world. And this common interest could be based on the five common values that we have discussed. Approaching the European Union as a community of values, rather than a community of interests, may strengthen the identification of citizens with the European project, and with that the legitimacy of it. If and when these values are interpreted and put into practice from a relational perspective, there is hope for Europe.

During the State of Europe Forum 2011 in Budapest (Hungary), Dr. Os Guinness explained why…

Populism vs. Political Correctness (Bucharest, May 2019)

Generally speaking, populist parties are noticeable because they break the rules of political correctness. But…