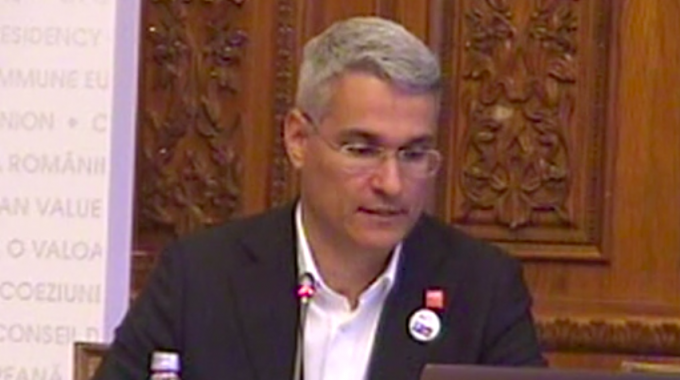 The declaration of the current European Summit in Sibiu starts by saying: “we will defend one Europe”. And then it adds that, from east to west, from north to south, there is no place for divisions that work against our collective interest.[1]

That is a good start for our discussion here. The Sibiu declaration has been launched in a difficult moment for Europe as a whole. We are at a crossroads, where the emergence of populism and nationalism have eroded already the foundations of Europe, and Brexit is maybe its most important example. So, at dire times, when the tensions among us are actually reaching heights that we have not foreseen before, I see no better basis to go back to our faith and see what we can do about those foundations and about the vision that our founding fathers of the European Union have actually placed more than half a century ago.

My first message would be one of unity. It is centred especially on the east and west part. As a young politician, not necessarily for my age, but in terms of being in politics for just a couple of months, I am concerned about this relation between east and west. We, as the Alliance 2020 USR PLUS, we have also launched a manifesto for the vision on Europe. We also emphasised in quite clear terms that we would like on union from east to west.

Now, there is a tradition to discuss in terms of east versus west. This tradition relies on the works of eminent philosophers such as Arnold Toynbee, who has been writing about ‘East to West: A Journey Around the World’, in the beginning of the 20th century. Then there were Max Weber, Thomas Kuhn, and more recently Samuel Huntington. Quite interestingly, all these were writers have tried to look at the things that differentiate the west and the east – the west and the rest as a general paradigm – but west and east as an example of how things are different.

So if we are to be looking at the arguments that have been put forward by different writers on the east versus west, it is interesting that indeed comparisons in between, or referring to the facts that, say the Christian Orthodox part of Europe are, more or less, in much higher poverty, to put it this way, than their western colleagues in Europe, have suggested that there might a question of the way of living and organising the society. These inferences have actually been quite damaging to the perspective of unity at the European level. There still is, to some extent, a treatment from the west towards the east of belittling the kind of historical struggles that we have been through. It is quite important to understand that in the eastern, south-eastern and central part of Europe, we feel that as Europeans, as any other people in the European Union. We feel that we fought for our history and our lives in a way in which we have been very keen for the values that are promoted right now for the European level.

It is difficult for us to look at the nowadays construction of Europe and see terms like social dumping, for instance, used when we are talking about economic and labour mobility, because it somehow suggests that there is an economic warfare between the eastern part of Europe that would like, and aspires to, a better life and the western parts of Europe that would need to conserve their level of development detrimental again to the mobility and access to opportunities for people in the east. These one sided views are affecting quite a lot what is happening in the elections throughout Europe as well because that’s a part of the basis of nationalism and populism. So to look for a menace that aims to divide us and the others, to find an enemy, an imaginary enemy, that is right now what identity politics is about. We are facing that all over Europe right now and we need to respond to that. And the response to that would be to understand that the European Union is about access and opportunity. It is about the strength that comes from our diversity.

Tradition is not underdevelopment, it’s not going back to the stone age. Tradition is about respecting the Christian values, respecting the family, being tolerant and kind to one another. So tradition is very much about understanding what are the pillars of the society. Coining people that respect tradition that they are somewhere lost in history is not necessarily a good thing. The good thing would be to actually embed the tradition that has been preserved in the construction of Europe in the future, to cherish the fact that we do have people that are preserving tradition and who work together with people that, based on their free will that God has allowed us, have chosen other things.

We need to be tolerant but at the same time, the kind of freedom that is associated with tolerance and the freedom to associate yourself with whoever you want should not be detrimental to the freedom of faith, the freedom to believe in the religion that you want.

Romania has been recently affected by false cleavagesof the society. We had a referendum on family, and I think that after this, there are still wounds in Romanian society. I think that there will be many Christians that will be opposing the use of this kind of political means to divide the society more. I think that there is nowhere in the Gospel written that politics should be using Christianity and its values to actually create conflict and divisions in society.

The two things that I was mentioning before, that we can live without any problem with these two things together: the tolerance and the freedom to believe, that is faith. So we don’t need the kind of divisions that we’ve been facing in Romanian society.

As a father of four sons, I am actually quite happy we can open a kindergarten together with Mrs. Cherecheş. I am also very preoccupied about the future of Romanian society and the future of Europe as a whole.

I would like to finish with this pledge for kindness, for tolerance and for the good of the people. I think again that it is our choice to look and discover how we are different. We could use that to flatter ourselves, to believe that we are superior or inferior, that we are more economic, better off or not. We could play with our findings for the benefit of our ego. But we could better use it for the benefit of others. The choice in the future is to go back to the foundations, to go back to the values that have built Europe as we know it today, to focus more on the things that are uniting us, to discover again compassion to the ones that are in need, without necessarily forcing others to redistribute.

[1]The European Summit in Sibiu (Romania) was held on May 9th2019 and gathered national leaders from across the European Union to discuss about the future of Europe.

Must the Sun Set On The West?

Dr Vishal Mangalwadi spoke on 'Must the sun set on the West?' at Christ Church in…

Generally speaking, populist parties are noticeable because they break the rules of political correctness. But…