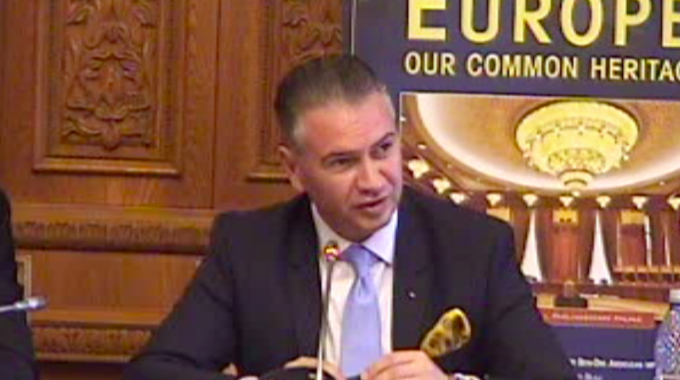 Generally speaking, populist parties are noticeable because they break the rules of political correctness. But what is political correctness? Is there anything wrong with it? Romanian MP Ben-Oni Ardelean gives his perspective in this video from the State of Europe Forum in Bucharest (May 2019)

I would like to bring some theoretical assumptions regarding populism. First of all, let me say that populism has always existed so this is not a new contemporary issue.

Populism had to do always with common good because all the populists had claimed the common good to be the desire of their life and the thing that they want to stress for society and to have a better life.

We used to live for many years in a divisive society. People were discriminated because of their colour, their sexual orientation, their religion, their political orientation as well and you name it. The leaders of the society decided to take some actions for that. So they started a lot of processes for non-discriminations. Finally, without going into too much details, this very interesting process ended up with political correctness. That process created a kind of levelling of discourse at the EU level, but also at the international level as well as in all the democratic countries. Everyone was speaking the same language. It didn’t matter from what side of political arena it was, whether it was left or it was right, they all had about the same words in order to not discriminate.

For a while, this was a good thing because it was somehow levelling the discrimination and the division in society. But that created furthermore, not only a plain and levelled discourse but a levelling leadership as well. So it didn’t matter what side of the political arena one came from, people were looking at those political leaders mainly, and religious leaders as well, and they were seeing the same type of men and the same type of women. And they didn’t make any differentiations between those people. So this type of levelling is a type of uniformism. All of us who lived under communism know what uniformism in a society means. It created the perfect arena for extremism and populism, because some of those leaders who didn’t want to fit into this new uniformism started to say whatever they think, whatever they believe. Some of them expressed their own identity, and this is what we stress in society, that each member of society should preserve, believe and express his identity, and have a perfect arena in public life to express it.

Well, here started what I call the troubled point in society, because this is the perfect field for a new type of extremism, for a new type of populism in society. And here are the risks of society: we can look through many election campaigns, but I’ll just take the US elections and the administration of Trump as an example. When Donald Trump came in the arena, and named things that he believed in, people got very mad at his affirmations. This break into the political correctness is actually good in a way because it expresses our identity, but on the other hand, it is the perfect field for extremism.

And before I’m getting to some solutions on that, I’d like to make some remarks on common good. What is the common good? Our societies years ago believed that there is only one truth and there was no question mark on that. And then a process started a process, with the Protestant reform actually, which questioned the truth somehow. Then it started to neglect, negotiate or get into a dialogue about the truth. And right now, the truth has to be put into perspective.

The same thing happened with the common good. In Romania we don’t necessarily have post-modernism, except in some large urban areas. So in the Romanian political arena, when we negotiate, we still know the rules and the existential matters. But the Western part of Europe is dominated by post-modernism.

I think that it is important to know that in post-modernism, good is for yourself. I mean, my good might not be the other’s good. So the common good has to be negotiated. As an example, Ravi Zacharias was once speaking in a university setting. At the end one student came to him and said ‘You know, I don’t agree with you at all’. Zacharias said ‘It’s okay, no problem if you don’t agree with me. Let’s talk about this issue: if I take a newborn child, and I cut him into pieces, would you like it or not?’ And the student answered: ‘I would not like it but I cannot disagree with others that like it’. So here, we got the matter that my good is different than the good of everyone else’s good.

So we have to find a common way of looking at good, at truth, at some of the values in society. The solution is that if you take all the ethical codes in the world and you overlap them, the only thing that stands in all cases is human dignity. Nothing else. So we have to build on that, we have to look at us as humans, people created in God’s image. We have to build from that and find out which is the perfect setting for our identity, how we can preserve it, believe in it, and express it in the public life. And I think we all should work together, politicians or non-politicians in this arena.

Member of the Romanian Parliament

Member of the Academy of Life

The Gospel and the Making of Europe

We need to know Europe because this is our land. In this video from the…

The video is available via this link: https://www.youtube.com/watch?v=KkGDkJouL84