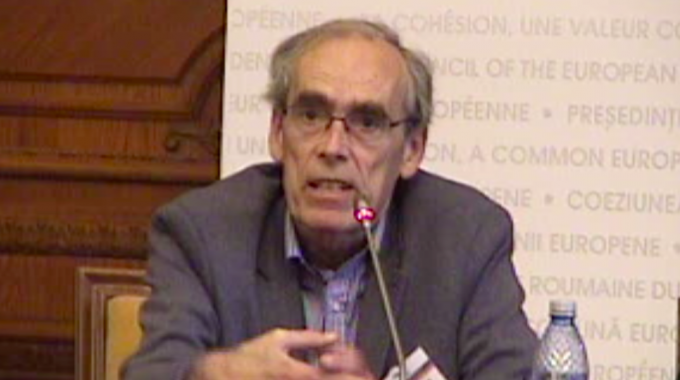 In a time of European history when many new populist parties have emerged, defining a general definition of Populism is not a simple task. In this video, Dr Evert Van de Poll helps us understand this new phenomenon. (We apologise for the missing part in the beginning)

From the State of Europe Forum in Bucharest (May 2019)

Socio-scientists say that the main characteristic of today’s so-called populist parties or movements is a vertical opposition between the people and the elite.

It is always playing the people against the elites, who can be bureaucrats, eurocrats, people in power, technocrats, the government in power, and so on. The narrative is ‘We, the people, want to get rid of them. We want to give back the power to the people’. So this vertical opposition is, according to socio-scientists, the essence of populism.

We find this kind of populism in the left wing and in the right wing of the political scene. There are left wing populist movements. There are right wing populist movements in Spain, in France and in other countries. So, it is a kind of playing off the people against the elite and it is a revolutionary mood. ‘We want to get rid of them’, that is populism.

Populism is not the same as nationalism. In nationalism, the opposition is horizontal. It is between us and them, between the people and the other people, between a nation and another nation, between the people and those who come in from outside, the immigrants, those who threaten our culture, the Muslims. This is a horizontal opposition and this is not necessarily populists. It can be linked with an authoritarian government. It can be linked with an elite. The basic thing is that it sets off a people against another people. It is not to be confused with patriotism. Patriotism is a pride in one’s own history; in the achievements and the values of one’s country. One can take pride in that without being a nationalist in the sense of opposing one nation against another, the native people against those who threaten their culture.

Nationalism is now very much on the rise among many political parties and it can become militant when there is an idea of superiority: ‘We are better and the others are enemies’. That is the kind of nationalism that Europe has known for two centuries, and we want to get rid of that, which is why we have the European community: we want to overcome our nationalism. But these two terms are rather negative. People do not usually call themselves populists or nationalists. They would call themselves patriots, sovereignists, radical left, illiberal or post-liberal, depending on other types. So these are the two oppositions and sometimes they overlap. But in these two movements, there is Christianity coming in. Why is Christianity coming in? For both populists and nationalists, people in these movements can defend the roots and the traditions of the society, defend themselves either against an elite, which is called ‘secular’, ‘atheist,’ or ‘anti-Christian.’ In the populist version, people keep these traditional values against the elite. The nationalist’s version however is: ‘We keep our Christian heritage and we want to defend it against Islam, against migrants, against Muslims, against the others’.

But what is this Christianity that is being defended? It is not a matter of religion but of culture, of identity. And so people are donating money to repair the Cathedral Notre Dame in Paris, because it is their culture, their history, their identity. ‘We do not go there, we do not pray there, it is just the stones that we want because that reminds us of an idealised past’. And one socio-scientist has called this a secularised, folklorised Christianity to illustrate that many adherents of populist movements and nationalist movements are not practicing Christians. They are secular or non-practicing Christians and many of them have taken on the value shift that I mentioned earlier on. They would advocate post-modern liberal values in marriage, family, sexuality, and in individual ethics, but they vote for populist and nationalist parties because they want to defend their country, their heritage and Christianity is becoming a symbol of that.

So you see a new dividing line rising between people who are very critical. There are overlaps between nationalists and populists and they have one thing in common: they are generally euro-critical and they are generally considering the European Union as a threat, either as a sort of elite that takes away the interests of the people or as opening the borders to an invasion, as they call it, of migrants and opening the borders to an Islamisation of society. This is now called the new dividing line, instead of the old left-right.

There is another dividing between, on the one hand, cosmopolitan people and a group we may call populists. Cosmopolitan people have a European outlook, feel at home everywhere in Europe. They are in favour of a liberal, open market economy, open borders, free travel. These people are generally the winners in the globalisation game. On the other hand there are people that some would call populists, others would call nationalists, but it’s a much larger phenomenon, who have a local outlook, who stress their cultural identity, their national identity, and they are in favour of a protected economy. They want the state to protect them and want to feel protected. They are usually the victims of globalisation. This is an interesting new dividing line that we see emerging in the political spectrum. And I suspect that when the new European Parliament will be reorganising itself, this dividing line will become very much apparent.

Finally, in his article that was published in the main newspapers in all the European countries, our French President Emmanuel Macron has proposed that the battle is on between progressive, cosmopolitan European-minded stream and a conservative, nationalist, populist stream. He says that this is the dividing line. Nevertheless I am not sure that only those who are cosmopolitan in ethics and economics can call themselves the real Europeans. I think that the people that are on the other side of the dividing line are as much European, but they simply have a different view on the European Union and on the task of the political parties and the state. They have another outlook but they are also European. I think this is the dividing line that we are going to see more and more instead of the old left wing-right wing dividing line.

Towards a European Union of values