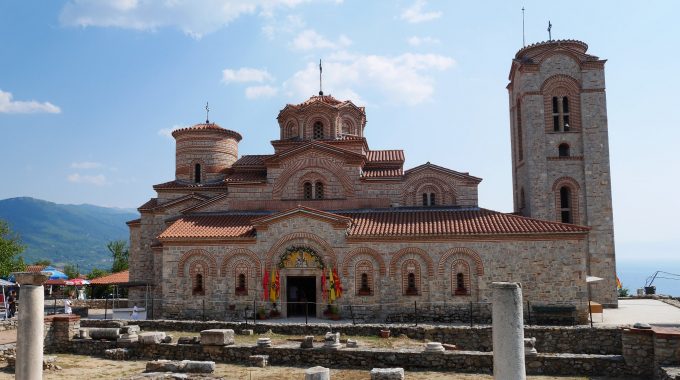 Today is the fifth and last stage of our miniseries exploring some of the history of the Orthodox Church.

During our previous episode, we visited the village of Velehrad in the Czech Republic. There we walked in the footsteps of two brothers and missionaries to the Slavs, namely Cyril and Methodius. I concluded the episode by saying that after their death, their disciples faced persecutions by the German Catholics and were finally forced to flee from Moravia.

So today, we will find out where these disciples settled, and one of those places was Ohrid in what is today North Macedonia. This is a city of slightly over forty thousand inhabitants located at the North-Eastern shore of the Lake Ohrid. The city is one of the main tourist resorts of North Macedonia. The national President, Prime Minister and other high state officials also reside there.

But Ohrid is especially a place of primary importance to understand how the Gospel reached the Southern Slavic peoples. Here we can also discover how it transformed the societies in these lands. To look into this, we will visit the old town which was built on a hill called Plaošnik already in Roman times. The hill is considered a holy place for the Orthodox Church even today.

What is the reason behind this?

We can find a clue inSaint Sophia, a church in the old town. Inside the church is a fresco depicting Cyril and a man standing next to him. We’ve already met Cyril last week, but who is the second person in the fresco?

The man in question is not Methodius as could be assumed, but Clement of Ohrid. The reason we find him standing next to Cyril is that he was one of his disciples.

So let’s take a look at his life.

Clement was born around 840. Although we can’t trace his story precisely, he probably met Cyril and Methodius for the first time in a monastery of the mountain Mysian Olympus (near present-day Bursa in Turkey). Clement followed the brothers on their various missions, first to the Khazar in Crimea and then to the Slavs in Moravia.

The close relationship he had with the brothers made him the natural leader of the mission in Moravia after the death of Methodius. Nevertheless, Catholic opposition in the region greatly increased during his life, to the point that he was eventually thrown into jail. After his liberation, he was finally expelled from Moravia together with others from the mission.

Clement crossed the Morava river and thus arrived in Bulgaria, which was a huge empire at the time, extending from modern-day Slovakia to North Macedonia.

The king of Bulgaria, Boris I, was quickly informed of Clement’s presence in the empire. This was good news for Boris, who had recently converted to Christianity. Christianizing the empire was, in fact, politically complicated for him. He knew that if he connected his church with Constantinople, the capital of the powerful Byzantine Empire, this would be a potential threat to the independence of his country.

Since Clement and his followers were learned and knew the Glagolitic alphabet invented by Cyril and Methodius (an early version of Cyrillic), their presence in Bulgaria seemed to be just what the king needed. Boris realised that Clement would be able to teach the Slavonic language and the Gospel to the people. This, in turn, would reduce the need for help from Constantinople and would help Bulgaria to maintain its independence.

King Boris thus commissioned Clement to organise the church and the education in the Slavonic language in the South-Western part of the Empire. For this purpose Clement journeyed to Ohrid, where he also settled.

Clement built a monastery on top of this very hill. He wrote prayers, hymns and homilies in the Slavonic language, thus allowing the locals to understand the Gospel. He also inaugurated the Ohrid Literary School. Some documents of the time reveal that he had no less than 3500 students in seven years.

Later, Clement was appointed bishop of a see covering the region, making him the first bishop of the Bulgarian Orthodox Church.

Clement died on the 27th of July, 916, and was buried in the monastery that he had built right here in Ohrid. Later on, the church he had dedicated to the early church father Pantaleon, was renamed in Clement’s honour and became the Church of St. Pantaleon and St. Clement. It is actually located only six hundred metres from Saint Sophia.

Clement’s work for church liturgy and education succeeded in bringing about the outcome king Boris had desired. It allowed the Southern Slavs to keep their language and culture, thus preventing them from being assimilated into the neighbouring Byzantine culture. For this reason, Clement of Ohrid is identified as one of the seven apostles of the First Bulgarian Empire.

During the last five stages, we have discovered some parts of the history of the Orthodox church. And even though church divisions have been the cause of a lot of sufferings, especially in the Balkans, we have also been able to see the positive transformation that God brought through the Orthodox church to many European lands.

https://soundcloud.com/aeuropeanjourney/a-european-journey-10-molochansk-ukraine The Russian Mennonites After England last week, we will now travel to a small…