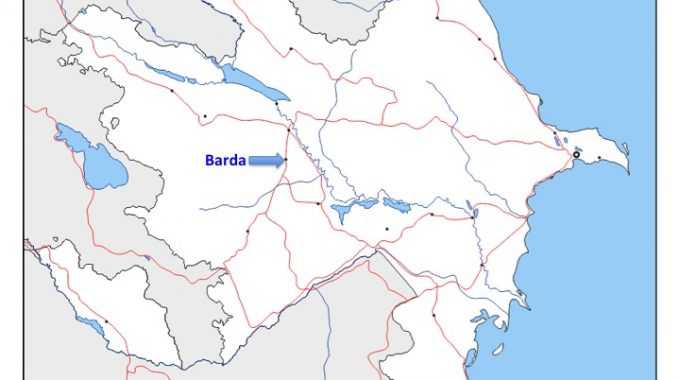 Last week as we were in Andorra we discovered that the choice of two names – Europe and Andorra – were influenced (directly or indirectly) by the Gospel. I also said that Christianity had breathed life into all spheres of life for several centuries.

And I ended with the following question: as Europe has been moving away from its own cornerstone for more than two centuries, what consequence will this bring? Can Europe keep its identity? Can it preserve all the fruits that the Gospel has brought to each sphere of life?

Actually the land we are going to visit today can give us the hint of an answer.

So today we will travel 5000 km and return to the Caucasian lands. And we’ll actually go 200 km East from Sighnaghi, where we were during stage 3, to a town of Azerbaijan called Barda.

Here the land is flatter than the surrounding nations in Caucasia. The huge arcade at the entry of the town and the mosques seem to tell us that Islam is the dominant religion here. Nevertheless, history reveals another story.

It is widely known that Georgia and Armenia were among the first European nations to embrace the Gospel. It is less known, however, that the nation we today call Azerbaijan also embraced Christianity around the same period.

Back then the land was called Albania (which had nothing to do with present-day Albania). To avoid confusion historians call it today Caucasian Albania but to keep it simple I will just call it Albania. The Albanians spoke a language called udi. The town in which we are today was called Partav.

When the kingdom of Armenia adopted Christianity as its official religion, king Urnayr of Albania went to Armenia to receive his baptism. The conversion of the king opened the doors for the Gospel. Finally the nation became officially Christian. The seat of the Church of Albania became Partav.

This conversion was significant because the Bible was also translated into udi. And this gave the language a written alphabet.

So why is the land that we are visiting today called Azerbaijan and not Albania?

To understand what happened, we need to go back to the time of the early Church councils. While most of these councils succeeded in rejecting heresies that had spread in the Church, others had a more painful outcome. And this was the case with the Council of Chalcedon (modern-day Turkey) in 451. The issue discussed there was about the way the divine and the human nature of Christ cohabitated in him. But in reality, the real issue was an ongoing power struggle between important church figures.

As history sadly testifies, this power struggle ended in a split. The Western church agreed with the Confession of Chalcedon; the Eastern church however rejected it even though both had signed the Nicene Creed earlier on. And like other splits, this one also had huge political and societal consequences.

Again here we shouldn’t confuse this split with the most famous split that occurred within the Western church some centuries later, this time forming two new camps: the Orthodox and the Catholics.

The Caucasian nations experienced the consequences of this split first-hand. The Church of Georgia chose to align itself with the West by signing the Confession. The Church of Armenia and the Church of Albania, however, refused to sign it.

And as if this was not enough, internal struggles between the Church of Armenia and the Church of Albania further weakened the Church and the region. Then in the 7th century, the Catholicos of Albania, Nerses Bakur, sought to sign the Confession. Well, this obviously further damaged the relationship between Albania and Armenia.

At the same time Islam was on the rise. And as Muslims were spreading their dominion, they came closer to the Caucasian lands. The Church of Armenia seems to have seen their arrival as an opportunity to sort out the issue with Nerses Bakur. And so with their help, he was murdered right here in this town.

What the Armenian Church might not have calculated then is that this would lead to the collapse of the Church of Albania. As Christianity hadn’t taken deep root in the land, Albania was very quickly almost totally islamized.

As a result, the Albanians had lost their language by the 11thcentury. And those who converted to Islam were assimilated to other Muslim tribes like the Azerbaijani Turks.

The town we today call Barda is an example of the damage that divisions in the Church can cause. All throughout history, Caucasia has strongly felt the consequences of the split of Chalcedon. The latest example is the Nagorno-Karabagh war at the end of the 20thcentury, a conflict only a few kilometres away from Barda that is yet to be solved.

This story could be read as a warning for the continent of Europe. The secular attempts to uproot Christianity and the sense of passivity in the European Church can lead to a similar loss.

But it’s never too late to wake up!

https://soundcloud.com/aeuropeanjourney/a-european-journey-96-oberndorf-bei-salzburg-austria In the nineteenth century, an Austrian priest wrote a poem beginning with the words Stille…