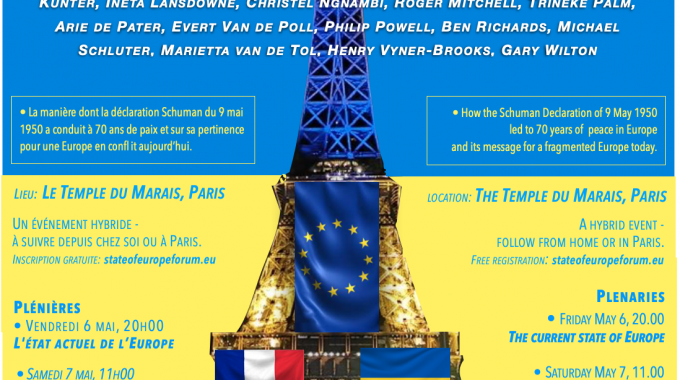 Participation is free of charge.

Plenaries will take place live on the youtube and Facebook pages mentioned bellow and recordings will be available afterwards.

• What is the current State of Europe after: Brexit, Covid, COP26, French and Hungarian elections, the Russian invasion ?

• Live link with Kyiv and then prayer for Ukraine

Plenary 3. ‘Knowing what God’s people should do…’

• A future and a hope: poet and author Gerard Kelly reflects on Jeremiah 29: seek the shalom of the city

• The ministry of reconciliation 2 Cor 5: 17-21    closing reflection from Pasteure Caroline

At midnight on January 31, 2020,  the UK became the only sovereign country to have left the EU, after  being a member state of the union and its predecessor the EC since 1 January 1973.  What does this mean for both the UK  and the EU for the years ahead? What role do the Christian communities play in this ‘post-divorce’ stage? What kind of European society can we envisage for a post-Brexit future. What role can chruches play in shaping this? Gary, an Englishman, has lived and worked in Brussels interfacing the Church of England with the European institutions. Marietta, from the Netherlands, lives and works in Oxford. They bring their collective experiences to offer insight on how God’s people can ‘seek shalom’ on both sides of the English Channel.

Seminar 2 – After COP26: Shalom in creation?

What did COP26 (UN Climate Change Conference, Conference of the Parties) achieve in Glasgow last December ? What are the current realities we face in Europe? What is our Christian responsibility towards these realities? Is this a distraction from our ‘real’ task of evangelism and church planting? After COP26, what should we do now differently?  How can evangelicals contribute to the future of Europe concerning creation? How can we ‘seek shalom’ in our European and global environment?

Recent elections in Hungary and France caused anxiety and incomprehension in many European circles. Both elections revealed strong undercurrents of nationalism and populism, and resistance to ‘Europe’. How should we understand these feelings and sentiments?  What genuine issues should we be noting and responding appropriately to? Is Orban leading Hungary towards greater autocracy in the name of defending Christianity? Is Marine Le Pen justified in celebrating her loss in the presidential vote as a victorious step towards the presidency?  How can our Christian communities ‘seek shalom’ in the midst of the fragmentation and polarisation within our nations?

Post-truth politics is a political culture where true/false, honesty/lying have become a focal concern of public life. Following the Brexit vote and the 2016 US presidential elections, the Oxford Dictionary chose the term ‘post-truth’ as  its 2016 international word of the year. Ineta and Mari are  both from post-communist societies, and Ineta worsk in the Occupation Museum in Riga. In this seminar they explore the dangers facing Europeans as influencers abuse language in ways foretold by George Orwell and exposed by Aleksandr Solzhenitsyn and Vaclav Havel. Timothy Snyder warns that ‘post-truth’ is ‘pre-fascist’ . ‘Seeking shalom’ in our fragmented Europe today means standing for truth against conspiracies, for which some evangelicals appear to be susceptible.

Seminar 5 – Can Schuman’s plan for reconciliation also work for Korea?

Michael Schluter will explain how a Korean Peninsula Agriculture Community, set in the context of ‘ever closer union’, similar to the trade agreement which started off the pathway to the European Union, provides a potential pathway which could lead to eventual reunification of the peninsula. For North Korea  to lose its negotiating advantage of refusing to engage, two essential preconditions must be met. The first is that the vision of potential future benefit must be substantial enough to make it worth losing that advantage; the second is that the first step must be small enough that the perceived challenges are manageable.

Seminar 6 – Can values and norms guide our defence policy?

Trineke,assistant professor at Netherlands Defence Academy, explores the roles of norms and values in shaping defence policy. Is it true, as some say, that ‘in war there are no rules’? Or is there a place for Christian ethics even on the battlefield and in the war room? The Geneva Convention, the UN Charter and the Universal Declaration on Human Rights were shaped by Christians and their values. Each is being ignored by today’s Kremlin. Russia’s invasion of Ukraine is forcing Europeans everywhere to rethink defence issues. Trineke’s doctoral research involved comparing EU stated normative ideals with US ‘realist’ or pragmatic policies. Are normative ideals ‘unrealistic’ in ‘seeking shalom’ in today’s conflict?

Seminar 7 – The return of the borders.

Europe’s borders present us several paradoxes today. The pandemic, the Russian invasion, migration, economic globalization and populism are all forcing us to think deeper about the role of borders. Walls are being built again between Europe’s nations. Are they barriers or protection? Is the choice between a cosmopolitan/liberal/progressive or nationalist/populist Europe? Are we understanding of movements concerned that their culture may vanish, as a result of demography and immigration? Borders are needed for people to live in security – physically, socially as well as culturally. How can we find the balance between protection and openness?

Seminar 8 – A theology for public life.

Is theology for academics in ivory towers debating obscure points of doctrine and church issues, or does it concern articulating vision for flourishing life, both personal and public – for all? How can theology guide politicians, educationalists, economists, journalists, artists, military leaders, city planners and development workers? What light  can theology shed on the future of Europe? Why do our evangelical theological institutions offer so few course applying theology to daily life outside of church and personal discipleship issues?  What needs to change? How can it change?

ww extra! – re Bridge to the future

Canaries in the coal mine

Following the killings of four Jews in a kosher market in Paris last month, commemorations…