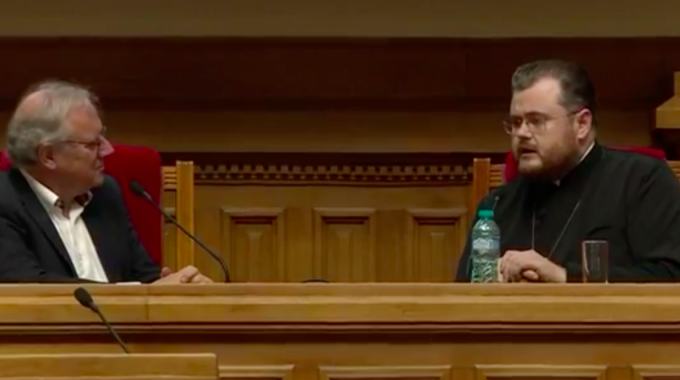 During the Europe Day Celebration, Jeff Fountain interviewed Pr. Ionut Mavrichi (Romanian Orthodox Church) to discover how the Nicene Creed became the foundational affirmation of faith which has shaped Europe.

JF: Father Mavrichi, you have described this Nicene Creed as being a part of your life from a very young age as one would imagine. How did this Creed come about and how has it shaped Europe?

IM: I must first say that I think the first one to recite the Creed was my grandfather for me. Vowing for me that I would be brought up in the Orthodox faith.

JF: At the time of your baptism?

IM: At the time of my baptism about forty five days after my birth. So I confessed, through my grandfather, the Creed from the very beginning of my life. But yes, indeed, it has been a very important statement of faith in the history of Europe. And we actually have a Romanian philosopher, Constantin Noica disagreed with Spengler when he said that the beginning of Europe was in the North of the continent. The true beginning of Europe, according to Noica, is to be found in 325 AD in this Council of Nicaea. The fathers that joined in the Council started from the revelation of God through Jesus Christ, the revelation of the Scriptures and the testimony of faith given by the Apostolic and Post-Apostolic Fathers. They managed, somehow, to convene and to establish a common formula of faith. Yes indeed, this common understanding of our faith has brought Europe together. And it has been like that for more than a thousand years. But, as you said, the addition of the filioque brought about some very interesting controversies.

JF: Now, can I ask you about that? Because I know that in Eastern Europe, people are brought up with an awareness of what that phrase, filioque, means. But in the West, perhaps an earlier generation may have, but our young people today would have never heard of filioque. Could you explain?

IM: Yes. So the articles of faith that were added at the Second Ecumenical Council, in 381 AD in Constantinople, regard the person of the Holy Spirit. And from the testimony, that we can actually find in the Gospel of John, where it clearly says about the Spirit that he is proceeding from the Father, the fathers of the Council introduced that statement into the Creed. So in the original Greek form, we can actually read that the Holy Spirit, the Lord and Giver of life, proceeds from the Father. Well, in the sixth century, for various pastoral reasons, the Western church decided to add two small words ‘Who proceeds from the Father and the Son,’ in an effort to try to make it clear that the person of the Son, is God as well. Because they were dealing with the Visigoths who were Christianized in the Arian form, which denied the divinity of Jesus Christ. Of course, the East has always reproached the West that they have added this formula within the Creed that was universally accepted.

JF: So, it was an addition that was not through consensus and consultation, but just a one-sided addition.

IM: Yes. But in order to be fair about the subject, it must be said, that when the Fathers of the Second Ecumenical Council (Constantinople – 381 AD) added the articles of faith, the Church of Rome wasn’t even aware of the modification. Actually, the Third Ecumenical Council (Ephesus – 421 AD) did not mention the Second Ecumenical Council and referred only to the Nicene Council. But the whole formula of the Creed was universally accepted at the Fourth Ecumenical Council in 451 AD. Of course, there are several and very intricate layers of theology and debate about this addition. This is not actually the place to discuss that, but we must admit that, indeed, the filioque was invoked as the main reason for the schism and it remained like that for several hundreds of years. What is interesting is that in 1995, there was a clarification given by the Pontifical Council for the Unity of the Church, asked by Pope John Paul II, that tried to make clear that the formula, filioque, is somehow consistent and does not deny the formula of the First Ecumenical Council. That actually represented a very important step stone in the official dialogue between the churches in order to somehow reach the unity. Nonetheless, it has been the formula that gave us the structure of our belief and has made Europe what it is. Even though, if we look at the map, for example, at Western Europe and the numbers about Christianity, we might be a little bit disappointed about the future. But as recent events have shown, we are still under the spells of the cathedrals. And I think there is hope. And you said, always the Church survives through small elects or faithful minorities. As long as there is faith and as long as this Creed remains in our hearts, there will be hope for Christianity in Europe.

JF: So there were a number of factors that built to the schism of the 11th century, 1054 AD. It wasn’t the only factor. Part of it was the coming up of Islam, the Patriarchal cities of Jerusalem, Antioch, and Alexandria had been lost to Christianity. So now we had a polarized Christianity around the Latin Kingdom and the Greek Empire, shall we say, and that led to a power struggle. So although, there was a theological issue, an argument about the Holy Spirit at the core, there was a lot of power politics going on as well. Now, this actually led to mutual excommunication for 900 years until Vatican II. And actually I’ve been in this office of the Pontifical Council for Church Unity and I saw an icon there of Peter and Andrew that was a gift from the Eastern Church to the Western Church, I think possibly on the occasion that you were talking about because here were two brothers: Andrew who represents the Eastern Church and Peter, the Western Church. So, if we are looking to the future, I understand that Pope Francis and Patriarch Bartholomew called for a new Nicene Council on 2025, the 1700th anniversary of the original Nicene Council as a further step towards healing that breach. But can you just say something about, is it too much to say, that this breach has caused a spiritual fault-line that has affected the political, economic, social, and spiritual history of Europe throughout those 900 years?

IM: I think it is as you say. There is a very interesting sociological theory called the, ‘Thomas Theorem.’ If a group of persons believe a situation as being real, the situation becomes real in its social consequences. Therefore, what we believe, our core beliefs, become real for social consequences. If our creeds differ, we behave differently. And again, sociology shows that, for example, it’s easier to be close to a person that has very different core values than yours, than to be close to a person that shares the main values but differs slightly. That’s why we have always perceived this minor difference as being major. I don’t know if God will make the unity of his Church happen in our lifetimes, who knows? What I can say, is that if we are true Christians, if we are true to the Scriptures, the division within Christianity should cause us pain. If we do not long for the unity as Jesus longed in his prayer, we are not true witnesses of Christ. And once again, we are open to this Christian past of Europe, but we can also see a Europe who tries to reinvent itself, denying the Christian roots. Hopefully, we will come to our senses as Europeans, because I don’t think we are bipolar. I, as a European citizen, am not different from a non-Christian and therefore I think my values should be represented at the European level, if we are strong enough in our beliefs.

JF: We find ourselves now, within this European project that interestingly has started to bring East and West together. It has only been a few years since the sudden expansion of the European Union, into what is now 28 (or whether it is going to become 27 again…we’re not sure). But it is forcing us in a project that talks about ever closer union, not of states, but of peoples. Now how can we grow in mutual understanding, East and West, when we have faced this divide of actually, a lot of suspicion and mistrust through many centuries?

IM: Well, the only thing that we share is our common Christian past and also our economic interests. We must recognize that as well. It’s not only a historical endeavour here. But I think the struggle to witness Christ will bring us together again. The sparkle has started in Paris. May that be the beginning of our awareness.

JF: Yes. Well, as we read this Creed, we could all say ‘Amen’ to the doctrines there, and yet, as you said, we tend to emphasize where we disagree. And so, to be able to find the areas that we agree on, here is surely ground for us to grow in mutual understanding and to become closer as peoples together. And that’s really at the heart of this European project.

IM: Yes indeed. And that’s why your project as well is very necessary and blessed and may God bless your endeavours.

JF: Thank you. Now this was a very interesting point that you started with that quote about when Europe really began, in 325 AD. And that is well worth thinking about.

Orama: a place of vision

After flying for a day and a half from Europe, you may think you have…

The Happiest People on Earth?

Bold and enticing, the innovative Helsinki Central Library is a ‘city living room’ for young…

What charter for humanity? Defining the destination of ‘development’ (2/5)